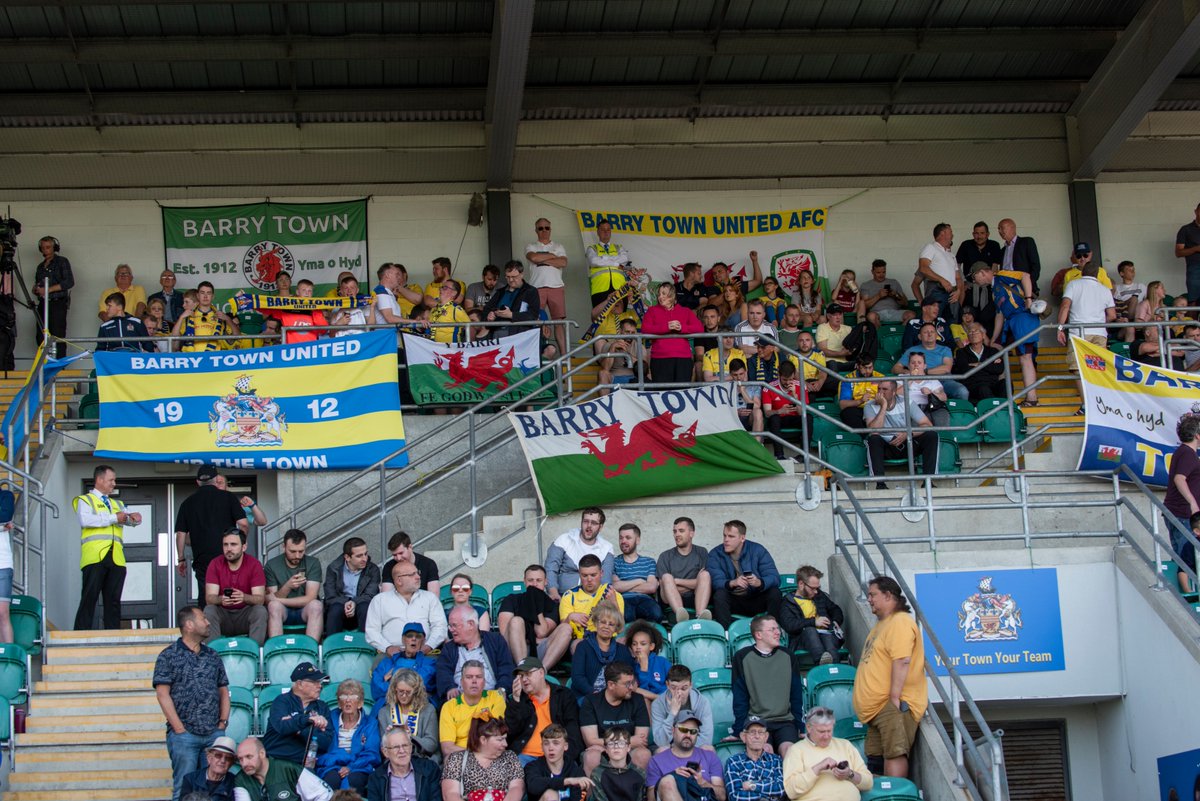 Barry Town fans sang, chanted, jumped and clapped their way through the club’s first European tie in 16 years – a goalless draw against Cliftonville.

More than 2,100 spectators turned out for the Europa Cup clash against visitors from Belfast at the Cardiff International Sports Campus, Leckwith including around 300 from Northern Ireland. The Barry faithful were loud and proud – and visiting Reds fans made themselves heard.

The Barry faithful brought drums and loudhailers, making their passionate support more than clear on a hot, sunny evening.

Barry manager Gavin Chesterfield emerged from the dressing room to say: “I have to give the lads huge credit. We were up against a seeded team and this was our first time in Europe.

“I’m proud of that performance, but I also know we can play even better. That’s a real positive.

“They key is that 0-0 at home isn’t such a bad score. I’m proud of the lads and the way they stick together. My players will grow as a result of the experience.

“We had an amazing attendance. That was really humbling and fantastic for our lads.

“Cliftonville are a good club with good people. Their supporters travel and our fans will travel in numbers. There is a lot of mutual respect between the clubs.

“We have hope in the second leg, of course, and I feel we have a goal in us,. Tough place to go, but we are halfway through the tie and the teams are locked at 0-0.”

Chesterfield was happy his team stayed organised and disciplined throughout. Barry denied Cliftonville an away goal and the tie is evenly balanced for the second leg in Northern Ireland next Thursday.

He will also be disappointed his Barry team did not provide better service to hard-working striker Kayne McLaggon, who scarcely stopped running.

The former Merthyr Town striker, born in Barry, worked through the middle, tried his luck out wide, but this wasn’t his night.

Paddy McLaughlin, Cliftonville’s manager, was adamant, saying: “We dominated the game and played some good football in the second half.

“The pitch was slick, although it dried out in the seconds half and the hot weather conditions had an impact.

“Our support at home will give us an extra 10 per cent or more in our performance. If we dominate next Thursday as we did in this game we will be okay.

“The atmosphere was fantastic. Two teams with great support. Barry worked hard and we give them credit, but we should be strong enough at home.”

Visiting Cliftonville fans overcame a drama after a Flybe flight from Dublin to Cardiff was cancelled – and the next flight into the Welsh airport would land just over an hour before kick-off.

Plans for a relaxed trip were plunged into chaos when Flybe reportedly notified passengers after 1am that the 8.35am flight would not be leaving Dublin.

The airline has since explained the cancellation was due to ‘crew sickness’ and offered passengers the opportunity to board the next available flight.

Great result today and huge shift from every1 to take away with us next week, support was massive from everyone! Thank you all ❤️

Some Reds supporters quickly rearranged travel arrangements. Some flew into Manchester and a section of the support now said to be flying to Manchester before boarding a four-hour train to South Wales, while others opted to fly into Exeter and hire a car for the two and a half hour drive to Cardiff.

Both teams earned almost £200,000 for qualifying for Europa Cup football and that will double for the eventual winners over two legs. Whoever comes out on top plays Haugesund of Norway.

Cliftonville manager Paddy McLaughlin took charge of his first European game in charge of the Reds – and it was the same for Barry’s Chesterfield.

Mike Lewis was in goal for Barry, while teenager George Ratcliffe, signed on loan from Cardiff City, was back-up ‘keeper.

It was an evenly matched, goalless first half, although Cliftonville’s Aaron Harkin was given too much time and space to dictate play in central midfield.

Lewis made a tremendous save with his feet when Cliftonville captain Chris Curran found space inside the penalty area, while Jon Hood had the best chance of the opening 45 minutes.

He found space on the right-hand side of the penalty area and had support in the middle. Unfortunately Hood, usually highly reliable, seemed to be caught in two minds.

He failed to either shoot or pick out a team-mate and goalkeeper Richard Brush saved his mishit effort comfortably.

Cliftonville began to look more dangerous in the second half and it was clear goalkeeper Lewis was struggling with a leg injury. His movement to his left was restricted when Rory Donnelly went for goal from 20 yards and the shot flicked off the outside of a post.

Lewis went down again, but opted to play on after treatment. Barry must have felt their ‘keeper was okay because they sent on substitutes Drew Fahiya and Troy Greening just after the hour.

Cliftonville host Barry in the second leg at Solitude next Thursday (kick-off 7.45pm).