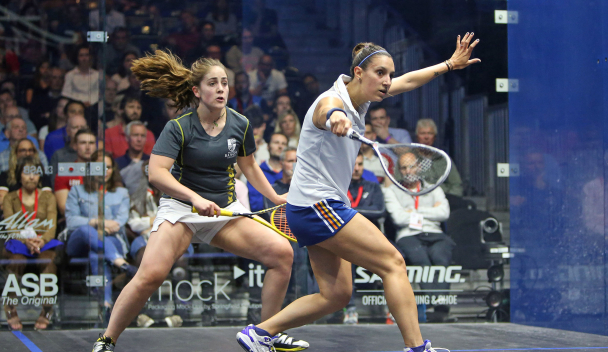 During a gruelling clash, which lasted an hour and 12 minutes, lost the first game 14-16, but then hit back to go 2-1 ahead.

At that stage Evans needed one more game during desperately tiring rallies the players fought with everything they had.

World number six Serme extended her 100 per cent record against Evans on the PSA World Tour, making it seven victories out of seven.

A lengthy first game set the tempo for the match with the lead exchanging hands a number of times before Serme took it 16-14.

Evans, who knocked out fourth seed seed Joelle King in the previous round, fought back in the second and third, unsettling Serme and winning both.

Both players continued to produce some excellent squash with their contrasting styles throughout the evenly balanced affair to treat the packed crowd at Hull’s Airco Arena.

“Tesni has had an amazing season,” said 29-year-old Serme.

“I’m certain she is going to make it to the top 10 very soon. I watched her play against Raneem at ToC and then against El Tayeb in Chicago. She lost 3-2 but was so close each time.

“It was a big battle today and I was enjoying it while we were both working really hard.”

There are two Egyptians, a French player and England’s Laura Massaro in the last four.

Nour El Sherbini, the 2016 British Open champion, battled back from 2-1 down against England’s Alison Waters to book her place in the semi-finals for the third time in her career.

Waters took advantage of a bad start from El Sherbini as she claimed the opening game to ask questions of the World number one, who struggled to put sustained pressure on Waters with the Englishwoman looking sharp on court.

The Egyptian grew in confidence in the second after a shaky start to level the scores, but squandered three game balls in the third as Waters was able to reclaim control of the encounter after some ferocious squash from both players.

There appeared to be a change of pace in the fourth with Waters complaining of dizziness on court and looking uncomfortable for a few points as El Sherbini was able to press on before then taking the fifth to book her place in the semi-finals 6-11, 11-4, 11-13, 11-7, 11-5.

The clash lasted just under an hour.

“I don’t know what was happening in the third,” said El Sherbini.

“Alison came back strongly and was playing so good, but I was glad I had my coach with me and he told me to keep going.

“Playing other Egyptians is the worst, I don’t like playing any Egyptian because we are all really good friends and travel together and it’s hard to play every tournament against each other and you always have to change your game and your plan to do something different.”

El Sherbini plays Laura Massaro (England) in the semi-finals, a repeat of last season’s fixture where Massaro came from 2-0 down to win and reach the final.

“At 7-3 down in the second I just thought ‘why have you gone away again?’,” said former World number one Massaro.

“It seems to be the theme of my season to get in a position to win or at least go up and go soft and that’s all mental. So, at 7-3 down, I just thought ‘why not?’ and ‘why can’t I go 2-0 for a change and have to hang on and battle in the third’.

“I’ve seen how Nour (El Tayeb) has been playing and how she has improved. She is part of the reason that I’ve been training so hard because of how she’s been playing and changing the game and what she’s doing to it.

“But, I also didn’t like the way she showboated and played so amazing against me in the US Open. It was borderline cocky and I wanted to get my own back for that, but she is bringing a whole different flair and it is what the squash game needs.

“I just said to her at the end that she has my 100 per cent respect because what she’s doing is awesome, but I really wanted that today.”