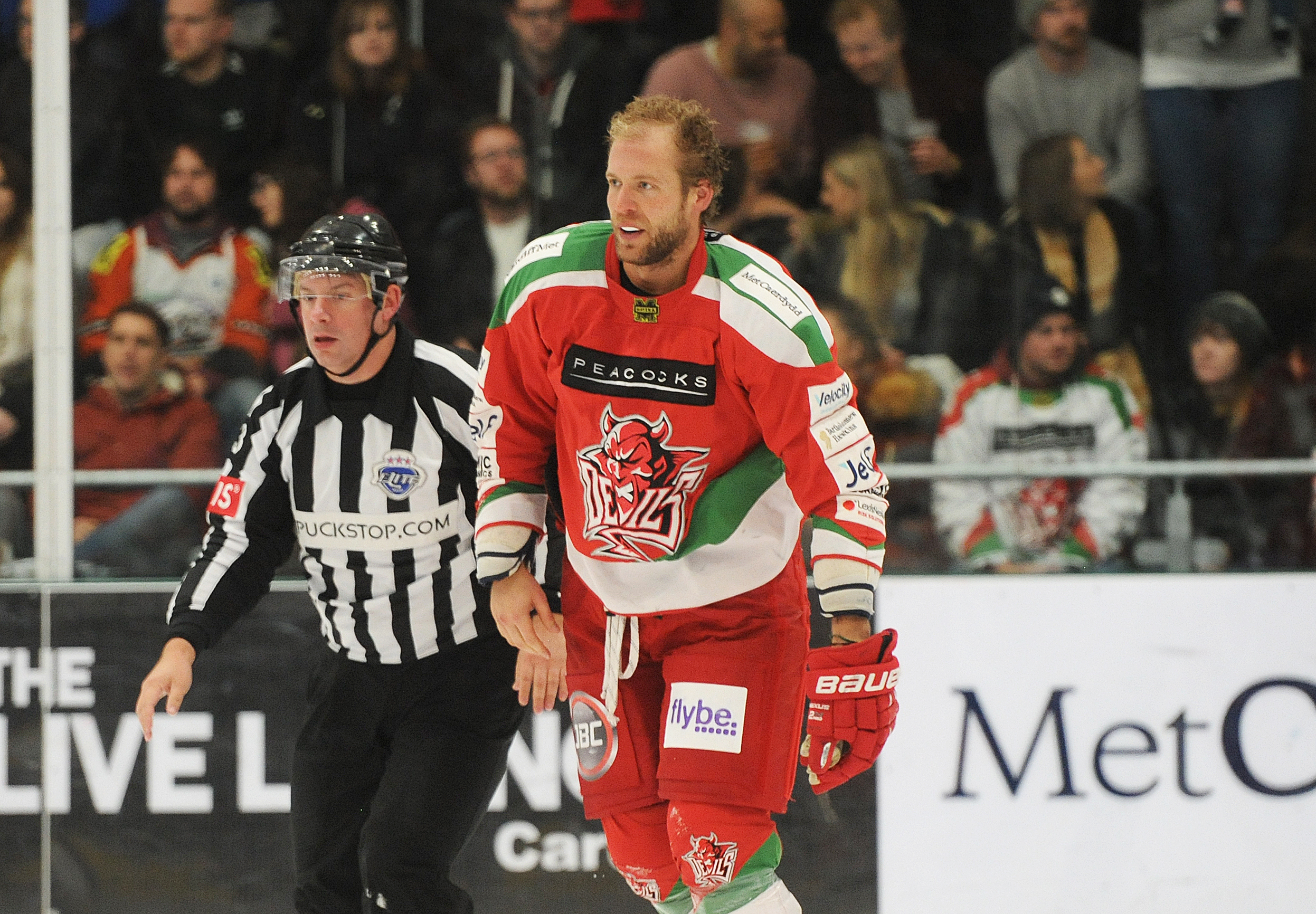 Devils powered to victory with Charles Linglet and Gleason Fournier scoring two goals each and head coach Andrew Lord said: “We’ve missed him for the best part of five weeks and it’s great to see him back playing.

“What a competitor, finishing checks, moving his feet and he has a good shot on him.

“He helps give us an incredible amount of depth and that makes me think what might have happened if Justin – and the new D-man we would like to sign – had been available for the Champions League.

“We were happy with the first period against Steelers. That was one of our better ones this season. When we play like that it’s a lot of fun.”

League leaders Fife are at Ice Arena Wales today (4pm face-off) and Lord said: “They have a great team.

“They have always had six or seven high-end forwards and now they have at least nine. Fife have speed, play off the rush, have a solid D-corps and an outstanding goalie (Shane Owen).

“Flyers have a phenomenal powerplay and are well coached. It’s going to be a great game.”

Devils were ahead after 16 seconds against Steelers and made it 2-0 48 seconds later.

Linglet scored a third in the seventh minute and that saw the end of starting goalie Jackson Whistle, who was replaced by Brad Day

Day conceded his first in the 11th minute when Fournier scored on the powerplay.

Linglet scored the only goal of the middle period to extend the Devils lead to 5-0 by the 40 minute mark.

Stefan Della Rovere broke away shorthanded to open the Steelers account and score the club’s 1,300 goal on the road in the history of the EIHL.

Devils rounded off the scoring with goals from Layne Ulmer and Fournier.

Man of the match: Gleason Fournier.

There are four Elite League fixtures and one in the Challenge Cup on Sunday.

Leaders Fife arrive in Cardiff looking to cement their position at the top against the Devils who are just three points behind.

“We’re in for a special game at home,” said Devils coach Andrew Lord. “Fife have had a fantastic start to the season and still haven’t lost in regulation in the league.

“They added talented players in the summer and seem to be just going from strength to strength.

“They caused us trouble last year on several occasions and we’re expecting another difficult game. It will also be the first time we play against Paul Crowder so that adds another layer to this game.”

Fife coach Todd Dutiaume says: “The important thing is that we have to play the right way for 60 minutes.

“We’ve been guilty a number of times over the season of not doing that.

“For us to seriously compete in this league night in night out, we have to compete for 60 minutes. It’s been a wonderful start, we want that to continue, but we still have a few holes that we need to plug.”

Panthers conceded 13 goals in their previous two Scottish road games, but arrive in Dundee to face a Stars side that have lost their last seven consecutive league games in a row.

“It will be our first time playing against one of the league favourites,” says Stars coach Omar Pacha. “It will be a good test to see how we match up against them.”

It’s seven league wins in a row for the Belfast Giants as they play the last in their three-game road trip tonight in Guildford. The Flames will have the advantage of not having played so far this weekend, but are going in to the game off the back of three straight league losses.

In the Challenge Cup, Coventry Blaze are at home against MK Lightning (Tickets | Webcast).