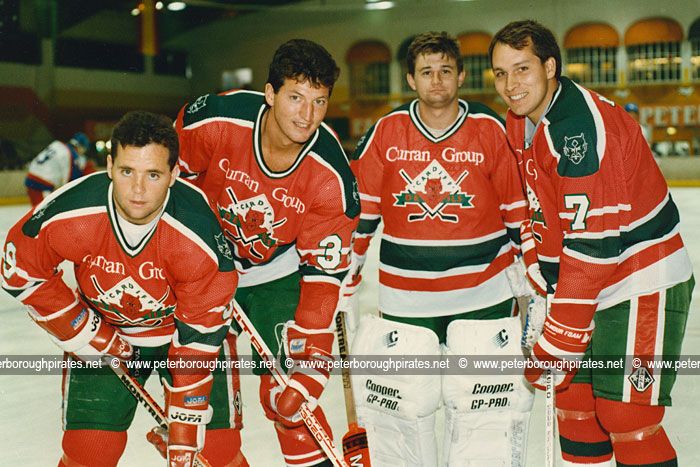 Lions take on a Cardiff Fire team who have won their last three matches and are focused on continuing their drive up the South table.

Canadian McEwen, nicknamed ‘MC’, was widely regarded as one of, if not the most, talented Devils ever to ice for the club, scored 234 points for Lions (129 goals/105 assists) in 51 appearances for Lions before coming to Wales in 1989.

He played a key role for Devils in League title, play-offs plus cup victories and played in 667 matches for the club during a decade in South Wales.

Joey Martin, one of today’s Cardiff stars, is known as the ‘GOAT’ – Greatest Of All Time – when McEwen’s was simply called ‘God’.

He scored a remarkable 730 goals with 752 assists, tallies which add up to 1,482, albeit during an era when standards were some way lower than they are in 2018.

‘MC’, a hugely skilled and effortless skater, could turn and win games with his relentless backchecking, prolific scoring and total reliability in all situations.

He will always be remembered among the Devils faithful and his retired number 7 shirt hangs high above the pad at Ice Arena Wales. Those who were supporters in 1994-95 still talk about his ‘skating lesson’ goal when he led a chasing, hapless Rocky Saganiuk (Durham Wasps) twice around the Cardiff net before leaving him for dead.

‘MC’ then skated coast to coast and roofing the puck for one of or possibly the greatest ever Devils goal.

The current Lee Valley Lions are, of course, completely different to the club McEwen played for and Cardiff Fire are intent on earning an NIHL home win.

Fire, who have changed their fortunes in a far shorter time, travel to face Slough Jets on Saturday before taking on the Lions at home.

Cardiff made a terrible start to their season, losing against Basingstoke (3-4) and Jets (2-7), but have bounced back with three wins and shocked one of the title favourites, Bracknell Bees, in their last home fixture.

McEwen himself would have loved that game with Fire hitting back from 9-6 down in the closing stages to clinch a 10-9 win.

Their spirit, character and sheer will-to-win was remarkable and Bracknell could not cope with the ferocity of the home players.

Fire have also defeated Invicta 4-2 and Bristol Pitbulls, at their temporary home in Oxford, and won 5-2.

“We made a few changes to our practice sessions and are going in a new direction in terms of how we train and systems,” says Mark Cuddihy.

“The players are loving it, really happy. It’s been a complete change from the first two games and three wins have lifted everybody.”

“We are all a close unit, getting the job done,” said Cuddihy. “Our target is the play-offs, but after we defeated Bracknell who knows?

“They are second favourites to win the League.We’d love to challenge the teams at the top. ”

First up this weekend is Slough Jets away on Saturday and that will provide a measure of how far Fire have progressed.

“Slough didn’t just beat us, it was 7-2,” said Cuddihy. “They have recruited the best young players around their area and were training through the summer without a break.

“They are the number one team in their rink and should really play in Division One. They are heavily sponsored and their coach, Lukas Smital, has done really well.

“He runs his own academy and it’s all working well for them.

“They caught us on a game where we weren’t with it and beat us by five goals. No way they will do that again. We’ll see what happens, but our guys are way more prepared now for Saturday than they were the last game against Jets.

“Everything is looking positive. In the first couple of weeks things didn’t go well, but the changes which have been made have created a whole new feeling. The players have bought in 100 per cent and are really happy.”

Hnilica, aged 25 and from Prague, has played a number of seasons in the NIHL North in recent years.

He scored 42 points in 52 games while playing in NIHL North Division One between 2012 and 2015, for Trafford Metros and then Manchester Minotaurs.