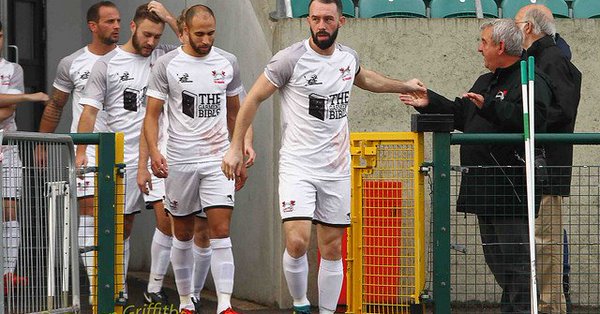 It was a second round tie between two Welsh League clubs with strong links to the late Tony Wilcox.

Former Cwmbran Town manager Wilcox, who led the Gwent club to success during 11 years in charge, passed away in 2003 while he was on his 40’s.

It was at Ton Pentre that his playing career came to an end through injury.

Wilcox was appointed Cwmbran manager in 1991 and the Crows were first winners of the League of Wales title during 1992/93 first Welsh club to compete in the Uefa Champions League.

Over the next decade Cwmbran established themselves among the leading clubs in Welsh domestic football.

Rhondda Bulldogs Ton Pentre opened a 2-0 lead against Cwmbran thanks to goals from Price just after the half hour and then on 36 minutes.

Cwmbran pulled a goal back, but Ton held on for victory.

Ynysddu Welfare are a tier five club on the charge and they sealed a place in the Welsh Cup third round thanks to a 3-1 win at Monmouth Town.

The Gwent County League side fell behind in the second minute through Leo Ross, but responded with two first half goals from Ethan Shide and Lewis Barnett. Holding Monmouth at bay during the second half, they eventually wrapped things up through Leigh Sharp’s late penalty.

Sully Sports, a third tier five club along with Cwmbran Town and Ynysddu, went down 3-1 against Cwmbran Celtic.

The students fought back from two goals down to make it 2-2, but went in at half-time 3-2 down.

University had also missed a penalty.

County found themselves level again at 3-3 with 15 minutes left, but Pemberton netted a winner following a long throw after 89 minutes.

There were six different scorers for Pontypridd Town, who beat Goytre 6-3, while Pontyclun lost 1-0 at Goytre United with Chris Bell scoring an own goal.

Six Airbus UK Broughton players were on the scoresheet in their 9-1 win over Llay Welfare, while Prestatyn Town defeated Berriew 6-3.

Dyffryn Nanttle Vale led 2-0 and 3-1, but lost 4-3 at Guilsfield as Jack Harris scored an injury time winner from the penalty spot for the mid-Wales side.

Llangefni Town were the only non-Huws Gray Alliance side to progress from the north. The Welsh Alliance leaders put five past St. Asaph City.

Holyhead Hotspur won 3-1 against Ruthin Town, while Denbigh Town won by the same scoreline away at Buckley Town.

Post Match reaction – JD Welsh Cup
Listen to the views of Richard Williams Cooke after the 3-1 against Caersws to secure a place in Round 3https://t.co/HkLeqQQcia via @Audioboom

Kristian Pierce (penalty, 43 mins), Joe Sullivan (63) and Reece Fairhurst (65) scored for Rhyl in their 3-1 win against a spirited Caersws.

Rhydian Davies replied for Caersws after 84 minutes, but that was no more than a consolation and Rhyl extended their winning run to five matches.

Sullivan made his full first team debut and showed a lot of promise.

Porthmadog booked their place in Monday’s draw with a 4-1 win away at Llanfair United, while Flint Town United defeated Gresford 3-2.

Flint’s midfield trio of Richie Folks, Brandon Burrows and Ryan Smith were a driving forceful the Silkmen, but Gresford went ahead after 36 minutes. The Colliers were awarded a corner and when Flint failed to clear Owen Roberts scored with goalkeeper Aaron Jones unable to get there.

That proved the only goal of the first half and captain Richie Folks scored from the spot to make it 1-1.

Sam Hart and Jacques Welsh were strong in defence for Flint, who went ahead when substitute Jack Higgins scored.

The match was going into injury time when a Gresford defender slipped and Socrates Martins raced away, stayed composed and finished clinically to put Flint 3-1 ahead.

Joe Davies headed in soon after, but that proved no more than a consolation.