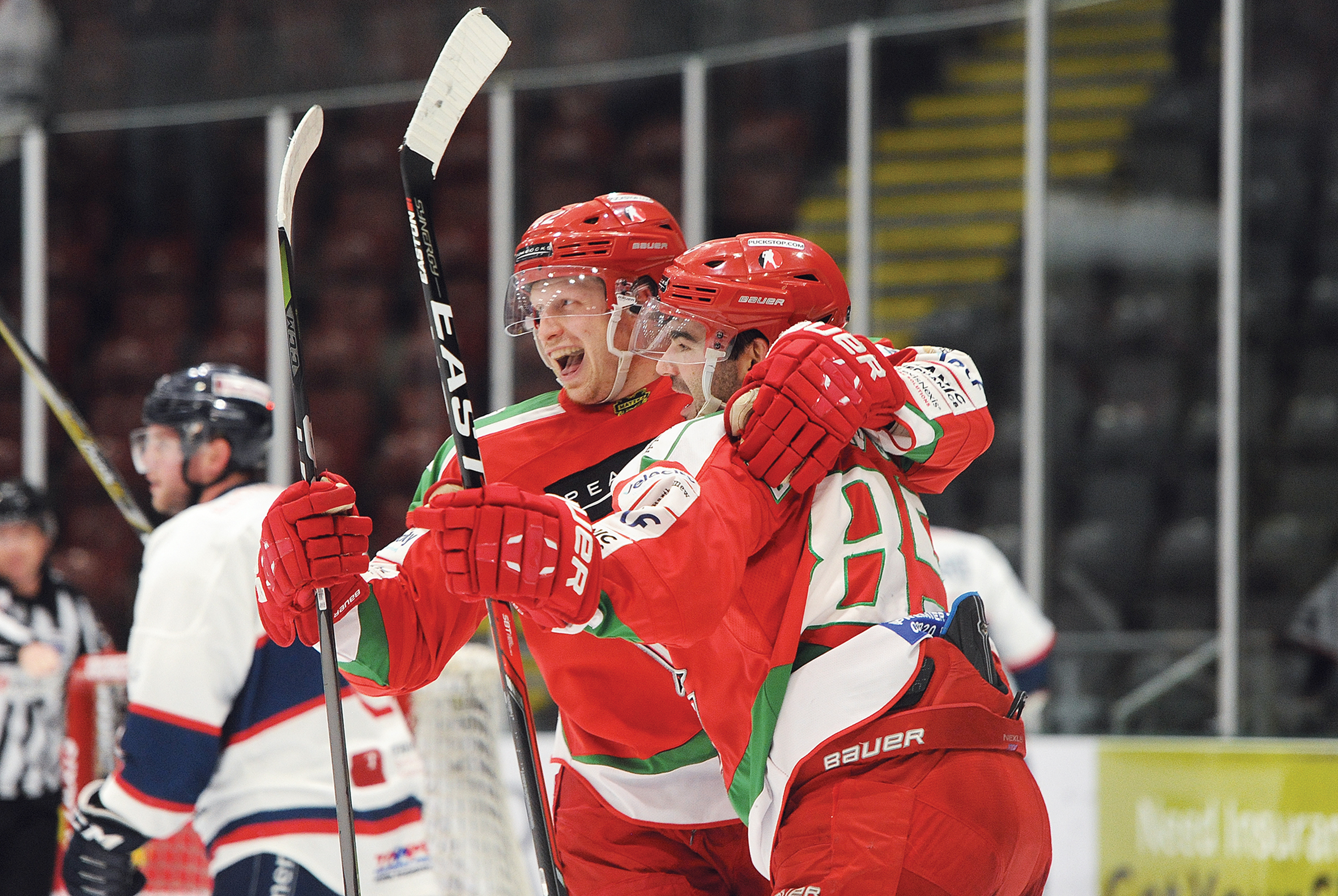 In other midweek matches both leaders Belfast Giants and Sheffield Steelers suffered defeats.

Giants went down 6-4 at Dundee Stars and the two points for Devils leaves them one point behind top spot with a game in hand.

“The boys brought it tonight,” said coach Andrew Lord. “It was fun. I’m proud of the players to a man.

“They brought it physically, mentally, emotionally. Super charged from start to finish. We were not going to be denied.”

Drew Shiestel returned to action for Devils following the departure of Justin Faryna, while Mark Richardson is close to playing again but Lord is giving him a little extra time.

Gleason Fournier was man of the match and Lord said: “He was incredible.

“When you see the way he played against Flames it’s difficult to see how he is not in North America at an extremely high level.

“An unbelievable skater who added physicality, intensity and a willingness less to get the job done.”

Devils were forced into overtime for a third successive match and it was Gleason Fournier who scored the winning goal.

Flames led 3-1 just after the halfway mark before the home team hit back to win.

Head coach Andrew Lord’s Devils were one of three teams nominated for the BBC Team of the Year award, along with the Welsh Commonwealth Games squad and Cardiff City FC.

“This is an incredible honour to even be nominated,” said Devils Welsh forward Matthew Myers. “We won last year and didn’t expect to win again.

“We know we had another great season and it feels as though teams are gunning for us in 2018-19. But we are at it every day trying to keep our title and we would love to be up here again next year.”

Almost 3,000 spectators were at the Viola Arena for Guildford’s visit and Flames were given an early boost when a penalty was called against the home team for a face-off violation 13 seconds into the game.

Flames made it 1-0 on the powerplay with Jesse Craige scoring at two minutes 13 seconds just as Matt Pope was about to step back onto the ice.

Devils made it 1-1 with a powerplay goal of their own when Layne Ulmer fired the puck top shelf over the shoulder of goalie Chris Carrozzi at 26:27.

Four minutes later Flames were back in front thanks to an impressive individual effort from Kruise Reddick, who danced around a Devils defender and fired the puck low past Ben Bowns to give the visitors a 2-1 lead at 30-42.

Two minutes later the visitors extended their lead when Evan Janssen fired in (32-46).

Charles Linglet (34-20) and Joey Martin (45-52) scored for Devils with Pope playing a big role in that third period strike.

With a Flames defender holding the puck, Pope threw a big hit on him, battled to win possession and found Martin all alone in front.

He fired low past Carrozzi to tie the game up at 3-3.

Man of the match Fournier scored the winner with 36 seconds of overtime left when he fired a wrist shot through traffic from the blueline that beat Carrozzi to give the Devils a 4-3 win.

There were 24 goals in three games on Wednesday night as Stars shocked Giants, Clan defeated in-form Steelers and Devils won by the odd goal in seven.

Giants led twice in Scotland, while the score was 2-2 going into the third. That final 20 minutes belonged to the Stars, they opened a 6-3 lead and Francois Bouchard completed a hat-trick.

Coming off the back of a win over league leaders Belfast, Steelers were full of confidence going into Glasgow. But Clan moved to within a point of them with their third win in five.

The home team led 4-0 going into the final 11 minutes and Glasgow held on for victory.

TICKETS – You can still buy tickets for Devils home game ONLINE HERE or by calling 0800 0842 666 or in person at the reception desk at VIOLA ARENA.