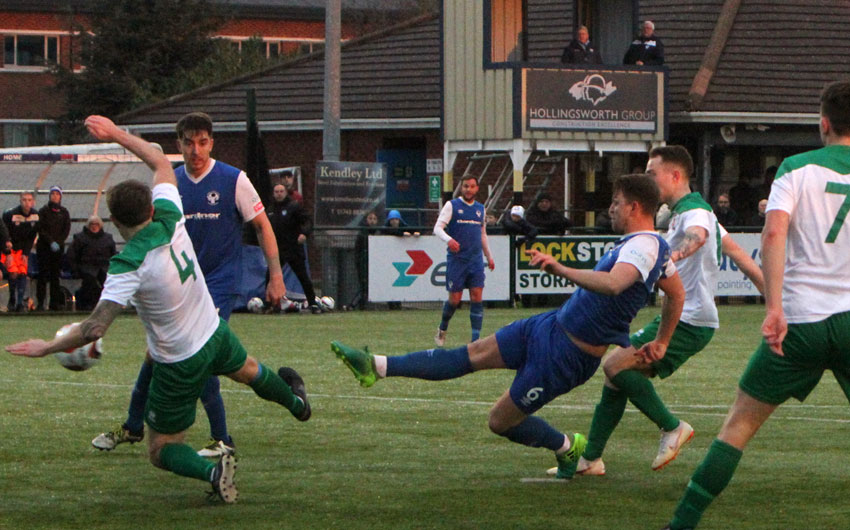 Kristian Platt scores the Airbus equaliser Prestatyn, who went on to win the Alliance clash 2-1.

Marc Williams and substitute Sam Jones scored Bangor City’s goals in their away win against Buckley Town away in the Huws Grey Cymru Alliance.

It was a timely win for the Citizens on the same day runaway leaders Airbus Broughton suffered a home defeat.

“I cannot fault anyone. They all put the effort in and I the quality we had coming off the bench with the young lads was superb.

“We need consistency. Everyone knows the standards we set ourselves and we need to produce that each week.

“They were all spot on and right the way through the game they were excellent. Magnificent.”

Bangor will look to move closer leaders Airbus on Friday when they are at home against Denbigh Town at the VSM Stadium on Friday (7.30pm).

They also have a game in hand on the Wingmakers and still have to play them once more in the Alliance this season.

Alex Darlington missed an early Bangor penalty when his spot-kick was saved by Joe Makaruk after the goalkeeper fouled Taylor Fletcher.

The Citizens went ahead with 76 minutes gone when Williams steered his effort into goal after Sam Barnes headed a Jake Phillips corner back across goal.

Jones then doubled Bangor’s lead four minutes from the end when he slotted home from 15 yards after good work by Williams.

Callum Humphries was Bangor’s man of the match, while goalkeeper Gruff Evans kept a clean sheet.

Bangor controlled most of the action with Yalany Baio and Taylor-Fletcher at the heart of their passing moves.

With 20 minutes left City sent on Jones for Robbie Parry, running the channels and making life difficult for defenders.

The Citizens confirmed that an offer has been made, but both Stephens and Darlington were in the squad for their 2-0 win at Buckley Town.

Mosta have former Bangor director of football Stephen Vaughan on their coaching staff.

Manager of the month Neil Gibson’s Prestatyn inflicted a first home defeat of the season on Airbus Broughton.

They led 1-0 at the break thanks to an Ian Griffiths goal on 35 minutes, while Kristian Platt equalised for Airbus 10 minutes into the second half.

Porthmadog closed the gap on Airbus with a 4-2 home win against Penrhyncoch. Julian Williams opened the scoring for Port after 21 minutes only for Sion James goal to level the scores before the interval.

Goals for Ifan Emley and Gruff Williams saw Porth take control in the second half before, two minutes from time, a Jon Evans penalty gave Penrhyn hope of securing a point.

Shaun Cavanagh secured victory for Porthmadog with their fourth goal during injury time.

After a goalless first half at Ruthin Town, where Holywell Town were visitors, Llyr Morris fired the home side ahead five minutes into the second half.

Attacking midfield player Kyle Smith was man of the match for Flint Town United in their 4-1 win at bottom club Holyhead Hotspur. He scored Flint’s first goal with a powerful strike and helped set up two more.

Richie Foulkes converged a penalty after 38 minutes and then Brown ran onto a Brandon Burrows pass and despite being forced wide, scored from an angle.

Mel McGuiness netted for Holyhead soon after half-time, but that was the end of the scoring and Flint took all three points.

Ten-man Conwy Borough won 2-1 at Guilsfield thanks to goals from Corrig McGonigle and Sean McCaffrey, both scored in the last two minutes.

This @ConwyBoroughFC player's initiation song went pretty damn well to be fair to him. (Via @CoryW95) pic.twitter.com/R6442LA1J8

Conwy goalkeeper Ben Heald was sent off during the first half and Guilsfield took the lead.

“The game could scarcely have started any worse for us, 1-0 down and having our ‘keeper harshly sent off in the first 25 minutes,” said Conwy manager Warren Gibbs.

“We had to reshuffle our shape and concede that we would have less of the ball. Credit to centre half Gerwyn Jones for taking up the gloves following Ben’s red card.

“It is also credit to the lads and the character in the squad that after equalising on 88 minutes from a penalty converted by McGonigle, McCaffrey produced a moment of quality in stoppage time to grab the winner.”

The JD Welsh Cup fourth round tie between Bangor City and Caernarfon Town has been selected for live TV coverage by competition broadcast partners S4C.

The rivals will meet for the first time since 2015 on Saturday, January 26 at the VSM Bangor City Stadium (7.30pm).