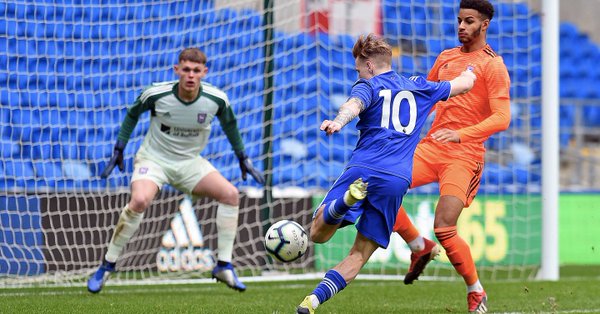 Armando Dobra, an 81st minute substitute, scored the only goal of the match for League leaders Ipswich and Cardiff’s former Wealdstone defender Ciaron Brown said: “Losing 1-0 was a harsh result.

“During the first half we were highly effective moving the ball, created some great opportunities and dominated.

“Ipswich came back into it near the end and they had that little bit of luck to win.”

The young Bluebirds included five players from their under-18 squad and they were Keenan Patten, Joel Bagan, Sion Spence, Sam Bowen and Daniel Griffiths.

“It was great to have under-18 players involved,” said Brown. “They performed superbly and were comfortable.

“All of those players involved were assets to the team and hopefully we can see them included more as the season progresses.”

Wootton’s low strike blocked and Quivi Fowler met the rebound, but was brought down. It looked a clear penalty, but nothing was given.

Town had only one shot on target in the first period and City continued to have the edge after the break. Fowler glanced a header narrowly wide before Brown’s goal-bound strike blocked from close range.

The closest City went came when Spence shot low drop 10 yards and beat the goalkeeper, but his effort was cleared off the line.

Ipswich had a chance of their own when substitute Idris El Mizouni powerfully goalwards from an inswinging corner and goalkeeper Brian Murphy, a former Ipswich player, saved.

Then came the bombshell moment when Dobra’s shot from close range was deflected into the net.

Cardiff’s next under-23 fixture is a trip to face Colchester United at Florence Park on Monday, January 21 (1pm).

That is the first of three successive away games for the Bluebirds, who travel to Bristol City on Monday, January 28 (1pom) and Watford on Friday, February 1 (3pm).

The next under-23 home match is against Coventry City at the Cardiff International Sports Stadium on Monday, February 11 (1pm).