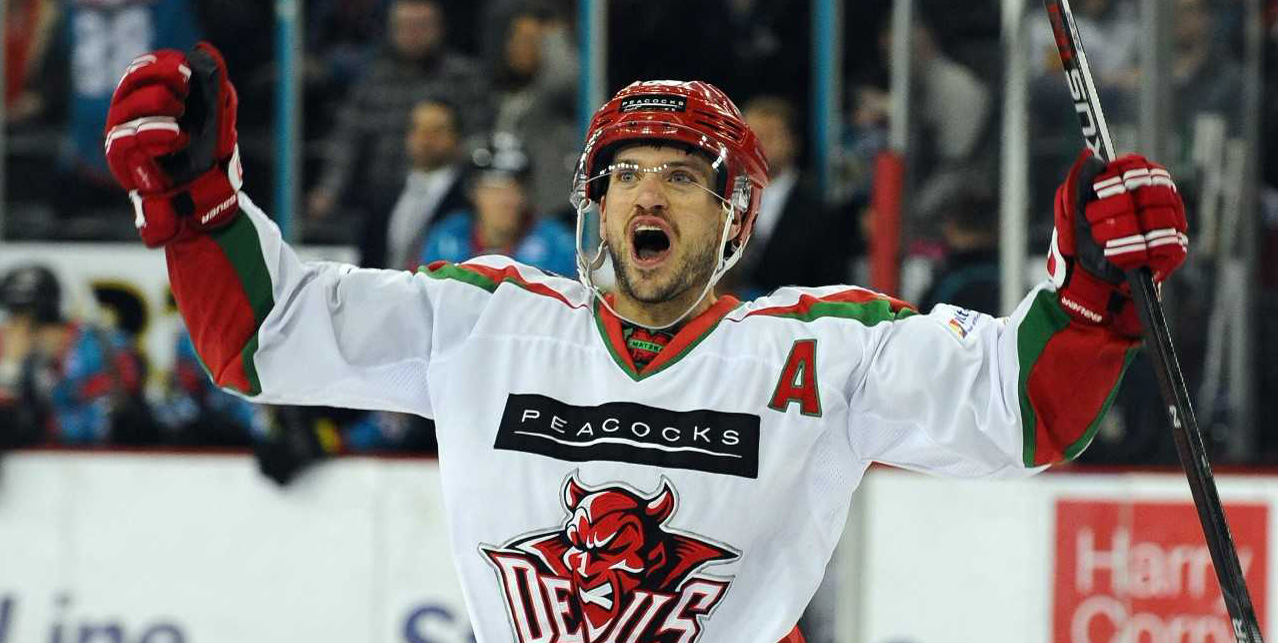 Dai Sport journalist Terry Phillips launches his new, weekly ice hockey column today – an off-beat look at the sport in Cardiff and beyond.

Strachan, a 55-year-old Canadian who played for Devils in 2000-01, has been appointed head coach for the rest of this season.

Panthers chairman Neil Black said: “Rich recruited a great roster of talent and we think we can still make a good run at the end of the season and remain in contention for all three titles.

“We believe this move gives us the best chance at success.

“We thank Rich for his efforts and wish him all the best in his future.”

Strachan had been assistant coach at Nottingham for nine season and Gui Lepine takes over those duties.

Panthers, who are third in Elite League, play three fixtures in three days this weekend on their Scottish triple header. They are at Dundee Stars on Friday, Glasgow Clan the next evening and Fife Flyers on Sunday.

There has also been drama at Sheffield Steelers where coach Tom Barrasso has released forwards Stefan Della Rovere and Justin Buzzeo plus former NHL goalie Matt Climie this week.

“It was a difficult day . . . . good young men lost their livelihood,” said Barraso.

“The remaining players and I bear responsibility for the decisions that occurred. We have let each other down.

“There was both sadness and a little anger from the players involved. I totally understand the frustration they feel.

“Recent results made a change inevitable. They are the victims of our failure as a group.”

Steelers will announce a new signing on Thursday, while they are certain to add other new signings.

They travel to MK Lightning own Saturday and the same teams meet again at the Fly DSA (Sheffield) Arena on Sunday.

Devils play both Panthers and Steelers away this month. Cardiff are in Sheffield on Wednesday, January 23 and go to Nottingham the following Saturday.

Cardiff Devils’ Josh Batch, who celebrated his 28th birthday this week, is closing in on a landmark appearance.

The 6ft 4ins Batch is in his eighth season with Cardiff and has played 497 games for the club.

He has been in outstanding form for Devils this season and has played a key role in their push for a third successive Elite League title.

Chelmsford-born Batch, aged 28, is on course to play his 500th Devils match against Sheffield Steelers away later this month.

David Longstaff has been hailed as British ice hockey’s greatest player of his generation – and was even been tagged the ‘Alan Shearer’ of his sport.

Lobby, as he is known among friends and team-mates, was the first player to smash the 100-cap mark for Great Britain.

Now he has a new love in his life – Newcastle United FC. Lobby’s son, 21-year-old Sean, has played Premier League and FA Cup football for the Magpies this season and netted his first goal this week.

It wasn’t too long ago that Sean was watching Newcastle matches from the stands at St James’ Park as a fan, saying: “My uncle is a massive Newcastle fan and had a season ticket for however many years.

“He was always the one who would go to games.

“I remember if I stayed at his house he’d stick the history of Newcastle United DVD on and we’d watch that. My family are all Newcastle fans.

“My dad was into ice hockey more than football, but my uncle and grandad took me to my first game against Mansfield Town in the FA Cup during 2006.”

Sean, a product of North Shields Athletic Juniors, is under contract until 2022, while dad Lobby is still playing ice hockey at the age of 44. He is player-coach of National League Whitley Warriors and has made 24 appearances so far this season.

His playing career stretches back almost three decades and the Whitley Bay-born winger won every domestic honour on offer playing for Sheffield Steelers and Newcastle Vipers.

Sean spent a lot of his youth watching Vipers during a bygone era in which they won the Elite League play-offs with his dad one of their stars of the show, with Longstaff’s father writing himself into the game’s folklore by scoring the winner in the 2006 final against Sheffield Steelers.

He had won the 2001 Grand Slam with Steelers and was voted Superleague Player of the Year.

Now Lobby is feeling home in Whitley Bay, saying: “I came back because Warriors have always held a place in my heart and if I wanted to stay in the sport, which I do, then coaching was the automatic next step.”

Longstaff senior combining and coaching ice hockey with his love for Newcastle United, supporting his son in any way possible.

“My brother and I would be at Newcastle Vipers training every day when dad was playing.” says Sean.

“Being around a team from a young age helped me.

“I am grateful to be in a big dressing room now, but I know how to deal with it because of that background.

“They are different sports, but I have been around in different situations.

“You know when to keep your mouth shut and when to have your say.”

Sean comes from a sporting family. His parents played netball and ice hockey at high levels, while his uncle is Alan Thompson who played for Newcastle, Celtic, Aston Villa and England in a glittering top-level football career.

“It’s important to have that behind you,” said Sean. “My dad has been there through his life on the ice hockey circuit.

“My mam was a netball player and they are so supportive. They have been there through the ups and downs.

“There’s also Thommo (Alan Thompson), who offers advice so I am in a pretty privileged position to have that many sports people around me who have been there and done it.

“Any kid from Newcastle dreams of playing for the black-and-whites. Right now I am living the dream.”