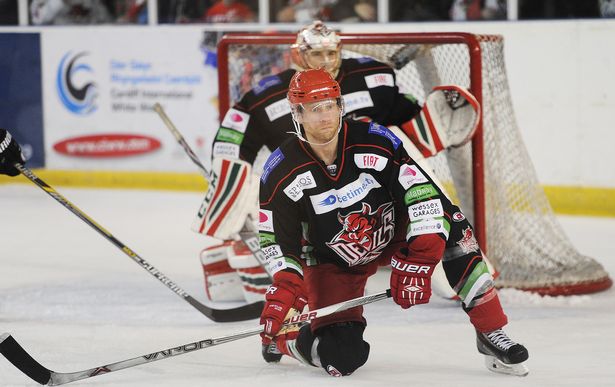 Mark Smith, one of the most consistently effective defencemen in Cardiff Devils history, is focused on a play-offs mission.

Edmonton-born Smith is Cardiff Fire’s head coach and they have launched a bold bid to finish among the top four clubs in National League South.

Fire have a big weekend at the Viola Arena, playing back-to-back home matches against Guildford Phoenix this evening (Saturday) and Oxford City Stars on Sunday.

Captain Phil Manny, another former Devil, and his players are upbeat after earning a 4-3 win at Peterborough Phantoms last weekend despite only having 13 skaters available. Teenager Morgan Evans netter the winner.

“That was massive,” says Smith. “We rolled two lines, five D and came away with a gritty, greasy road victory. James Whiting was outstanding in goal.

“Now we go into crucial home fixtures against Guildford and Oxford.

“Thankfully, we have a full team for these matches. The aim is to kick on and enhance our play-off hopes.”

Cardiff Devils are away on Saturday and Sunday this weekend – at Nottingham Panthers and Fife Flyers – and Fire would love fans of the Elite League leaders to check out their NIHL team.

Fire play a fast, aggressive, physical style, while they have plenty of skill thanks to players like Jordan Powell, Josh Haslam, Tamas Elias, Jackson Price and goalscorer Ricky Deacon.

Smith was appointed head coach this season and says: “We have a great group of guys here and I am excited by the prospect of what we are trying to achieve.

“There is a lot of work ahead, but we relish the challenge.”

Smith, aged 35, is a former Devils, Edinburgh Capitals and Coventry Blaze defenceman who played alongside brother Kenton for Cardiff.

During his early playing days, Mark was voted MVP at the 2003 Alberta Junior League All-Star game and, as a freshman, the Criminal Justice Major was top scoring D-man for University of Alaska Anchorage.

He played for Charlotte Checkers and Rocky Mountain Rage before coming to Elite League where he started with Edinburgh and then came to South Wales, spending five seasons playing for Devils.

Mark was never a man for fancy plays, but he was among the best defensive players in Elite hockey and a dream team-mate – rock solid and was right up there with Tyler Michell and Jake Morissette when it came to throwing his body in the way of pucks hurtling towards the net.

“Blocking shots didn’t feel too good if the puck hit you in a spot with no padding,” he said. “ I had a couple of injuries like broken fingers, but injuries are going to happen.”

He has settled in Cardiff, earning his MBA degree at Cardiff University where he studied alongside team-mates Scott Matzka, Stuart MacRae and Jon Pelle and played in the Devils team who set a World record of 21 consecutive wins.

Both of Fire’s fixtures are at the Viola Arena in Cardiff Bay. The match against Guildford will face-off at 6.30pm, while Sunday’s  clash with Oxford starts at 6pm.