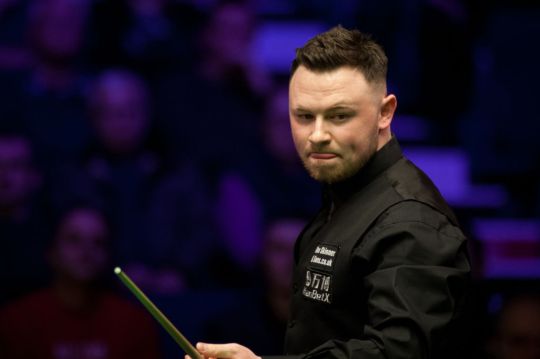 Duane Jones from Mountain Ash is through to the ManBetX Welsh Open third round. Pic: Getty Images.

Jones, from Mountain Ash, won 4-2 and said: “At the German Masters I reached the semi-finals and was practising a lot between matches.

“By the semi-final I felt burned out. I practised in the lead-up to the Welsh Open, but I have done virtually nothing during the tournament.

“That has helped me stay fresh.”

Jones, who plays out of the Celtic Club in Pontypridd, faced a huge test against Trump at the Motorpoint Arena in Cardiff.

World number four Trump arrived in South Wales after winning the World Grand Prix in Cheltenham, a triumph which came soon after being crowned Masters and Northern Ireland Open champion.

The 29-year-old Trump was as short as 1/9 to beat Jones with tournament sponsors Coral, but the Welshman opened in style.

He swept into a 3-0 lead, looked to be struggling when Trump won the next two games and then Jones clinched his 4-2 victory.

“I played okay, but thought I’d blown it at one stage,” said Jones. “I know Judd has done well in the last few tournaments and hoped he was shattered.

“I was telling myself to stay patient. I was gutted to lose the fourth game after being in a winning position, but told myself ‘I’m still 3-1 up’.

“I love playing in front of a home crowd. It’s special with friends and family coming to watch. I lost to Judd in the first round this season, but it feels good to progress into the third round.

“I held myself together well. Judd and I are around the same age and through amateurs plus early professional tournaments he was the governor.

“I’m over the moon with the win. I just tried to stay in the moment and enjoy it.”

In three successive frames, Jones left Trump needing a snooker to stay in contention and three times the Englishman did exactly that.

Twice Jones still came out on top in frames, but after the third snooker it was Trump who prevailed.

But this was the day World number 72 Jones grabbed a sensational win. Trump faded under the pressure of top quality cuing by the man from Mountain Ash and was well below his best.

Jones made three breaks of 60-plus, while Trump failed to score a half century.

The reward for Jones is a third round match against Robbie Williams.

Ronnie O’Sullivan moved into the third round, but wasted another century break by playing a shot too early.

He did it against Sanderson Lam in the first round, potting the pink to take a break to 101 and then went for his next red before the referee had time to replace the colour.

That meant his pink pot did not count and the break ended on 95.

In the second round O’Sullivan played teenage Chinese player Yuan Sijun. The Rocket was fortunate at one stage when he took a shot just as referee Rob Spencer’s and moved away after replacing a ball on the table and he went on to score 120.

That was the 993rd century break in his career, but soon after he moved too quickly again and wasted another 100-plus. Spencer called the fault and O’Sullivan’s missed another chance of a century.

Overall, O’Sullivan was dominant in a 4-2 win. There were stutters, but he finished on a 99 break, blasting his final shot on the blue far too quickly when a more careful aim would surly have taken him past the 100 mark.

He should now be on 996 centuries, but three wasted opportunities leave him on 993.

“It’s nice to know you can score 100s and sometimes you don’t have to prove it,” said O’Sullivan.

Cwmbran’s World number 87 Jak Jones has moved into the third round thanks to wins against fellow Welshman Matthew Stevens (4-2) and England’s Peter Lines (4-3).

The 27-year-old surged into a 2-0 lead before Fu hit back to level the scores following a break of 87 in the fourth.

Cheltenham-born Lisowski produced a clearance of 140 to lead 3-2 up before Fu hit back with a 71 to tie things up.

Lisowski clinched victory and a third round place with a 122 break.