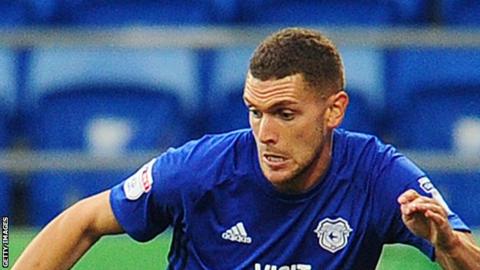 Wrexham-born Dan Griffiths, an 18-year-old former Liverpool trainee, scored Cardiff City’s winner in their under-23 match against Hull City away.

Griffiths, who joined the Bluebirds last summer, has scored 23 goals in 20 under-18 fixtures and made his mark against Hull at the Roy West Centre immediately before half-time.

He struck when Joel Bagan went for goal with a powerful drive the home team failed to clear from a corner. Griffiths instinctively directed towards goal to make it 1-0 in the Professional Development Under-23 League and extended Cardiff’s unbeaten run to four matches.

Both teams made six changes to their starting line-up from the previous match.

Hull started brightly and went close Ahmed Salam intercepted a wayward pass just outside the penalty area, but his shot was saved by ‘keeper Burwood.

Cardiff responded with a close free-kick attempt shortly before the half hour mark. Defender Bagan took the set-piece, but his curled drive from 20 yards flew narrowly wide of the far left post.

Griffiths goal put the young Bluebirds on top at half-time and the visitors pressed forward in the second half.

O’Keefe picked out the on-rushing Griffiths, who could only fire wide from close range.

Hull were desperate to salvage at least a point nine matches without a win and in the last 10 minutes two penalties were awarded.

The Bluebirds had a spot-kick after defender Lupano brought down Aaron Bolger and the Irishman jumped up to take the penalty. Bolger’s initial shot was saved by ‘keeper Harvey Cartwright with his rebound effort going wide.

Less than five minutes later Burwood brought down substitute Tom Powell. However, the young shot-stopper made up for his mistake with a brilliant save down his right to keep the Bluebirds ahead.

Cardiff saw out the final minutes to earn a third win in their last four matches.

Saturday 6 v Birmingham City (away, at the Autotech Stadium, Noon)