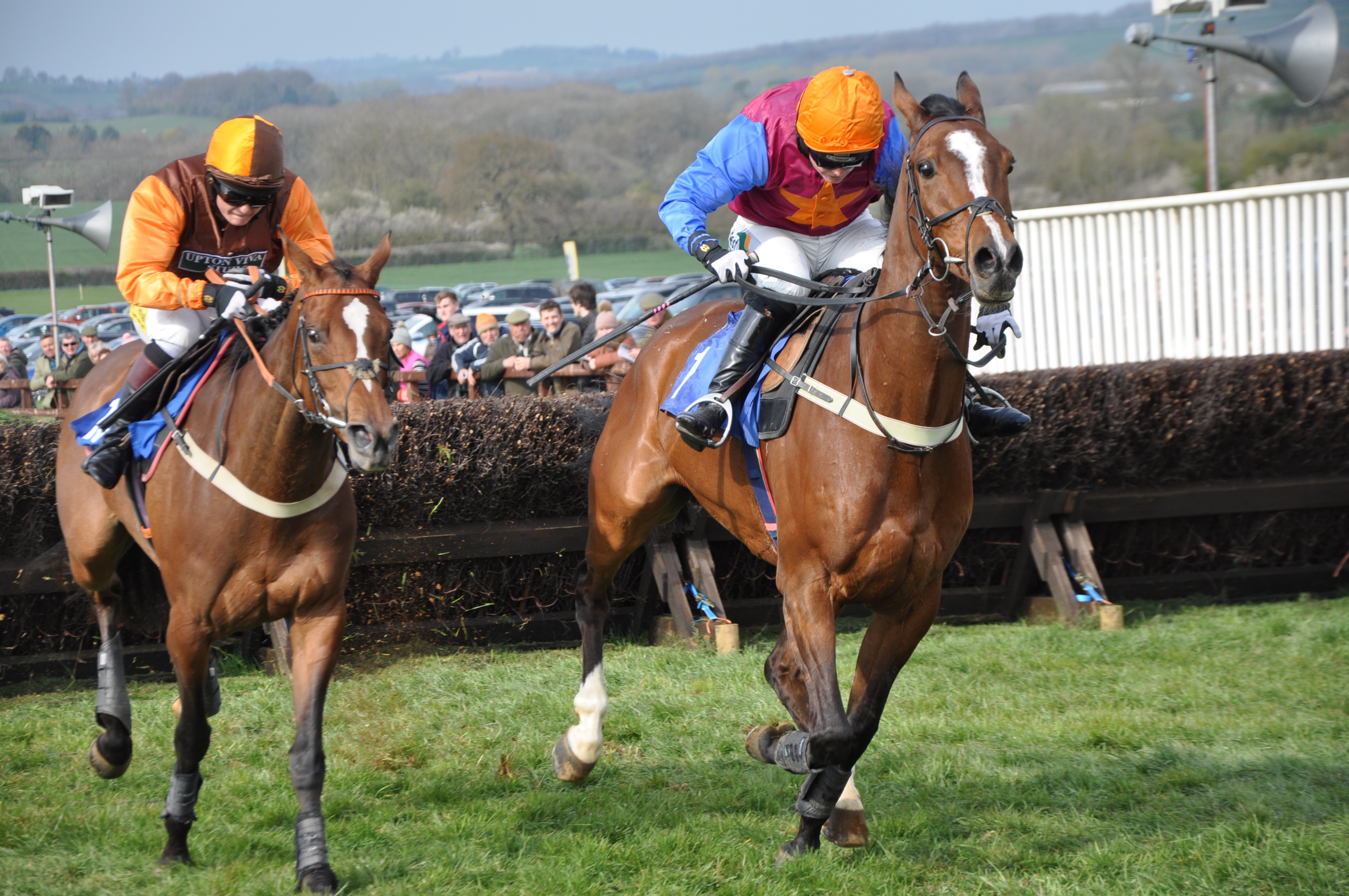 Gina Andrews (rght) drives for the line on An Scairp as The Jaffna Queen (Alice Stevens) challenges.

Point-To-Point racing returns to Redlands Farm, Bonvilston near Cowbridge, on Easter Saturday for the first time since 2012 when the Glamorgan Hunt hold their popular annual steeplechases (writes Brian Lee).

With excellent viewing facilities and a six race card including a £1,000 feature race an exciting afternoon’s racing is promised.

Glamorgan Hunt entry is £10 for adults with children under-16 free.

With roadworks in the area, racegoers should allow themselves more travelling time (first race 2pm).

The five-time Skinner’s ladies’ champion – soon to take the title for a sixth time – rode her 41st winner of the season on King Of The Clothe in the final race of the day at Edgcote.

The victory meant she had achieved the highest score by a woman rider in a point-to-point season, lowering the record set by Polly Curling in 1995.

After weighing in Andrews emerged from the changing tent for the post-race presentation and was met with a wall of water, hurled from buckets by friends and riding colleagues.

Andrews rode four winners at the weekend, scoring a double at Bitterley on Saturday before heading to Edgcote where she equalled Curling’s score on the Hannah Mahon-trained An Scairp in the restricted race.

Local rider Jack Tudor, who is making a bold bid for the national novice riders’ championship, had a hat-trick at the Llangeinor Hunt Point-To-Point Steeplechases, held at Dunraven Stud, Llanmihangel Farm, Pyle.

The treble was initiated when 16-year-old Jack, riding David Brace’s nine-year-old brown gelding Robin Des People in the novice rider’s race finished alone after solitary rival the odds-on Sir Du Bearn broke a leg and had to be put down.

Win number two came in the Dunraven Bowl Men’s Open race when Pink Eyed Pedro, the even money favourite, went ahead of North George at the penultimate fence to win by three lengths.

Jack’s third winner was in the restricted when the eight-year-old grey mare Welliemix took it up at the penultimate fence to win by two lengths from Design Plan.

Welliemix, who had lost her maiden certificate at the corresponding meeting last year, clocked a time which was 35 seconds faster than she had clocked on that occasion when ridden by Welsh champion Bradley Gibbs.

This time Gibbs only rode one winner, but it was an important one as it was his 150th between-the-flags. He has also ridden eight hunter-chase winners.

He earned the landmark win in the three-horse farmers’ race when riding the odds-on Bracho for David Brace OBE, making almost every yard of the running to win by eight lengths from Jack Tudor’s mount Desert Roe.

Another horse that made nearly all was Jason Warner’s five-year-old chestnut gelding  French Piece who, under Cowbridge jockey Byron Moorcroft, won the open maiden over two-and-a-half miles by two lengths from Miss Rhian Howells’ Caveat Emptor, partnered by Wayne Maskill.

Moorcroft, riding the blinkered and best turned out eight-year-old bay gelding Holy Water for Natasha Woodington and trainer  Luke Price, was a 10 lengths winner of the open maiden race.

Brace made it a training four-timer when his prolific 12-year-old William Money finished a distance ahead of Ruperra Tom in the three-horse ladies’ open race.

William Money was partnered by Pembrokeshire’s Jodie Hughes, who said: “I didn’t realise how far we were in front. We both enjoyed the race and he jumped cleverly.”