Spain's Edmon Lopez, a 22-year-old from Barcelona, has been left flying the Welsh flag at the Rhiwbina PSA Welsh Open Squash quarter-finals.

Lopez, ranked 54 in the…"> Spain's Edmon Lopez, a 22-year-old from Barcelona, has been left flying the Welsh flag at the Rhiwbina PSA Welsh Open Squash quarter-finals. 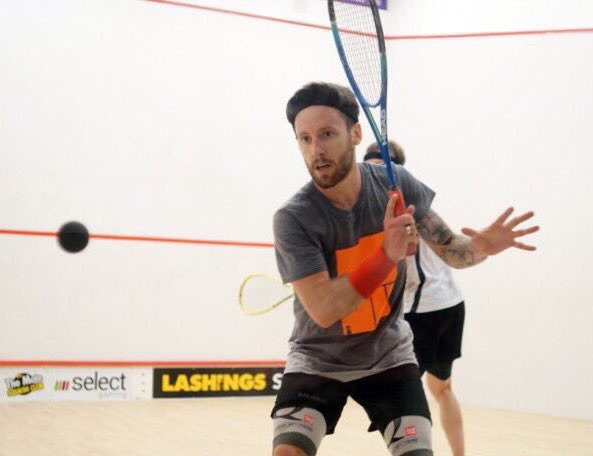 Peter Creed in action during the Rhiwbina Welsh Open.

Spain’s Edmon Lopez, a 22-year-old from Barcelona, has been left flying the Welsh flag at the Rhiwbina PSA Welsh Open Squash quarter-finals.

Lopez, ranked 54 in the World, played Premier League Squash for Welsh Wizards in Cardiff and has spent a lot of time in the city.

He played fellow Wizard Emyr Evans in the quarter-finals of Rhiwbina’s $11,000 Challenger 10 tournament.

There were 11 countries represented through the first round draw and they were England, Spain, France, Finland, Croatia, Spain, Italy, India, Pakistan, Germany and Wales.

Home interest was ended in the quarter-finals as top seeds Richie Fallows and Lopez advanced to the semi-finals, where they will face Abhay Singh and Benjamin Aubert.

Yuri had a great run up to this point and was in all the rallies, but Richie’s class told and ran out a convincing winner to progress through to the semi-finals. Can anyone stop him?

The only shock of the night saw Abhay earn victory in this match.

A very under the weather Peter could not maintain his usual massive high standards of tough rallies and amazing retrieving and Abhay was too steady in his length and shot play. The wait sadly goes on for Peter to win his home town event, but Abhay will be buoyed by his place in the semi-final where he will need to perform to his best to take on a dominant Fallows.

The young Welshman’s great run came to end tonight but not before he put in a great performance to fall just short against a very talented opponent. Benjamin was so fast and accurate around the court and this ultimately told in the end. Owain has had 2 very tough encounters to get to the quarter finals and congratulations to him on his event. Benjamin moves forward to contest a semi-final place.

It was nip and tuck for the first two games, but Edmon has an unrelenting style and this took him on to meet Aubert in the next round.

Fantastic matches at Rhiwbina with a good crowd, appreciative of some great squash. Can’t wait for tomorrow night !!