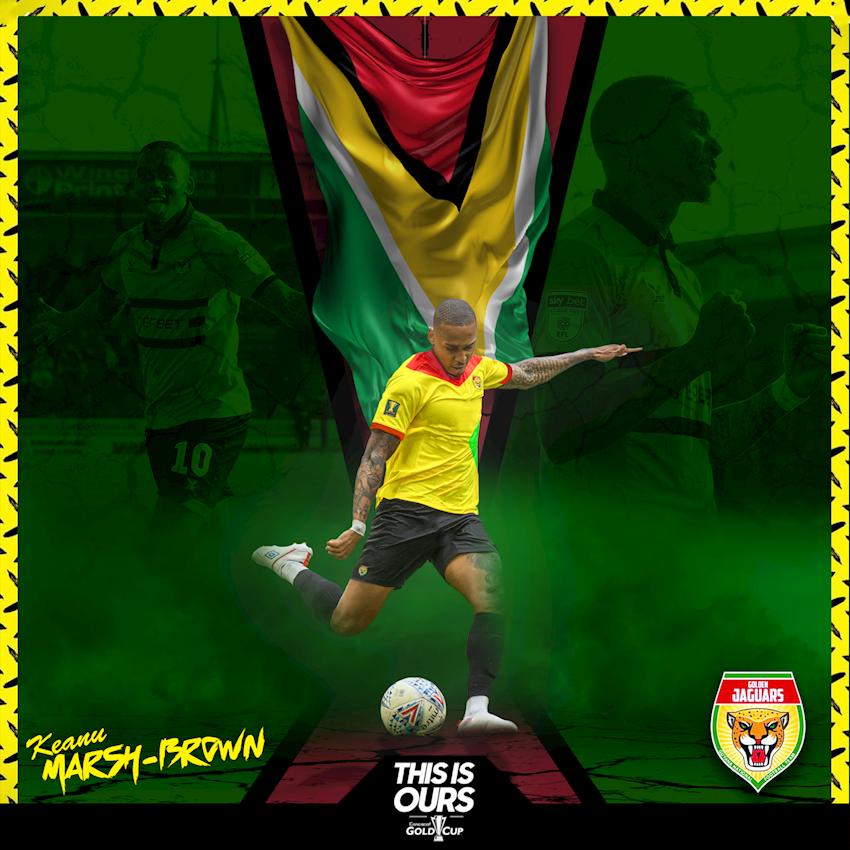 Guyana, nicknamed Golden Jaguars, have been drawn in a group alongside the United States, Trinidad & Tobago plus Panama with all those matches being played in America.

“It’s and honour to be called up and we are looking to carry on from where we left off with the win against Belize,” says Marsh-Brown, who assisted on the winning goal which clinched their place in the finals.

“We must take that momentum into the tournament.”

Former Derby County defender Michael Johnson is head coach of a Guyana team who start with a match against holders USA on Wednesday, June 19.

For @GFF_Inc_ to be involved in last nights @GoldCup draw was humbling. To play against the hosts @USMNT is a mouthwatering draw. We look forward to seeing you all in June pic.twitter.com/ZPeAkvz9zS

They will then face Panama on Saturday, June 22 and then Trinidad on Wednesday, June 26.

Marsh-Brown remains under contract with League Two Newport next season, while manager Michael Flynn has signed goalkeeper Tom King on a two-year contract.

“I am thrilled to welcome Tom,” said Flynn.

“He has a good amount of experience at this level and is at an age where he will continue to improve.

“It should provide us with a healthy amount of competition between the sticks. Tom reminds me of Joe Day when he first came to the club, a highly talented goalkeeper.”

Former Rushden and Peterborough goalkeeper Day, a 26-year-old who has made more than 200 appearances for County, is out of contract at Rodney Parade. He has, though, been offered a new deal.

The arrival of King with Nick Townsend, still under contract, a second goalkeeper seems to suggest Day could be moving on.

He has been linked with Bristol Rovers, who have to sign two goalkeepers this summer.

The 26-year-old is part of County folklore after his last minute goal against Notts County completed the Great Escape from Football League relegation two seasons ago.

The Irishman captained County for much of 2018-19 and says: “It was a shame that we did not clinch promotion at Wembley in the play-off final, but I am already feeling confident for 2019-20.

“Bring on the new season.”

Josh Sheehan has signed a two-year contract extension at Newport. His new deal runs until the end of 2020-21.

The 24-year-old attacking midfield player said: “Ever since I first came on loan from Swansea as a teenager I have enjoyed playing my football here.

“It was such a shame to end a memorable season with a play-off final defeat, but I’m excited to remain a part of the squad and hopefully, I can play my part in another successful season.

“The fans have been brilliant with me ever since I have joined.”

After three years with County, Dan Butler is leaving Rodney Parade to join Peterborough United when his Newport contract ends this month.

Dan Butler has opted not to sign a contract extension with the Exiles and will play for Posh in League One next season.

“Dan is one of or if not the best professional I have worked with and I would have loved to have kept him,” said Flynn.

“But he deserves this move and goes with my full blessing.”