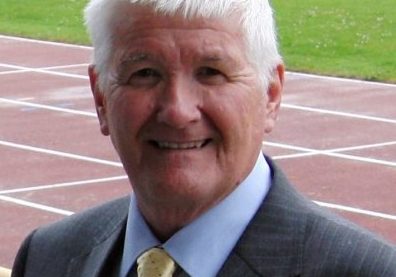 Welshman Dave Cole celebrates almost exactly 30 years with his home town club this month. Cole has experienced the heights of football ecstasy with Barry Town and, when he thought the club was going out of existence, the depths of despair. This evening, at Cardiff International Sports Campus, he will proudly watch Barry return to European action for the first time in 16 years, as he tells Terry Phillips.

Barry Island-born Dave Cole must feel he has been to hell and back over the last three decades. And right now he is in a good place.

This evening’s Europa League home tie against Cliftonville is a massive occasion for the fan-owned Vale of Glamorgan club.

There was a time, when Neil O’Halloran and his family owned the club, when passionate fans believed Barry Town would be League of Wales champions for years and years.

Former Cardiff City player O’Halloran, who scored a hat-trick on his Bluebirds debut, was the owner who led Barry to remarkable success in Welsh football and they earned respect in European competition.

Another former club owner, Stuart Lovering, had plans to build a 15,000 capacity stadium in the Barry Docks area at one stage, but later withdrew the club from Welsh League football with two fixtures left in 2013 and Cole says: “We had matches against Ton Pentre, home and away, to finish our season.

“On a Tuesday evening Stuart rang the League secretary and said ‘I am pulling Barry Town out of the competition’. That was it. They had to accept it because he was club owner.

“Technically we did not exist any more as a football club.”

Barry, though, have battled back over the last six years and there will be huge pride when their players run out to play Cliftonville.

“It’s a great story,” says Cole. “We’ve had six years of ups, but I’m sure there will be some downs in the future because it wouldn’t be Barry Town without that.

“We don’t owe anybody money. Barry Town United are debt free. We live within our means.

“The social club at Jenner Park is a Godsend. Part of that was derelict for four years or so and we even moved out to the Tynewydd Inn.

“Then we started serving teas and coffees at our ground before managing to secure a licence and started selling drinks in cans. Then the beer pumps came in and the social club is thriving again.”

Many people have played their part in the Barry Town story – far too many to mention them all – but among those who have played key roles are Cole himself, manager Gavin Chesterfield and his wife Hannah plus main club sponsors Mark Barrett of RIM Motors and Lyndon Smith from LDS Motor Factors.

“Our sponsors have been hugely, hugely supportive,” says Cole. “Without them we would not be here.”

Another key contributor was former Cardiff City director and London-based barrister Jonathan Crystal at a time when Barry had been refused a place in Welsh League football and were fearful of being pushed into recreation leagues.

Crystal was crucial to Barry’s survival when he agreed to head up legal proceedings between the football club and the Football Association of Wales.

“Gavin Chesterfield and I went to see Jonathan in his London chambers armed with hundred of documents about the football club,” says Cole.

“He ignored those and just said ‘tell me the story’.

“Jonathan told us he had an affinity with South Wales and agreed to take the case.”

He was a Cardiff City director at one time, while his family had left Hungary following an uprising in 1956 and settled in the Welsh valleys.

Crystal said he liked taking on authority, but Cole had to tell him ‘We don’t have any money.’

“He just said pay for my train fare and hotel bills and I’ll do it for nothing,” says Cole.”He was probably on a massive daily fee, but was willing to back us.

“He told the FAW we were going to court and they decided to fight the case. Their QC was appointed and Jonathan told us ‘their guy is good, the second best sports barristers in the country. Luckily I am the best!

“The club sponsors, Mark and Lyndon, funded the fees for Jonathan’s travel and accommodation.

“The judge in Cardiff found in our favour and ordered the FAW to put us in Welsh League Division Three. All but two of our players from the previous season in Division One stayed with us.

“They did not sign for anybody else while they waited for outcome of court case and stuck with Barry Town.

“We did not even have a kit because we had not existed as a club until the court case.

“We had a licence to play at Jenner Park and there was big support from Cllr Glynn John and the whole council.”

Cole spent 23 years in the Royal Army Pay Corps, serving in Aden, Libya, America, Germany and Hong Kong, and when he came out of the services in 1998 he spotted a local paper advert saying their was a Barry Town Supporters Club annual meeting.

“I went along and the secretary was stepping down,” he says. “Nobody else wanted to do it, up went my hand and here I am.”

Cole worked closely with several Barry owners and says: “We had most of the club’s success with Neil O’Halloran, who was a lovely, lovely guy and died far too young.

“His wife, Paula, took over, but it was getting too much for her. A gentleman called Kevin Green, a former Scarborough director, bought the club and he was full of good intentions.

“We didn’t realise he didn’t have the financial backing to sustain the club. We carried on as a full-time professional club for two years, won the League of Wales, Welsh Cup and had a couple of forays into Europe.

“But we went from being sustainable to £900,000 in debt and went into administration during August 2003.

“Stuart Lovering bought Barry Town in the December and at first people were grateful. He had saved the club. If he had not come in at the time we would have ceased to exist.

“For six months it was great and supporters were getting behind the team. Then he started coming up with plans which were far beyond a club of this size.

“Then, Wham! It all fell apart.

“Stuart put the club up for sale, but the price kept changing. Supporters were asking ‘When will it end.’

“Then came the Tuesday phone call when he withdrew Barry from the Welsh League and, at that stage, we technically no longer existed as a football club.

“We were in oblivion. We had a company called Barry Town Supporters Committee which had been funding all football for six years, but Stuart was the owner.”

Not too long ago the club had two teams – senior and youth – with around 40 players. Today there are 600 male, female and pan-disability players, aged from five-years-old upwards, within the organisation and this week another team – Barry Vets – was launched.

“Gavin Chesterfield must take a huge amount of credit for where we are now,” says Cole. “We are sustainable, we are all pretty level-headed and don’t get above our station.

“I love it right now. Hannah Chesterfield and I, along with Gavin, have taken a bit of a battering over the last four weeks. It has been a hugely stressful time making sure everything was in place for the home game against Cliftonville, but it’s been worth it.”

How times have changed since Barry Town and the FAW went head-to-head in court.

Cole is an FAW councillor and says: “Without the staff at the Football Association Of Wales over the last few weeks we would not be playing.

“They are managing the stadium for us and taking care of delegates. They want us to concentrate on the football because they want the club to focus on winning.

“There is a lot of positivity and I sent an e-mail to chief executive Jonathan Ford asking him to pass on our thanks to the staff.”

Manager Chesterfield arrived at the club six years before their court battle and has helped the club achieve what looked an impossible dream.

“I am a football romantic,” he says. “Twelve of those lads stuck by us when we didn’t even have a shirt to play in.

“To complete that full circle, to take our place in the Welsh Premier League and qualify for Europe is just unbelievable.”

1892 Football team named Barry and Cadoxton District formed in the area. During the early years, this side endured many upheavals, playing on five different grounds under various identities, including Barry Unionist Athletic, Barry United Athletic and Barry District.

1912 Club secured land owned by the Jenner family and the people of the town came together to build Jenner Park, ready for the first match of 1912–13.

1949 Jenner Park became one of the first grounds in the country to introduce floodlights, with Newport County, Swansea City and Cardiff City all visiting to showcase the facilities. 1955 Barry defeated Chester City 4–3 at Ninian Park to win the Welsh Cup for the first time.

1992 League of Wales (now Welsh Premier League) formed and Barry told they would no longer be able to compete in the English pyramid.  while based on Welsh soil.

1993 Neil O’Halloran brought Barry back to Wales and they were accepted into Welsh League Division One.

1995 Barry opted to become the league’s first full-time professional club and won their first LoW championship in 1995–96. That season, though, was marred by the untimely deaths of club chairman O’ Halloran and midfield player Matthew Holtham.

1996 Became the first club from Wales to progress beyond the opening round of a European competition, winning Latvia against Dinaburg and beating Hungarian team Budapest Vasutas after a second leg penalty shootout.

Barry went on to clinch a treble of League of Wales championship, Welsh League Cup and Welsh Cup. The title was earned with a record 105 points and a goal difference of more than 100-plus. Barry went 51 matches without tasting a single league defeat.

1999 Barry become the first League of Wales team to win the FAW Premier Cup, winning 2–1 win against Wrexham at the Racecourse in North Wales.

2005 District valuer decided club should pay £42,000 in rent and rates each season for the remainder Jenner Park lease. Lovering opted to move the team to the White Tips Stadium in Treforest from January 2005 to May 2006. During the absence, a number of fans formed breakaway Barry FC.

2008 Barry earned promotion to the second tier under Chesterfield.

2013 Lovering, still the club owner, withdrew the senior team from Welsh League, against the will of the BTSC, players and supporters who were ready, willing and able to play the remaining two league fixtures (both against Ton Pentre).

FAW Council meeting in Betws-y-Coed determined team would have to play ‘grass roots football. There seemed hope for beleaguered Barry when a second meeting was arranged to in Caersws to hear new evidence, but FAW Councillors voted against discussing Barry’s future, sensationally ending the meeting in no more than five minutes.

Ultimately, a High Court judge in Cardiff ruled in Barry’s favour, stating that the FAW Council had acted unlawfully in denying them their licence to play Welsh League football.

2016-17 Barry finished runners-up to Cardiff Met and missed out on promotion, but went up the following season.

2018-19 Barry finished third in WPL behind champions TNS and Connah’s Quay, a remarkable achievement which led to Europa League qualification.