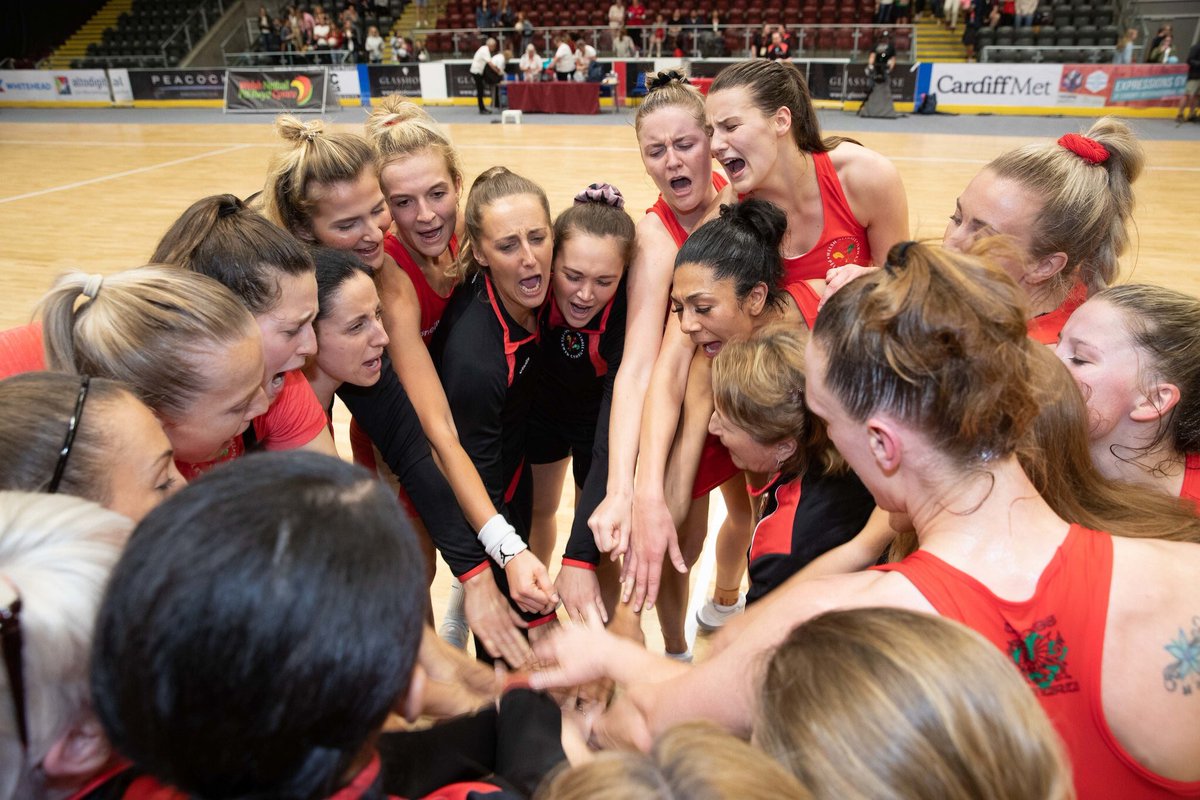 The Welsh players gather before their win against Grenada.

St Asaph-born Suzy Drane, the current golden girl of Welsh netball, is 101 not out.

Drane, a full-time lecturer at Cardiff Metropolitan University, has powered past the century landmark in senior international appearances for Wales – and is closing in on record holder Helen Weston.

Wales completed their summer Test series in Cardiff with four successive victories, beating Malawi 52-47, Trinidad and Tobago 72-64 plus Grenada 72-53 and 81-53.

That’s a whopping 277 goals and Drane, who made her international debut in 2005 against Jamaica, played a major role in those wins.

Only two players have made more than 100 senior matches for Wales – Cwmbran’s Weston, now retired, is on 111 and Drane, still a key player for her country and Celtic Dragons, is on 101.

The 32-year-old Drane has played in three World Cups and three Commonwealth Games.

The Wales team have been playing in a six-test summer series with notable wins over Malawi and Trinidad & Tobago – who both have higher world rankings.

“The game has changed over the 15 years that I’ve been involved and netball is at a place now where it is really starting to move forward and gain some pace,” said Drane.

Her family moved from St Asaph to the Chester area in 1997 and they still live in the village of Waverton.

Former Christleton High School pupil and Chester Netball Club player Drane became a lecturer at Cardiff Met following the completion of a BSc and MSc in Sport Development and Physical Activity and Health at the university.

The Welsh squad played six matches in seven days while hosting the Summer Test series with fixtures played at the Viola Arena in Cardiff Bay and Sport Wales National Centre.

Wales ended the Summer series with a thumping 81-53 win against Grenada at SWNC.

In the second clash with Grenada, Wales led 20-14 after the first quarter and turned the screw to finish the half with a 44-23 advantage.

That was the cue for Brooke Collett to go on and earn her first Wales cap.

Wales stretched away to lead 64-37and finished convincing winners.

Nantyglo netball ace Collett, who plays for Ystrad Mynach Netball Club, is a mid-court competitor and was one of six players to make their debut for Wales during the summer series.

“Brooke is a small, but dynamic goal-defence/wing-defence who loves to time her leads to take exciting intercepts,” says Wales coach Hoornweg.

Collett, who started playing the sport when she was an 11-year-old pupil at Blaen-y-cwm primary in Brynmawr, captained the Swansea University team before entering a career in finance.

The former Newbridge club player represented Wales under-19 at Netball Europe in Dublin during 2008 and has now stepped up to the senior squad.

The century landmark achieved by Drane made it a double celebration for Wales when it was announced that former Welsh international Liz Nicholl has been elected president of the International Netball Federation.

Nicholl is stepping down this summer from her role as UK Sport chief executive after eight years at the organisation. She will take over from Molly Rhone as INF president at the end of the Netball World Cup on July 21.