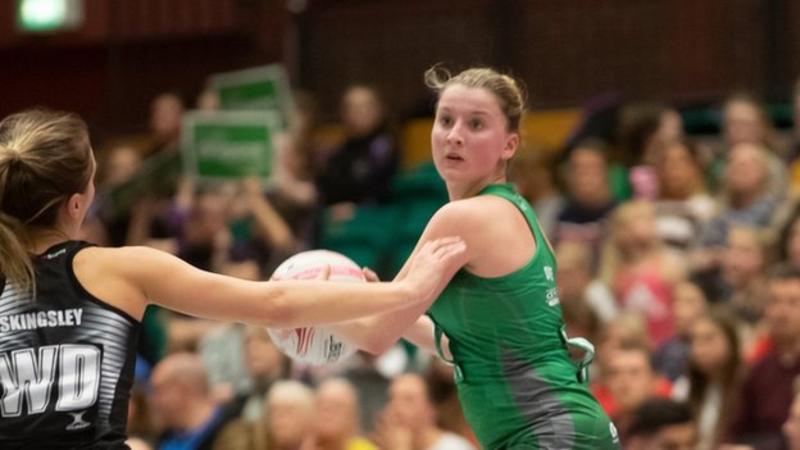 Bethan Dyke in the green dress of Celtic Dragons.

Bethan Dyke announced her return to full fitness by playing a full part in the Welsh Netball Summer Test Series.

Wales fought out six games in seven days, winning four, with the mid-court player standing tall at wing-attack or centre.

Former Cardiff Met University student Bethan, originally from Bridgend, was out injured for nine months, but was back in the green dress of Superleague club Celtic Dragons last season and returned to international action in the red of Wales.

The Test series featured Wales against South Africa (twice), Malawi plus Trinidad and Tobago at the Viola Arena in Cardiff Bay followed by Grenada (twice) at the Sport Wales National Centre.

Bethan was helped by family and friends plus Dragons’ team-mates and fans during her recovery from an anterior cruciate ligament injury sustained during the Commonwealth Games on the Gold Coast in Australia.

“I felt fully supported coming back gradually and the positivity of the team helped motivate me,” she says.

“Dragons have the most amazing supporters, who will wait up to an hour after the game to get photos and autographs.

“The main thing for me is knowing that the next generation are being inspired – they will be the ones coming through in years to come.”

Dyke played in all six Wales matches during the Summer Series, taking her total of international appearances to 43.

There were nine matches played by six countries over seven days with more than 1,000 goals scored.

It was a hugely successful series which announced Dyke firmly back on the international stage, having fully recovered from the ACL injury suffered during the Commonwealth Games in 2018.

“I can’t believe it’s been 15 months since my accident,” said Dyke during an interview at Sport Wales.

“It happened during a late-night game against Scotland.

“So surreal and devastating. Team Wales were fantastic and it all happened so quickly with tests and results. It was a horrendous time.”

Dyke’s family were out in Australia to watch her matches and were able to give close support as she came to terms with the setback.

“It took a day to help me switch my mindset and understand that I could still make a positive impact on the team – we all had a job to do out there,” she says.

Dyke was overwhelmed with the support, cards and well-wishes received from other countries, saying: “You don’t realise how many people care. That was the biggest takeaway for me – a reminder of the positive side of sport, especially team sport.

“It was six weeks before the swelling went down and I was able to do simple tasks that you take for granted, like learning to walk properly again.

“I set myself really small goals. When I was told recovery could take nine to 12 months, I needed to break that up into achievable weekly goals.”

“I had a really positive experience of physical education at school and it made me want to be a PE teacher,” said Bethan.

She stayed on at Cardiff Met to complete her Masters, before going to Millfield School and taking her teaching qualification.

The Dyke family are extremely sporty. Bethan and her younger sister, Chloe, were inspired to take up netball by watching their mother Helen train and play in local netball leagues.

Dad Richard played rugby for Bridgend Athletic, Pontypool, Bridgend and Tondu and, at the age of 47, he completed Tenby Iron Course of a 2.4-mile swim, 112-mile bike ride and 26 mile run marathon in 13 hours 46 minutes.

Both parents are members of local running and cycling clubs.

Bethan enjoyed a variety of activities including lifeguarding, trampolining, gymnastics and dance, but netball had the strongest pull.

She represented Wales Netball at under-17, under-19 and under-21 levels before winning her first senior cap aged 19 in 2014.

That year Bethan competed for Wales in the Commonwealth Games in Glasgow and then the World Cup.

Chloe captained Wales at under-17 level for two seasons, before earning under-19 and under-21 call-ups.

“My dad played a lot of rugby, Mum played quite a bit of netball and swam.,” says Bethan. “My sister and I watched a lot of sport even before we played it.

“I started playing netball in the school team in Year 4 or 5.

“I was really lucky because lots of my friends played netball and we went all the way through school playing together.”

Now Bethan is back to full fitness, playing for Wales and preparing for the new Vitality Netball Superleague season with Celtic Dragons.

“My injury was a reminder that things don’t always go to plan. No matter how much work you put in to get somewhere, things can change quickly.”

Wales disappointingly failed to qualify for the World Cup currently being played in Liverpool and are having to watch England, Scotland and Northern Ireland represent the UK.

There are, though, players from Celtic Dragons competing in the World Cup.

Despite Fiji’s consistent presence at the World Cup, this is Dee’s first taste of the competition. The 34-year-old goal defence, who can also play at wing-defence, helped Celtic Dragons reach their highest Vitality Netball Superleague finish in recent years last season.

Vibrant, athletic and accurate, goal-attack Kalifa McCollins captains Trinidad and Tobago. The 23-year-old has been outstanding for Dragons and was recently rewarded with a place in the league’s All-Star line-up.