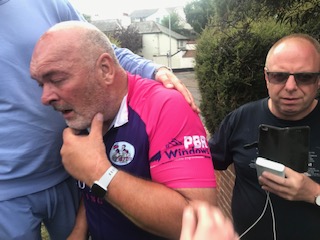 Former St Peter's rugby captain Paul Ring at the end of his arduous Cardiff to Exeter cycle ride with the Old Farts.

Paul Ring was captain of St Peter’s RFC when they caused the biggest shock in Welsh Cup history, but I doubt the euphoria he felt that day in 1993 could match his achievement for Old Farts Cycling Club.

Ring’s Rocks defeated Cardiff RFC 26 years ago – and losing coach Alex Evans gave a suitable impression of a whinging Aussie by having a dig at the referee and St Peter’s after the 16-14 result.

That was a huge team effort, while Ring’s latest sporting achievement – riding from Cardiff to Exeter in a day – was a lone effort with massive support from club-mates and supporters.

Ringo, nicknamed ‘Itch’ from his rugby days, was the last of 40 riders to complete the 140 mile ride after going off-course and covering an extra 30 miles! He had left Roath with the OF’s group at 5am – and rode to the finish line, shattered after battling for mile after mile, more than 15 hours later.

He showed remarkable resilience, heart and sheer determination to finish, arriving at the Stoke Arms, a pub where the OF’s gathered before riding the last downhill section of less than a mile to Exeter City FC.

Ring was cheered in by all other riders and supporters and burst into tears as he arrived.

I took his bike away, allowing him to accept the congratulations of OF’s at the Exeter pub.

“It was absolutely fantastic to finish, absolutely horrible at times along the way,” said Ring. “Yes, I was emotional. I had a few problems en route.

“I managed to reach my personal destination, which was Taunton, and then decided to go on and do the last 25 miles. I went the wrong way and added an extra 30 miles on top of the 140 we were meant to ride!

“My kids and family we there and I was over the moon to finish, although it was hard at times. I’m not sure how long I can keep riding these distances – I’m getting older and fatter.”

Ring is one of four former rugby players who had a drink together on New Year’s Day 2016 and came up with the idea of long-distance cycling.

“We decided to do it, but we weren’t thinking properly,” says Ring. “It kicked off from day one, but it wasn’t meant to be like this.

“The plan was to raise a couple of bob for good causes. Now, in four years, we have raised £100,000-plus and every penny goes to the charities we support.

“This grew from silly talk over a beer or two. When I woke up in the morning I realised it was on Facebook and we were committed.”

Ring has ridden three of the four annual rides – he was ruled out in 2018 by illness – and the group quest to raise money goes on.

The Farts have their Summer Ball in Cardiff Bay on Saturday, September 14 and Ring says: “That alone should raise £10,000 and our fundraising total will be some way past £100,000.”

When the whole group had completed the Cardiff to Exeter course there were eight riders who have covered more than 544 miles during the four events – and that doesn’t include weekly training sessions in wind, rain or sunshine.

“To do these rides you need the stomach and heart for it,” says Bozzola. “You have to have heart to be an old fart.

“I reflected on the Old Farts’ physical and mental toughness plus sheer strength of these most selfless people. A few people doubted whether our group could finish this huge challenge, but finish it we did.

“Whenever somebody fell or injured themselves they got up and went again. I salute everybody,  a very, very special group of people and an absolute pleasure to ride with.”

It was a gruelling ride – by far the toughest in four years of OF cycling – the start at 5am (Roath Park Rec, Cardiff).

There were refreshment stops at the Boars Head, near the old Severn Bridge, Bridgwater, Taunton and the Stoke Arms pub in Exeter before the final descent to St James Park.

Exeter City FC was the venue for a huge celebration party – starting with Tina Turner’s ‘Simply The Best’.

Next up for the Old Farts is their Summer Ball at Portland House, Cardiff Bay on Saturday, September 14.