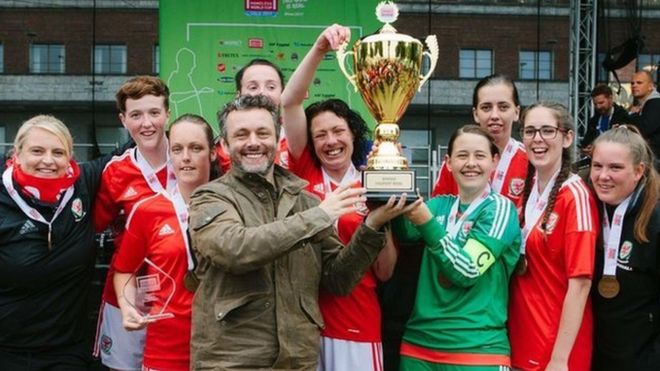 Wales women celebrate after winning the Cabana Cup in 2017.

More than 700 homeless people from all over the World will walk from Principality Stadium to Cardiff Castle on Saturday morning and launch their 2019 World Cup.

The launch parade will go to Cardiff Castle via Westgate Street and St Mary’s Street with the opening ceremony, which is open to all, held inside the grounds.

No public funds have been used to organise the 17th Homeless World Cup football tournament which kicks off on Saturday.

Wales have men’s and women’s teams in a competition, being played at Bute Park in Cardiff, which attracted entries from 57 different countries from all over the World including Africa, Far East and Europe.

The Welsh teams are selected via Street Football Wales League in Cardiff, Newport and Swansea.

Award-winning Welsh actor Michael Sheen has been working full-time preparing for the tournament, saying he had become ‘frustrated’ with simply signing up to causes as a star name.

Three years ago the 50-year-old, who was born in Newport and grew up in Port Talbot, returned to Wales from his former home in America to try to make a practical difference.

“I now split my time between Wales, London and America, as I was dissatisfied,” said Sheen. “I felt I was a bit of a sham.

“Although it does help to a degree to have an actor’s name attached to something, I wanted to be more involved.”

Sheen says homelessness had been ‘a live issue’ in Cardiff for a year or so.

“You go down the high street and see people in tents,” he says. ‘There’s been controversy about how the authorities have handled it.

“The difficulties surrounding the rolling out of universal credit and the arrival of the food banks mean it is very much on people’s minds.

“If you as a private citizen want to give money to someone else, what I’d suggest is you also talk to them. It might even be more beneficial.

“Not just to walk by. If you decide not to give money because you’re worried they may spend it in a way you don’t think is wise, for whatever reason, then fine.

“But when you go home, perhaps think about supporting a charity or finding out more about the situation, rather than just blocking it out of your mind.”

Sheen talked about the World Cup, saying: “The experience of coming to play in this tournament and wear the badge of your country has a huge amount of power.”

They came up with the idea over a beer and two years later the first tournament was held in Graz, Austria.

Since then, it has been held annually across the world including Melbourne 2008 and Rio 2010.

The tournament is organised by the Homeless World Cup Foundation charity which operates through a network of more than 70 street football partners around the world.

The aim is to use football to inspire homeless people to change their lives and to change public perceptions of homelessness along with the issues around it.

Keith Morgan, a Cardiff City fan since 1962, is a key organiser of the Homeless World Cup and says: “The tournament is organised to help raise awareness of the homeless issue.

“Playing in a team helps people belong and take responsibility, for themselves and teammates. They are part of a team and that helps self belief. Representing your country is a huge boost.

“Wales sent a women’s team to Mexico and some of the players had scarcely been out of their home town.”

To qualify for the Wales teams players must have been homeless for 18 months, sleeping on the streets, crashing on a mates sofa or staying in hostels where they can only spend a few days.

There is three pitches in Bute Park for the World Cup. One has a grandstand which holds 1,100 spectators, while the other two cater flor between 250 and 300 people.

Matches are played on a five-a-side pitch over two seven-minute halves, and teams have only four players including a goalkeeper and one forwards who has to stay up front.

All players are staying in Llys Talybont student accommodation where food will also be provided. Cardiff University are being paid for looking after the teams, although they are doing it at cost price.

Edinburgh and Glasgow are the UK cities which have previously hosted the free entry tournament, while host cities include Paris, Milan and Cape Town.

Medical people and counsellors are at the World Cup throughout the week in case they are needed, while there are talks about homelessness, one of those by Sheen, in a marquee at Bute Park on Sunday, Tuesday and Thursday.

The World Cup finals are on the same day that Manchester United and AC Milan clash in the International Challenge Cup at Cardiff’s Principality Stadium on Saturday, August 3 (5.30pm).

Scottish players were waved off by Rangers boss Steven Gerrard when they headed south to Cardiff, while Wales players have received official caps marking their appearances for their country in the Homeless World Cup.

Street Football Wales (SFW) founder Keri Harris has been lobbying for years for his players to receive the same recognition as elite stars like Gareth Bale by receiving a cap for turning out for their country.

And, as they prepare to host the Homeless World Cup for the first time, 100 former players received caps at Dragon Park in Newport – Welsh football’s national development centre.

Current team coach and Big Issue employee Wayne Ellaway was honoured along with Dee Sampson, whose remarkable story had such an impact on actor Sheen that it inspired him to lead the bid for Wales to host the 2019 tournament.

Sampson’s optimism is infectious. When she scores, the team celebrate that bit louder.

After serving a jail sentence for drug offences, Sampson lost her house and after being released in 2013 spent the next three years living on the streets.

“I didn’t have a clue how to live on a street,” she says.”It was the community of homeless people that taught me how to do it. It sounds silly, in so many ways unfortunate, but it was also an amazing experience,” she reflects.

“When I eventually got a hostel last year I was invited to Street Football Wales. I had never kicked a ball in my life. The next thing you know I’m preparing to play for Wales in the World Cup.

“Football really helped me to get some stability back in my life. It builds confidence and helps you to realise your full potential.

“I’ve turned my life around. I don’t get into any trouble anymore with drugs or alcohol. I’m now going home clean to my three children.”