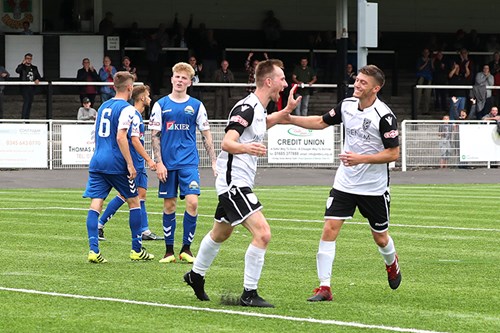 Merthyr Town are hopeful former Cardiff City striker Gethyn Hill will return to action when they play Gosport Borough at the MetCoaches Stadium on Saturday (3pm).

The Martyrs have found goals hard to come by in their opening two BetVictor Southern League Premier South fixtures, suffering a 1-0 defeat at Harrow Borough and drawing 1-1 at home against Weston-super-Mare.

Hill and Ryan Prosser are Merthyr’s main centre-forwards and both missed the early fixtures after suffering injuries in a pre-season clash with Cardiff Met FC.

Prosser, a big, powerful target man, looks likely to be out for some time, but Hill, a fast, exciting striker, has made good progress and will be assessed before the visit of Gosport.

Manager Gavin Williams’ team suffered in midweek when Weston equalised from a controversial penalty awarded in the sixth minute of injury time after Ian Traylor had scored his first goal of the season with 70 minutes gone.

Gosport had their own penalty drama during Tuesday’s 1-0 defeat against Salisbury, who scored the only goal from an injury time spot-kick.

The last time Merthyr played Gosport was last season when the Martyrs sealed a 3-0 away victory at Privett Park thanks to goals from Prosser, Traylor and Kieran Lewis.