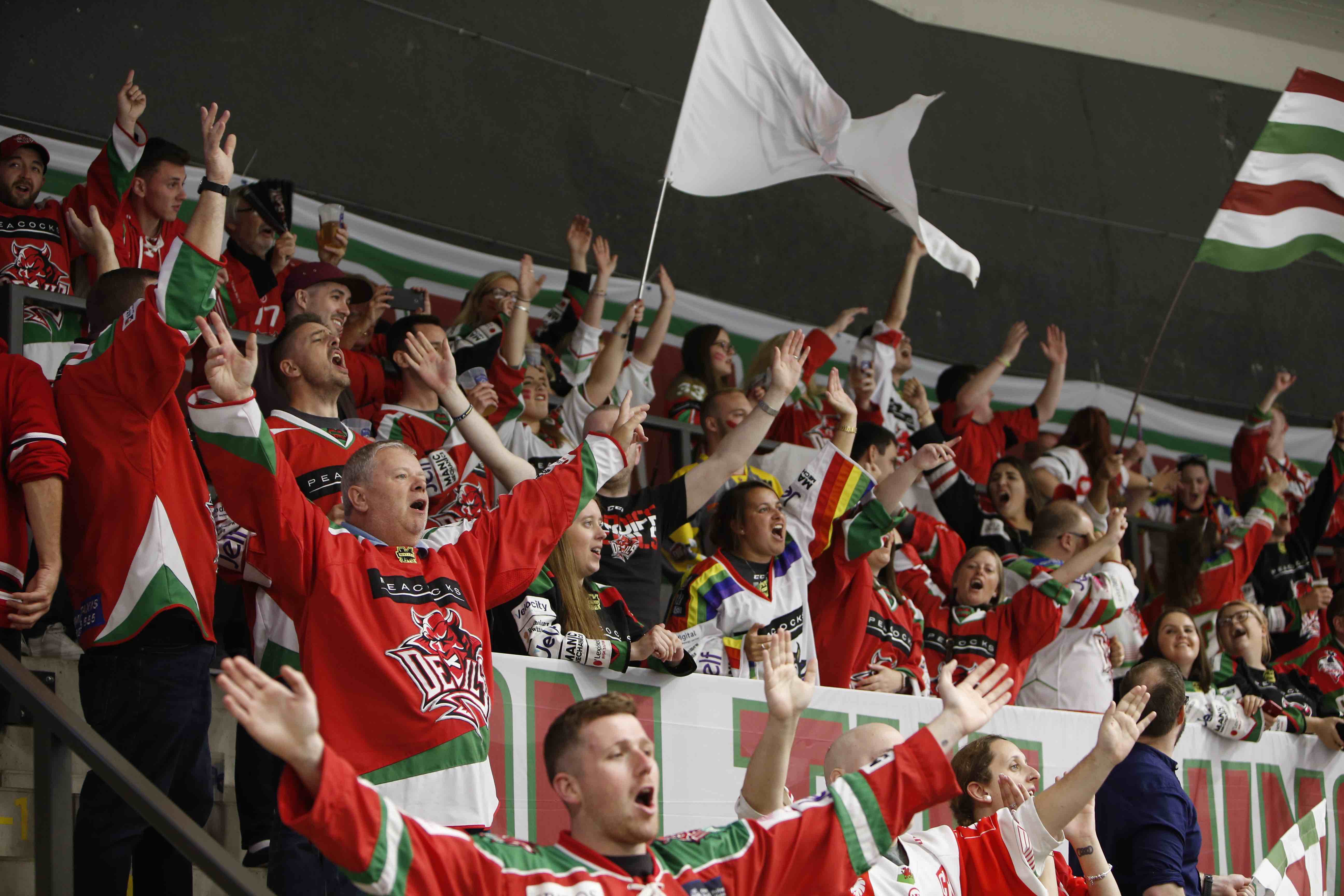 Dai-Sport are in Europe with Cardiff Devils. Ice hockey journalist Terry Phillips travelled for Champions Hockey League matches in the Czech Republic and Austria – and was among more than 250 Devils fans for the away win sat Graz 99ers.

There have been many, many magnificent moments in Devils’ 30-plus year history, but earning their first ever CHL road win with such style is surely number one.

Captain Joey Martin, currently ruled out by a niggling injury, flew in to watch the match and his team responded with a top notch European display.

Devils stand proudly top of group H ahead of reigning CHL champions Frolunda Indians from Sweden. The matches between Cardiff and Frolunda, home and away next week, are now critical with two qualifying places available.

Austrian fans then loaned Devils a drum – without being asked – so the Cardiff faithful could beef up noise levels from their end.

Graz 99ers then threw a party after the game at the Merkur Eisstadion to celebrate the club’s 20th anniversary, but all the joy was with Devils fans, players and staff.

Masi Marjamaki, a forward who adds speed, size, aggression and nous to the Devils team, is already a fans favourite only a few weeks after moving from Czech hockey to South Wales.

The players came out of their locker room to join fans in their celebrations and everybody around, including the man himself and Blair Riley, sang the new Marjamaki song.

Stephen Dixon became 34-years-old on the day of and celebrated by helping Devils earn a stunning victory, while he was treated to a rendition of ‘Happy Birthday dear Dicko’ by fans.

Our fans are amazing.. Hell of a shift from the Red Army in Graz.. first thing I’m looking into this week is if we can make a standing section at Viola Arena.. You guys killed it last night.. https://t.co/PcHFnbgh6Q

Canadian Gleason Fournier, who scored Cardiff’s first goal in Graz, is 28 today, while Finnish ace Matias Sointu, a short-term signing to step in for Martin, is giving Andrew Lord a problem the head coach will love.

Sointu produced another excellent performance against Graz and provided three assists. He played alongside Dixon and Sean Bentivoglio and stood out in the pressure and tension of CHL.

Ice hockey commentator John Donovan tweeted: “Sointu is such an intelligent, low maintenance hockey player. Good hands, good awareness, gets himself on the right side of the puck defensively – can play top six or as a role player. Hopefully, he stays.”

Blair Riley scored three points in the match – a goal and two assists – while Sean McMonagle netted from an outstanding wrap-around move which left Graz stunned.

Bryce Reddick and Sean Bentivoglio were the other scorers for Devils, while goalie Ben Bowns broke Graz hearts with 42 saves.

Devils led 1-0 after the first period, stormed into a three-goal lead in the second, but were pegged back by two Graz goals.

Both were scored by two-time Stanley Cup winner Dwight King, who lifted the NHL championship trophy with Los Angeles Kings.

Last 3-2, the home team saw their chance and pressed, but Cardiff stayed calm and composed while maintaining a team work ethic which left Graz players breathless.

Riley, with a tip from McMonagle’s point shot, and Bentivoglio, with a beauty of a finish through the goalie’s legs, finished off the Graz challenge.