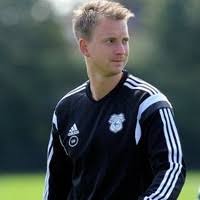 It simply wasn’t the Bluebirds’ day in this Professional Under-18 Development League fixture at Cardiff Sports Campus.

They hit the crossbar and a post twice Isaak Davies missed from a penalty and the visiting Sky Blues scored the only goal from a spot-kick of their own.

Harrison Nee was the Coventry player brought down and he jumped up to convert the penalty on seven minutes, his fifth goal of the under-18 season.

The next test for Cardiff is against Queens Park Rangers away next Saturday (Noon), while they entertain Ipswich on Saturday, December 7 (11am).

Coach Matthew Bloxham’s young Bluebirds won 7-3 in their last match, against Colchester United, and were hoping to build on that convincing victory.

Cardiff made four changes to the starting line-up from their match against Colchester with Australian goalkeeper Jaimie Cogman, Jac Clay, Taylor Jones and Owen Pritchard all called up.

At the other end Cogman produced an excellent save to deny Nee a second Coventry goal.

Siyabonga Ligendza headed wide just before half-time, while Colwill went close from a free-kick 25 yards out.

With 52 minutes gone Ligendza was fouled inside the penalty area, but Davies failed to convert the resulting spot-kick.

Evans smashed his shot against a post in a frustrating match for Cardiff, while Davies was close to turning Colwill’s delicious cross.

Coventry goalkeeper Cian Tyler denied Evans with a big save on 80 minutes, while Davies was just wide from an acute angle during second half injury time.

It was a battling, spirited performance from the Bluebirds and they did enough to have won, but the Sky Blues clung on to their narrow lead.