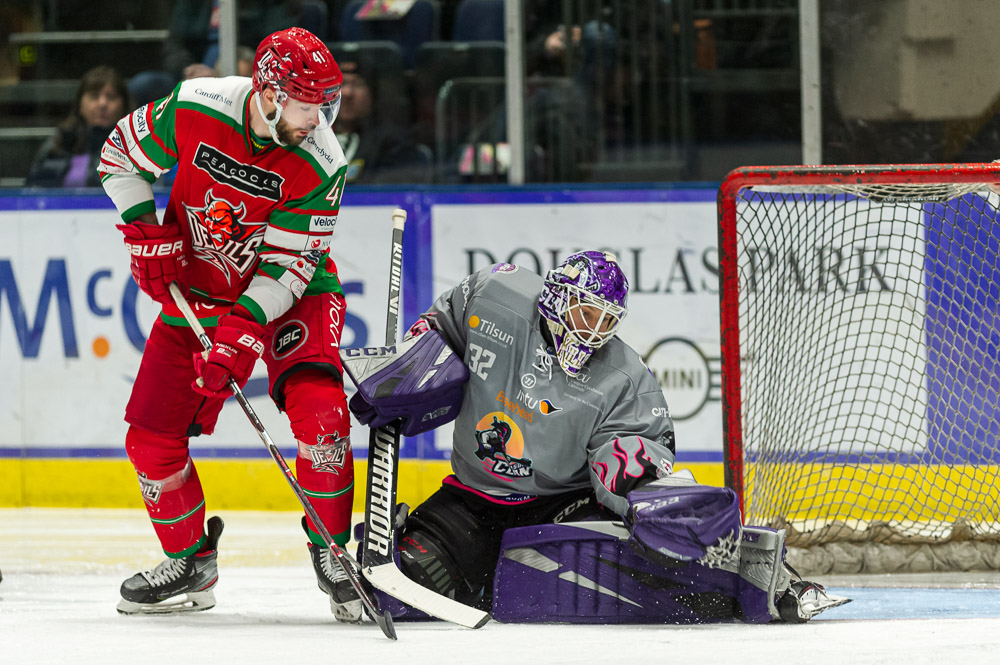 All seven goals were scored on the power play and Clan did themselves no favours by running up 54 minutes in penalties during the final period.

“It was a fiercely contested game, particularly in the first,” said Devils head coach Lord, who sends his team out against Fife Flyers away this afternoon.

“We didn’t have the best of periods then, but defended solidly.

“There was a lot more jam to our game in the second and we had a lot of offensive zone possession.

“That allowed us to go on the powerplay a few times.

“The game was a nailbiter, but we capitalised a couple of times in the third to put it out of reach a little bit.”

That left Devils second in the EIHL table, three points behind Sheffield with five games in hand. They have the league’s best points percentage by some distance.

Clan’s Travis Erhardt said: “We ended up spending what felt like three periods in the penalty box.

“No way can you win when you are playing 3v5 for eight minutes at a time.”

Team-mate Jordan Heywood agreed, saying: “Penalties killed us. We have to keep our cool when things are going bad.”

Clan’s Matt Beca collected 32 minutes in penalties for abuse of officials in the final 20 minutes and was thrown out.

“We were the better team 5v5 for sure,” said Clan coach Zac FitzGerald. “In the first we played well and outshot Devils three to one.

“We were getting inside and limiting them, while we made a great start to the second.

“In the third were got a lot of 3v5 practice. That’s the only positive I can think of. It was out of our hands.”

Cardiff again rested Sean Bentivoglio, who has a minor strain, with Bryce Reddick switching from D-man to attack.

Both Fife and Cardiff are looking to end their weekend on a high following Saturday night victories when they meet in Kirkcaldy this afternoon.

Flyers won 5-1 in Dundee yesterday to keep themselves among a mix of teams in mid-table.

Today’s fixture is the 350th domestic game Lord has been in charge of Devils.

The first period in the Glasgow v Cardiff match was goalless, while the second ended 2-2.

That was the score until 48-24 when Blair Riley netted the first of three goals in two minutes 12 seconds. Joey Martin (50-17) and Sean McMonagle (50-36) were the other scorers in a hard fought win.

An early Brendan Connolly goal extended his points streak to 14 games and gave the Steelers a one-goal lead after 34 seconds. David Phillips’ shot went all the way through at 44-54 to double the lead.

Belfast risked everything, but Marc-Olivier Vallerand and Eric Meland both scored on the empty net at 57-47 and 59-42 respectively to secure a four-goal win for Steelers.

It’s a dress rehearsal for Wednesday’s Challenge Cup Quarter-Final First Leg in Nottingham, where the Flames visit tonight and then again midweek.

The Panthers have had an excellent week so far with wins over Manchester and Coventry to take them to within a point of climbing above Glasgow and going into the top four. Guildford can, however, leapfrog the Panthers into fifth with a regulation victory themselves.

Following disappointing defeats yesterday, Dundee host Coventry with both sides really in need of getting a win.

The Stars can pull themselves back to within a point of the playoffs with a victory over the Blaze, but a loss would see them drop back to five points adrift. After a run of good results, Dundee have now lost three on the spin.

Coventry have been on a worrying run of form that has seen the Blaze lose their last six games in all competitions with no win since 17 November. The team has dropped from the cusp of the top five to now being in danger of falling out of the playoff places altogether.

Man of the match: Blair Riley