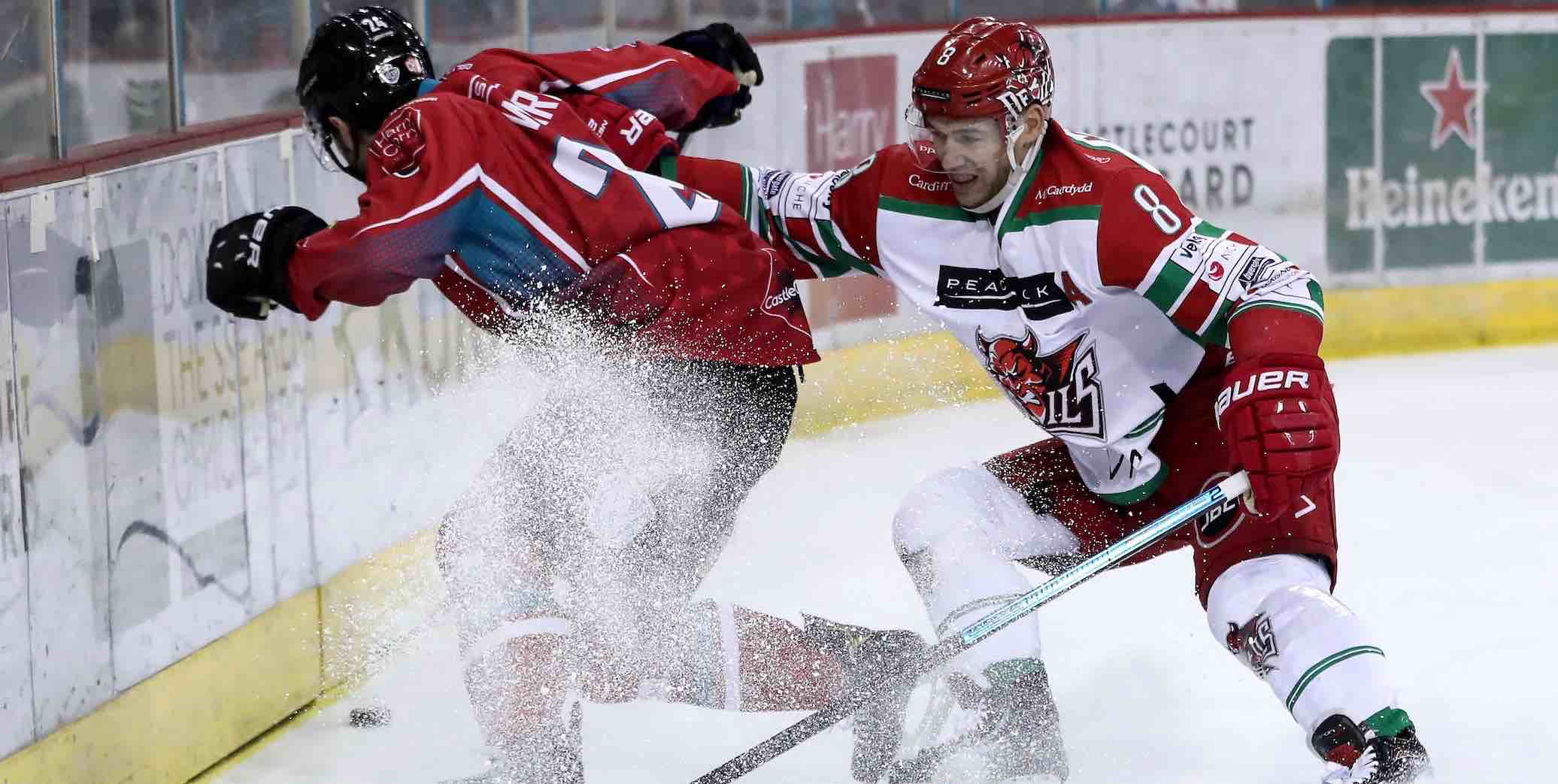 Martin’s men produced an outstanding team performance and powered to a fifth successive win in Elite League and cup.

Both men are 6ft 4ins tall and it was an evenly matched fight with both men getting in big punches and earning five minute penalties.

Defeat on home ice was a bitter blow for Giants with the second leg to be played in Cardiff Bay next Wednesday (7.30pm).

Devils set off on their recent winning run following a terrible weekend when Belfast won back-to-back matches at the Viola Arena in Cardiff Bay, 4-3 and 4-1.

“Now we have to do again what we did last time we were in Cardiff’s building,” said Giants’ coach Adam Keefe. “We can take confidence from the first leg because the team played well. We have to go and produce another effort like that.

“If we do that we’ll get a few more looks and hopefully this time we can put the puck in their net.

“Devils are an extremely good team, while ‘Bownsy’ stood tall and turned away 38 shots.”

Giants’ forward Jordan Smotherman hit the bar – a video review showed the puck did not cross the line – while Martin was denied his second goal by a remarkable Shane Owen save.

These rivals have been the most successful Challenge Cup teams over the last five years. Both have lifted the trophy twice and Belfast are reigning cup holders.

Glasgow Clan are already through to the cup semi-finals, while Sheffield Steelers and Nottingham Panthers both lead convincingly after their quarter-finals first leg games against Manchester Storm and Guildford Flames respectively.

A goal by captain Joey Martin midway through the first period gave Devils their 1-0 victory during a match in which both teams looked tense.

Devils had the only powerplay of the opening 20 minutes with Brian Ward off for hooking, but they didn’t convert

Just after Ward returned to the ice, Mike McNamee touched the puck over to Martin just inside the Giants zone and he rifled a shot over the shoulder of goalie Shane Owen to score (14-25).

Devils were shorthanded three times in the middle period, but Cardiff’s penalty killers, along with the outstanding Bowns kept the home team out.

Giants have failed to score in their last two home games, having been beaten 4-0 by Sheffield Steelers last weekend.

Belfast almost fluked a late equaliser when David Goodwin’s shot rebounded off the backboards and hit Bowns’ back. Devils were relieved to clear the danger.

Martin almost scored a second goal when he skated clear and seemed to fool goaltender Owen, but he threw himself to make an outrageous save from what had looked an impossible situation for the Canadian.

Steelers start with a three-goal lead in Manchester when the second leg is played next Wednesday.

Glasgow’s Jordan Heywood (4-11) and Dundee’s Craig Gans (10-37) both scored and the teams were level until halfway through the 60 minutes.

Ian Watters replied for Flames (23-40), but they face a major test in the second leg.