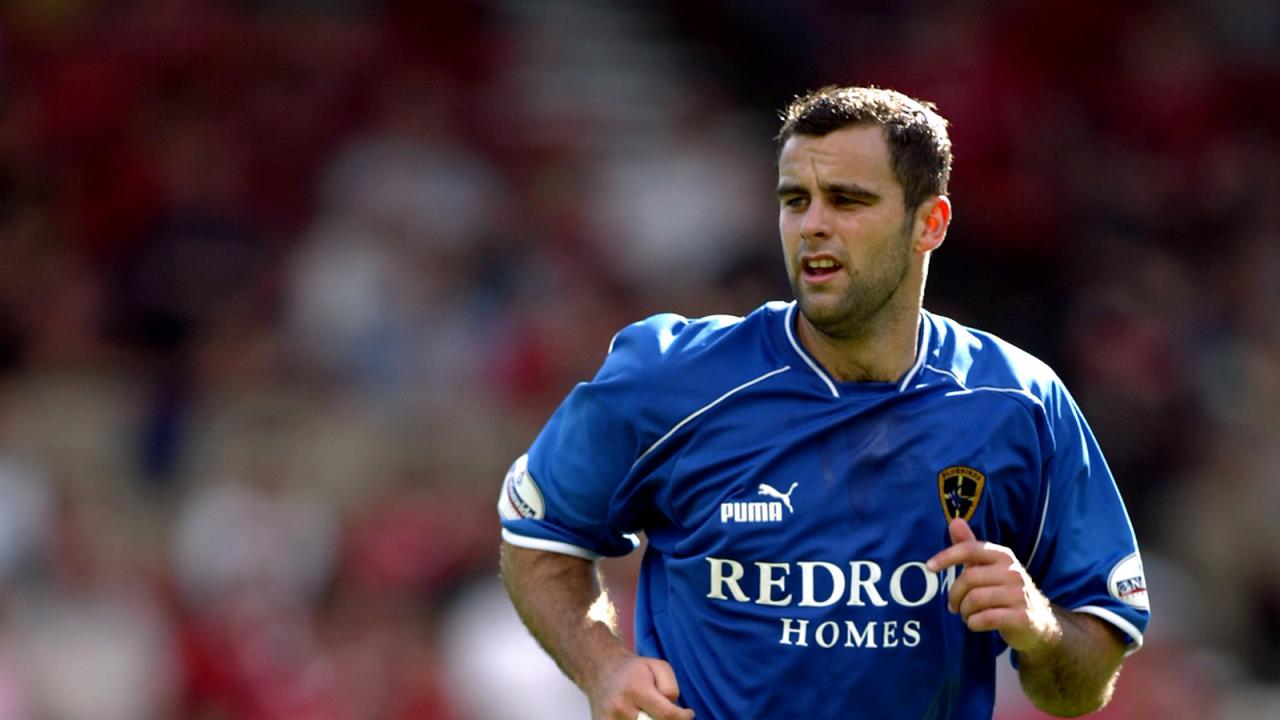 Former Weston-super-Mare and Cardiff City player Chris Barker, who passed away on New Year's Day. Wesston are at home to Merthyr Town on Saturday. Pic: CCFC

Former Cardiff City defender Chris Barker has died at the age of 39. The popular Yorkshireman served the Bluebirds with distinction from. 2002 to 2007, played in the play-off final win against Queens Park Rangers in 2003 and was voted player of the season in 2005. Dai Sport’s Terry Phillips pays a personal tribute to ‘Barks’

Chris Barker is right up there with the best players I met during 50 years as a football journalist. He wasn’t the greatest or quickest footballer, but he was a good, honest, powerful pro who always gave everything for his team.

Perhaps more importantly, Chris was a top class bloke, an honest, friendly man who never said a bad word about anybody.

The last time I met Chris was around three years ago when he was player/assistant manager at Weston-super-Mare. He was on a scouting mission at Cardiff City Stadium for an under-23 fixture, greeting me warmly with a smile and a hug.

It was a massive shock when I received a telephone call on New Year’s Day saying he had died. It has taken me since then to come to terms with that. Awful news.

Chris loved Cardiff City and Bluebirds fans. He grew up supporting home city club Sheffield Wednesday, but chose a move to South Wales from Barnsley even though the Owls were also keen to sign him at the time.

He told me: “I spoke to a number of clubs before leaving Barnsley, including Wednesday, Wolves and Preston North End.

“Then a call came from Cardiff City and the next day I was at Ninian Park.

“The gaffer (Lennie Lawrence) told me about Cardiff’s brilliant supporters and I quickly realised just how passionate they are about their club. I was convinced enough to sign a four-year contract.”

City paid an initial £500,000 fee for Barker plus £100,000 bonus if the Bluebirds earned promotion. They did and Barker played at Cardiff’s Millennium Stadium when they defeated Queens Park Rangers 1-0 in the play-off final.

“That was a great day. The atmosphere was remarkable.

“I loved my time with Cardiff. The fans were always superb to me.”

Absolutely devastating news. A truly great guy looked after me when I signed for qpr will never forget that. Rest in Peace Barks. pic.twitter.com/19OrVOG4Fr

“Running out in front of 75,000 spectators at the Millennium Stadium was amazing,” he said. “That was the biggest match I played in during my career.”

Barker believed his best performance for the Bluebirds came against Bristol City away in the play-off semi-final second leg.

Cardiff had won the first game 1-0 at home and he said: “Leggy (Andy Legg) and I were tasked with stopping Scott Murray, who had murdered us home and away in league matches that season.

“But that evening he scarcely had a kick and we went through to the final 1-0 on aggregate.”

Chris had missed out on a similar occasion when he was at Barnsley. He made 35 appearances over the 1999-2000 season and the Tykes qualified for the  League One play-off final, but Chris was left out of the match day squad against Ipswich Town at Wembley Stadium.

“I was dropped for the final and had a little cry before kick-off,” he said. “It was good to walk out at Wembley, but it would have been great to play.

“That experience made that Cardiff City play-off success even more special personally.”

Chris watched Sheffield Wednesday regularly when he was growing up in Sheffield along with older brother Richie, who made 600 Football League appearances.

“John Sheridan scored the winner,” said Chris, recalling memories of his day out at Wembley.

“My brother, Richie, played for Wednesday when. I was eight-years-old. I started going then and followed them for 10 years, going to every home game.”

Barnsley were the first pro club for Chris, who also played for Stoke, Colchester, QPR, Plymouth and Southend and made 662 first team appearances in all competitions.

He scored four goals during his career – three for Barnsley and one for Southend. He was, though, a highly rated defender.

Absolutely devastating news. A truly great guy looked after me when I signed for qpr will never forget that. Rest in Peace Barks. pic.twitter.com/19OrVOG4Fr

Chris started his career with Alfreton Town in Derbyshire, playing Unbind League football at the age of 18. Barnsley scouts spotted noted his defensive ability and he said: “I was working as a leisure centre lifeguard when Barnsley approached me.”

He made more than 130 appearances for Barnsley and was twice voted young player of the year.

Chris was also named Cardiff Supporters Club plus Valley Rams player of the year during a club presentation evening at the Coal Exchange in 2005.

World in Motion, the sports management agency who represented Barker throughout his 18-year career, tweeted: “It is with great sadness that we learn of the untimely and tragic passing at the age of 39 of Chris Barker.

“Chris was a client throughout his outstanding playing career of over 500 League games for clubs including Barnsley, Cardiff City, Queens Park Rangers and Plymouth Argyle.

“Moreover, Chris was a wonderful person, an absolute gentleman and a pleasure to work for.”

Waking up this morning to the terrible news that Chris Barker is no longer with us. A very hard working, loyal and trustworthy man who will be sadly missed. Rest well Barks. #RIPBarks

Barker was under-18 manager for Forest Green Rovers FC at the time of his death and Hannah Dingley, Rovers’ Head of Academy, said: “We’re all heartbroken to hear this news which came as a shock to everybody.

“Our immediate thoughts are with his family and friends.

“Barks was a strong, inspirational leader to our under 18s and a much loved colleague. We’ll be offering help and support to those at the club affected by the tragic news – particularly our young players, and ask that Chris’ family get some privacy at this challenging time.”

Now Chris has passed away at the age of 39. He will be missed by many. A tragic loss.

‘Barks’ answered a few questions during his time with Cardiff City. Here are a few answers:

Who did you room with on Bluebirds away trips? ‘I used to room with ‘Crofty’ (Gary Croft) and Thorney (Paul Thorne), but later it was Paul Parry., We had a good laugh and took the games console with us. We would play on that and chill out.’

Where did the City players go to celebrate after the play-off win against QPR? ‘The Belgian place, Bar 38, across the road from the Millennium Stadium. It was a top night and a long night followed by an even longer morning, But we’d earned it.’

Favourite food? ‘I can tell you I have tomato ketchup with everything.’

RIP Chris. You were loved by Bluebirds fans.