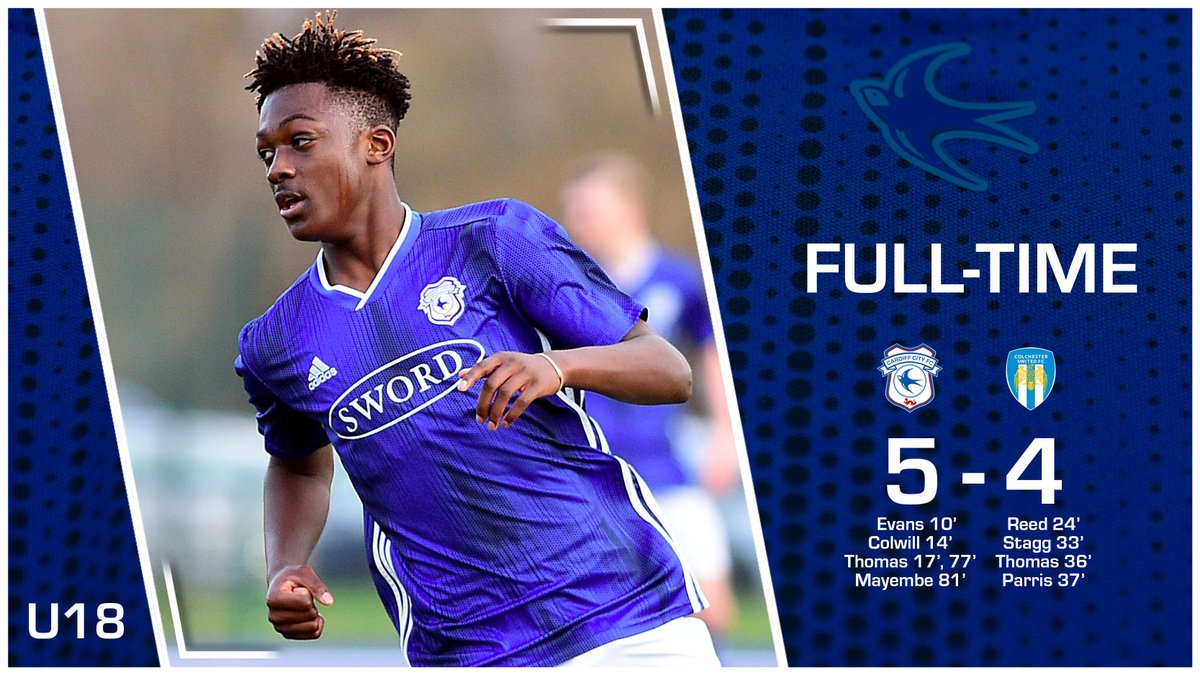 Terrific ‘Taz’ clinched victory for the Bluebirds’ under-18 team to victory in a nine-goal thriller at Cardiff Sports Campus.

Ntazana Mayembe fired the winner after 81 minutes after the visitors had stunned Cardiff City by scoring four goals in 13 first half minutes – three of those inside 180 seconds.

City were trailing 3-4 at half-time, but showed remarkable character and spirit to hit back and snatch victory by scoring two second half goals.

Frazer Thomas (2), Kieron Evans, Rubin Colwill and Mayembe scored for Cardiff on a day when they could so easily have stumbled at home, but powered back to take the points.

Cardiff started in style and Colchester looked down and out when they were 3-0 down, but the boys from Essex were far from finished.

Evans fired the first City goal when he fired past goalkeeper Chandler Hallett with a shot from the left-hand side of the penalty area.

Colchester were denied by City goalkeeper Bradley Stewart, who made big saves from Andre Hassanally and Stagg before Colwill (14 mins) and Thomas (17) added to the Cardiff total.

Thomas created the chance for Thomas and then added the third with a curling shot from 25 yards.

Then came Colchester’s remarkable recovery to lead 4-3 before midfield player Thomas, who is from Cynon Valley and has been with Cardiff’s Academy since the age of eight, scored his second goal when he chipped the ‘keeper after 77 minutes.

Mayembe, an 18-year-old from Bridgend who has played for England and Wales at junior level, then scored the winner when he fired home from a narrow angle nine minutes from the end.

‘Taz’, an attacking midfield player with lightning pace, is highly rated in the Bluebirds Academy scored his eighth goal in 14 under-18 matches this season.

Cardiff play Bristol City away next Saturday, while their next home fixture is against Watford on Saturday, February 15 (both 11am).