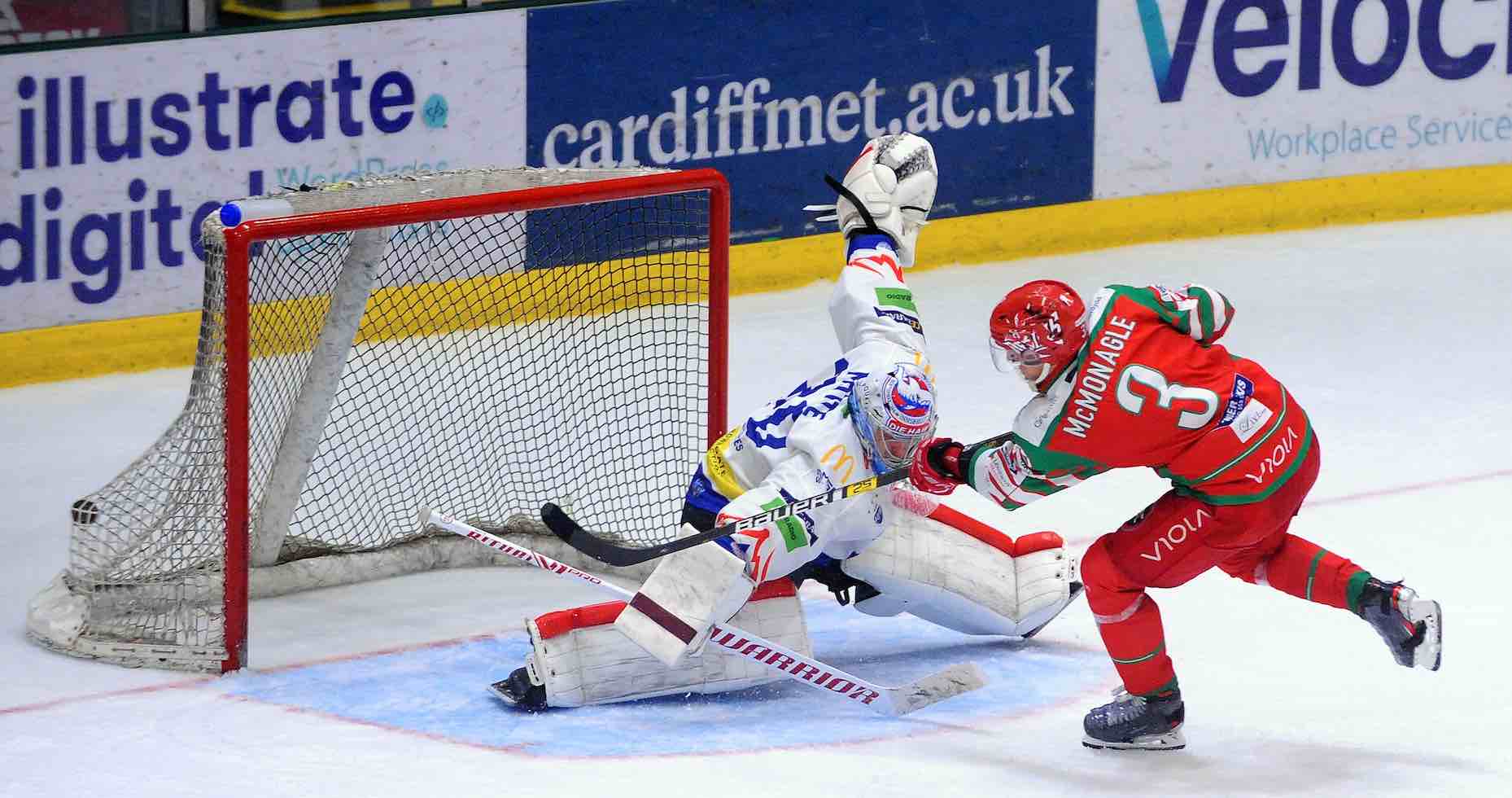 Evan Mosey returned to action for Cardiff Devils and helped his team earn a thrilling Elite League victory in front of a sell-out 3,000-plus attendance at the Viola Arena.

Devils roared back from 3-1 down to force the match into overtime and won 4-3 after a penalty shootout.

It took eight rounds of penalty shots before Devils won thanks to a Sean McMonagle goal.

Defenceman McMonagle was cool and composed as he skated down the an d left American goalie CJ Motte helpless with a neat finish.

“Sean relishes those moments and it’s fun to watch him,” said head coach Andrew Lord. “We had our eyes on him for years before he joined the Devils. He is a major asset.”

American forward Mosey made his first appearance of the season, having suffered a serious knee injury which required surgery while playing for Great Britain over the summer.

“There have been tons of ups and downs for Mose, but his attitude has always been awesome,” said Lord. “Our medical team and Evan have worked hard with his rehab and he is thrilled to be back playing.

“He has made a fast recovery for this type of injury and his speed overall will help us.

“I’m proud of the club, the owners and Todd Kelman for sticking with Evan when maybe a lot of teams may not have. Now we can reap the benefits of that.

“It was a special night for Mose.”

Two first period power play goals for Coventry Blaze put the visitors on top and Lord was unhappy with his team at the stage.

“The first few shifts were fine and we scored a PP goal which energised the building. But we conceded two sloppy offensive zone penalties and Blaze scored on both powerplays.

“That really changed it and Coventry were moving their feet. They were fast, exciting, have a ton of skill and utilised it in the right way.

“From around six minutes through to halfway we were really bad. Poor. Slow. It looked as though we were still on the couch from the EIHL break for Great Britain’s Olympic qualifiers.

“After that we were awesome. The desperation was there, the urgency went way up and the way we executed.”

Lord tweaked the line and that clearly had a positive effect in Devils surging recovery.”

Cardiff came from two goals down to beat Blaze in a shootout, closing the gap on leaders Sheffield to three points because Steelers lost 5-2 at home against Dundee Stars.

Devils went ahead against Blaze after 5-15 played thanks to Gleason Fournier’s shot deflecting in front off Justin Haché on the powerplay with Masi Marjamaki scoring.

Coventry made it 1-1 two minutes later when Evan Bloodoff was quickest to react to a rebound during a powerplay and Haché put the Blaze in front with a slapshot from the point on a PP at 18-15.

Overtime was a frantic, end-to-end affair but neither side could find a winner.

In the shootout. only McMonagle and Charles Corcoran could score through five rounds and and the game went to sudden death.

McMonagle was sent up for three more penalties and eventually scored on the last while Janne Laakkonen overskated the puck in the offensive zone to hand Cardiff the extra point.

Devils, who rested Charles Linglet and Matt Pope against Coventry, travel to play Guildford Flames on Sunday evening at the Spectrum.

Cardiff have the league’s best road record and head to Surrey knowing that ending the weekend only three points off first place with four games in hand could be a crucial moment of the season.