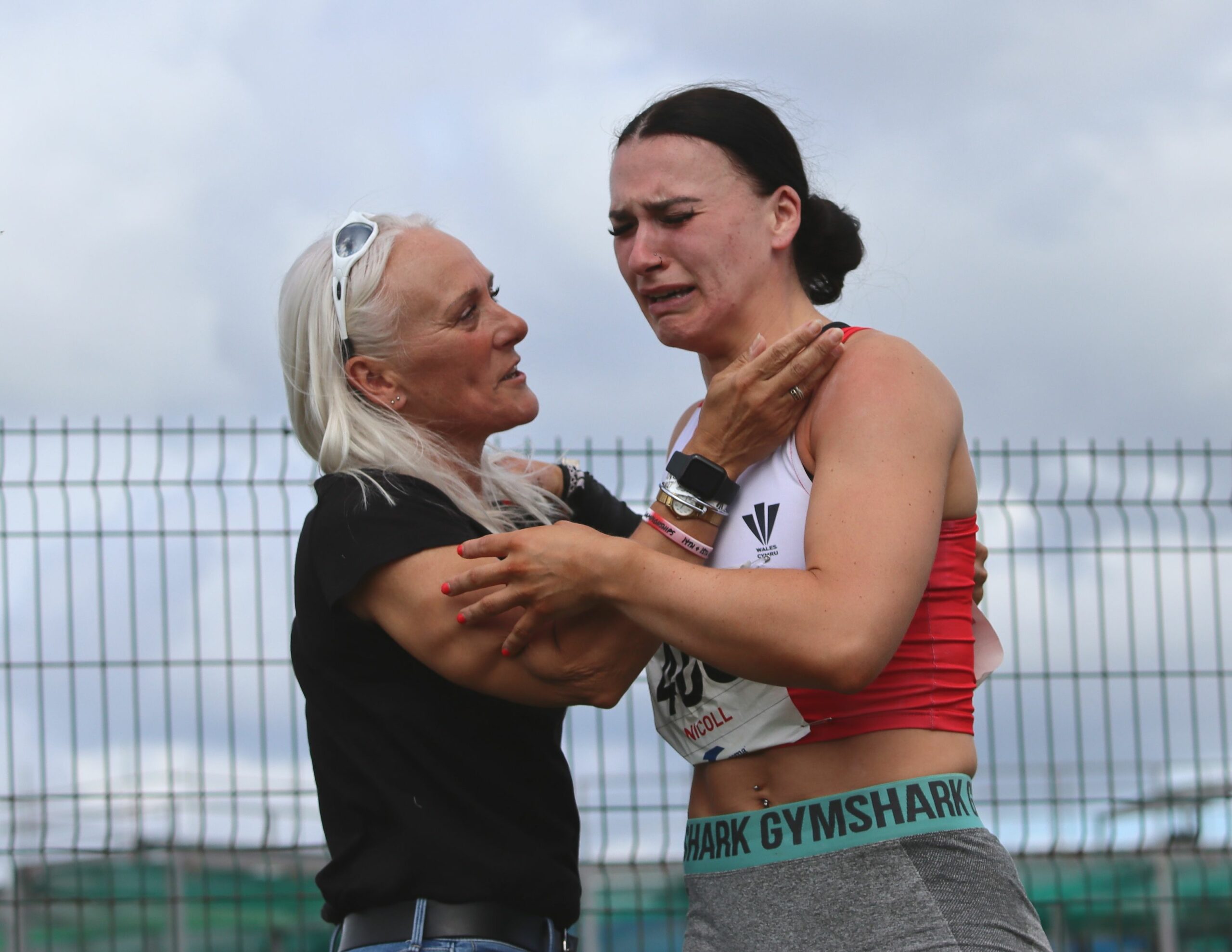 Adele Nicoll is congratulated by her mum. Pic: Owen Morgan.

Shot putter Adele Nicoll took her last chance to claim a Commonwealth Games qualifying standard on Saturday before turning her attention to her bobsleigh ambitions.

The Birchfield Harrier had been knocking on the door of claiming the qualifying standard all season, but appeared to be running out of time when she took part in Saturday’s Welsh Athletics Championships in Cardiff.

With bobsleigh World Cup trials on the horizon next month, Nicoll needed to nail the Commonwealth Games standard in Cardiff on Saturday.

And that’s exactly what she did with a brilliant new personal best of 16.89m in the fourth round, which took her well beyond the qualifying standard for next year’s Commonwealth Games in Birmingham.

Having missed out on selection for the 2014 and 2018 Games, the emotions flooded out for Nicoll as officials announced the distance which also won her the Welsh title.

A delighted Nicoll told me afterwards: “Yeah, it had built up, you know, this isn’t something that you train a few weeks for.

“This is something that you train years for. The last Commonwealth Games on the Gold Coast, I got the B standard, but unfortunately I didn’t get selected to go. I had to go through the appeals process, but didn’t get the appeal.

“So, for this time, to qualify outright, to get that A standard. I couldn’t be more happy with it to be honest, it’s fantastic.

“It’s third time lucky. I was going for Glasgow, but didn’t quite make that. Australia, I got the B standard but wasn’t selected. And you know, it would have been so easy for me at that point to just quit.

“I had a lot of Welsh Athletics staff come up and give me a hug afterwards because they know the journey, they know how mentally tough it is.

“This sport is so tough, mentally. You’ve got to be hardcore to do this because it puts you on a rollercoaster emotionally, definitely. I’m so glad I stuck with it.”

Nicoll hasn’t just “stuck with it”, she has added a new sport to her shot put exploits, having taken up bobsleigh last year.

However, juggling the two sports meant she had to deliver the Commonwealth standard on Saturday.

“Honestly, today was a perfect opportunity for me to do that,” said Nicoll.

“It was my last chance of this season because I’ll be hopefully going away from September to around January time with bobsleigh.

“It would have only given me a very short window when I got back to qualify so I thought ‘you know what, if I can get it done today’?

“And to do it at the Welsh Championships, in the new amazing new throwing circle, I’m so happy about that.”

Nicoll says training for the bobsleigh, which has seen her concentrate on her natural strengths of speed and power over size and strength, has benefitted her shot putting this season.

“The training is so geared towards just being powerful. And this is what shot put is, it’s about, power. And you know, for me, I love it because there’s so many young girls that look up to me for not being the stereotypical, heaviest thrower in the world.

“I’ve lost two stone and now I’ve just got a huge PB and qualified for the Commonwealth Games and I feel good, you know. I’m not that heavy, but I’m stronger and more powerful.  So, I hope I’m bringing a new era of shot putters to Wales.”

With the Commonwealth Games qualifying standard in the bag, Nicoll could be in for a busy few months as she bids for a place in the bobsleigh World Cup and next February’s Winter Olympics in Beijing.

“I know! Now I’ve got my trials for the World Cup in September. Hopefully, I can get a spot to race World Cup. It would be amazing to go to a Commonwealth Games and the World Cup.

“And then, you know, the Olympics is also in February so if I can push towards that I just couldn’t even think of a better year to be honest, especially after everything with the pandemic and all of the barriers that everybody’s had to overcome. That would be an amazing.”

Not content with booking a Commonwealth Games spot and winning the Welsh shot put title on Saturday, Nicoll earlier won the Welsh discus title with a throw of 48.71m.

The men’s shot put was won by Daniel Cork, who claimed the Welsh title with an effort of 17.02m. Cornwall’s Patrick Swan was runner up with 16.92m ahead of Dafydd Herdman in third.

In the men’s discus, F44 athlete Harrison Walsh warmed up for the Tokyo Paralympics by throwing 51.21m.

Full results from Saturday’s action are available on the Welsh Athletics website.