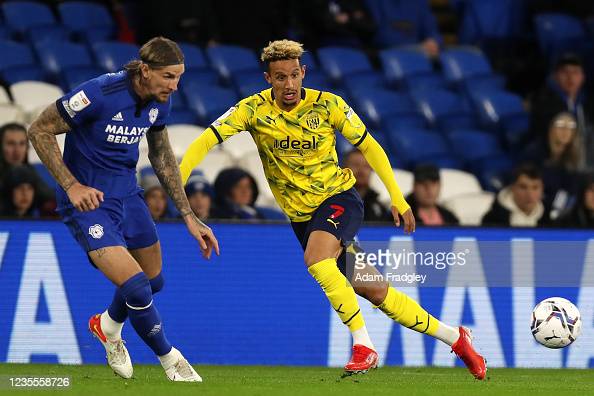 Cardiff City defender Aden Flint has had his red card against West Brom overturned and avoided a three-match ban.

Flint and West Brom goalkeeper Sam Johnstone were sent off at the final whistle as tempers boiled over following Sunday’s 1-1 Sky Bet Championship draw at The Hawthorns.

A post on the FA Spokesperson Twitter account read: “Aden Flint will be available for Cardiff City FC’s next three fixtures after an Independent Regulatory Commission upheld a claim of wrongful dismissal and removed his suspension.

“The defender was sent off for violent conduct during the EFL Championship fixture against West Bromwich Albion FC on Sunday 2 January 2022.”

A melee involving most of the players occurred after West Brom had a penalty appeal turned down in the final seconds.

As Flint prepares to face Preston in the FA Cup third round at Cardiff City Stadium on Sunday, Swansea City’s Michael Obafemi has been told to expect no favours this weekend.

Obamefi could come face-to-face with his former club when Premier League Southampton visit the Swans on Saturday evening.

The Irish striker moved in the summer but has so far made a low key impact with just one goal in 10 appearances.

He and his Swansea teammates have not played a game since December 11 due to a number of postponements caused by Covid outbreaks at the club and their opponents in recent weeks.

But Obafemi could be involved this weekend against his former employers and former teammate Nathan Tella says Southampton’s players are relishing a reunion.

“We spoke a bit about it in the changing room. We just said it is the ‘Michael Obafemi derby’,” Tella said, speaking to Hampshire Live.

“We are all looking forward to seeing him again, but at the end of the day, it is not a friendly, it is a competition and we want to win, so we have got to put all friendships aside and hopefully get the win.

Well, this is interesting. Aden Flint’s appeal against his red card post-match on Sunday upheld. 3-match ban overturned. Albion chose not to appeal Sam Johnstone’s red, which arose from the same incident.
In the absence of clear footage, hard to comment beyond that. #WBA

“I have spoken to him quite a bit. He is enjoying it there as well, and that’s the main thing. I hope he continues to play and I wish him the best of luck.

“Not against us though. I hope they lose then, but I still want him to do the best he can and be the best player he can.”

The Swans have recalled forward Kyle Joseph from his loan spell at Cheltenham Town.

Joseph, 20, joined the Swans from Wigan last summer, before making the switch to join the Robins in League One.

He has scored four goals in 22 appearances in all competitions for the Gloucestershire club, having featured twice for the Swans prior to his loan switch.

Joseph will be in contention for the upcoming league fixture at Huddersfield, but cannot play against Southampton this weekend as he is cup-tied.