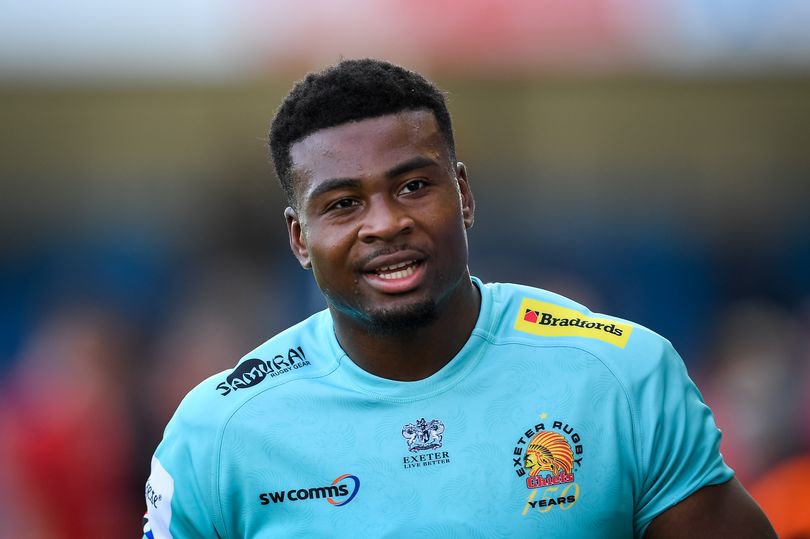 Christ Tshiunza may only have an hour of Premiership rugby under his belt, but the Welsh teenager could find himself playing against the world champion Springboks next month.

The 19-year-old Exeter University student was the surprise package announced in Wayne Pivac’s Welsh squad for the four autumn internationals against the All Blacks, Springboks, Fiji and Australia.

Born into a ‘French Christian family’ in the DR Congo, the 6ft 6in tall, 17st 7lbs giant came to the UK with his family when he was six.

They moved to Cardiff in 2010 and he eventually ended up at Whitchurch High School, known locally as the ‘School of Champions’.

“He’s the next cab off the sporting rank at Whitchurch HS and is following in the footsteps of Geraint Thomas, Gareth Bale, Sam Warburton and Kiran Carlson (Glamorgan cricketer),” said Whitchurch HS head coach Steve Williams.

“Barring injury we always thought he had what it takes to go all the way in the game. As well as having all the necessary physical attributes, he has huge athletic ability, great attitude and a tremendous work ethic.

“In his last few years at the school he used to live in the gym. He was only ever the second or third choice second row for Cardiff Schools at U15 level, but he worked hard on his game after that and went on to win Wales U18, U19 and U20 honours a year early.

“He was a good basketball player in his younger days and always worked hard on his footwork.

“He was also good enough in the classroom to get an A and two Bs in his A Levels to clinch a place at Exeter University.

“All the foundations are in place for him to go on to become a great player and he is working under a great coach at Exeter Chiefs in Rob Baxter. I’m sure he can bring out the best in him.”

After a mere 61 minutes of appearances off the bench in four games for the Chiefs this season, Tshiunza made his debut for Exeter University in the BUCS Super Rugby championship against Cardiff University on Wednesday.

Pivac is looking for a long term replacement for Alun Wyn Jones and Tshiunza is the same height, currently two stones lighter and 17 years his junior.

Tshiunza’s stated aim when he joined Exeter was to try to play for Wales at the 2023 World Cup. This is the first step along that path.

The All Blacks will arrive at Cardiff’s Principality Stadium on October 30 as overwhelming favourites to continue a long run of success in the fixture.

Wales have not beaten New Zealand since 1953, losing 31 games on the bounce against them, with 16 of those defeats being in Cardiff.

Pivac is without a number of injured players, with the likes of Leigh Halfpenny, George North, Justin Tipuric and Josh Navidi all absent, while Liam Williams recently underwent appendix surgery and is being closely monitored.

And as Wales’ first autumn encounter – they also meet South Africa, Fiji and Australia – falls outside World Rugby’s international window, it means Gallagher Premiership-based players will not be released for that fixture.

It is a scenario which sidelines more than half a dozen of Pivac’s 38-man Wales squad, including Gloucester wing Louis Rees-Zammit, Northampton fly-half Dan Biggar and Bath number eight Taulupe Faletau.

“The side we would have liked to have taken into this series is the side that won the Six Nations, but that is not possible,” Pivac said.

“So we reevaluate and we look at these matches as a great opportunity to broaden the depth with the World Cup in mind.

“Nothing changes in terms of the preparation and mindset. It is just some different players in the changing room.

Wales Have Something Unique In Christ Tshiunza . . . His Coaches All Agree On That

“You want to challenge yourself against the best. In terms of consistently the number one team in the world, the style of rugby they play and how we want to play, I think that will be the ultimate challenge for us.

“Things happen in sport. We will go into this game as huge underdogs, undoubtedly, and let’s just see how it pans out on the night.”

Wales are set to welcome a first capacity crowd at the Principality Stadium since February last year when New Zealand arrive in town.

And Pivac added: “The occasion, first and foremost, for these players and management is going to be huge.

“To have the best two teams in the world – the All Blacks, and then the Springboks a week later – challenges don’t get any bigger.

Wales’ uncapped player for the Autumn Internationals, Christ Tshiunza, says he brushed the call from Pivac aside this morning to make sure they got the win against Cardiff Uni. 😂😂 Amazing. pic.twitter.com/yQrBhWONxP

“If you are a player, I guess you’re looking at it thinking there is a huge opportunity for me to perform on this stage and put myself in a good position for selection further down the track.

“The reason for having this (New Zealand) game, I wholeheartedly agree with, is that we need funding. We are in the situation we are in.

“Without this funding it would be a lot tougher on clubs, players and the union to proceed the way we would like to.

“Out in the community, anyone we bump into, is so excited. Yes, they would like to see the full Six Nations champions squad playing the All Blacks, but I think everyone is just excited to get to the venue.

“The older players talk about it. I heard (Wales centre) Jonathan Davies said some time ago talking around how he couldn’t wait for the crowds to get back, and I think that’s the same for everyone – players, management and supporters.

“And for that fact alone, I can’t wait for the day to come. Having the crowd back will be magnificent.”

English Based and Unavailable for All Blacks game

Coming Back after 2 Years out