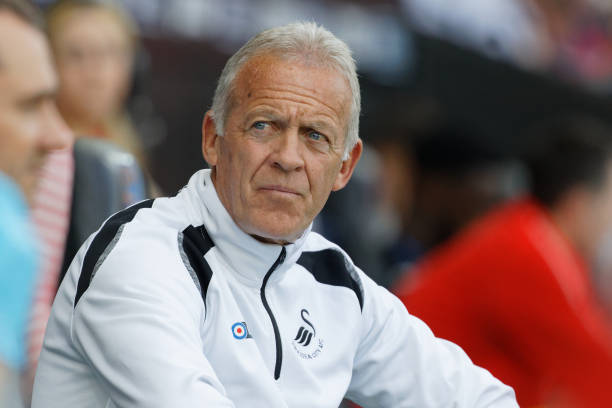 Alan Curtis has filled just about every role possible in a 50-year association with Swansea City, from goal-scoring legend, coach, caretaker manager, honorary president – and keeper of the kettle. That service earned him an MBE in the New Year’s Honours list. Owen Morgan, a lifelong fan of club and player, pays tribute for Dai Sport.

Alan Curtis once joked that the only reason he had lasted so long at Swansea City was that he was the only one who knew where the kettle was.

The real truth behind his longevity at the club is that he is the person – more than any other – who knows where the club’s heart is.

Curtis embodies the heart and soul of the club. He is the definition of what many would call the “Swansea Way”.

As a lifelong Swansea fan, who grew up watching Curtis weave his magic at the Vetch Field, I may be a little biased.

However, I am not alone in my admiration.

As the man known simply as “Legend” prepared to clock up his 50th year with the club he first joined as a schoolboy in 1971, he was recognised in the New Year’s Honours list.

Although best known for his association with Swansea, Curtis has quite rightly been honoured with an MBE for “services to Welsh football”.

When you consider all he has done for the Swans over the years, it is easy to forget that Curtis represented his country 35 times and played 150 matches for Cardiff City.

Considering the two South Wales clubs’ fierce rivalry, it is a measure of Curtis’ popularity that despite having earned legendary status at the Vetch, he was voted supporters’ player of the year by the Ninian Park faithful at the end of the 1986-87 season.

During his time at Cardiff, he even scored what he considers to be his best goal.

To earn that title among all his spectacular strikes for Swansea, Leeds and Southampton, this had to be some effort – and it was!

Like so many of the others, it was scored at the Vetch – in a Welsh Cup final against Wrexham.

Receiving the ball near half-way with nothing seemingly on, just like the best kid in the playground, he kept the ball at his feet, evading Wrexham challenges before unleashing a 25-yard left foot shot into the top right-hand corner at the Double Decker end.

If that was his best goal, then probably his most famous also came in front of the same Double Decker stand.

August 29, 1981 – a gloriously hot sunny, afternoon – saw me and 23,488 other fans packed into the Vetch to watch the Swans take on Leeds United in their first match in the top tier of English football.

Those of us draped in black and white that day were already delirious having watched the Swans build a 4-1 lead. In the 70th minute Curtis picked up the ball on the right-hand touchline.

Having listened to the away fans taunt him with chants of “Leeds reject” throughout the match, Curtis ran at the late England full-back Trevor Cherry.

As he cut in towards goal, Curtis produced a sidestep to turn Shane Williams green with envy, opening a gap for him to lash a perfectly placed shot into the same top corner he would find seven years later for Cardiff.

It really was one of those moments where you wanted to pinch yourself to make sure you weren’t dreaming.

Swansea City 5 – Leeds United 1, in the First Division, and Alan Curtis had scored a dream goal against the team who had lured him away a couple of season’s earlier! Life really didn’t get much better for a 14-year-old Swans fan.

He was already a hero, but his recollection of the goal afterwards brought him legendary status in my eyes.

“If the gates had been opened they would not have caught me. I would have been halfway down Mumbles Road,” said Curtis.

It was exactly how I wanted him to feel about scoring one of the greatest goals in Swansea’s history – sheer joy at conjuring such a magical strike for the club he had joined a decade earlier.

I first saw Curtis play when I was 11, in a low-key fourth division match against Bournemouth in the 1977/78 season – his most prolific goal-scoring campaign, when he netted 32 times in 39 league matches, helping fire the Swans to promotion.

It wasn’t just the number of goals that made him a favourite, but the style and flair with which he played.

He had wonderful close control which allowed him to dribble past players, but also used his body to feint and swerve past opponents – a drop of shoulder here, a side-step there, and he was gone.

Nineteen more league goals the following season saw the Swans promoted again, and the inevitable happened – the big boys came calling and Curtis was sold to Leeds United for a record £350,000 in May 1979.

His time at Leeds started well, scoring twice on his league debut against Bristol City and winning Match of the Day’s Goal of the Month competition with a brilliant individual effort against Southampton.

But a collision with Nottingham Forest’s Peter Shilton in a New Year’s fixture put his career in doubt, let alone my hopes of a return to Swansea.

Happily, he recovered from the injury and in some ways it may have speeded up his return to South Wales – just 18 months after he left.

And he picked up exactly where he left off, scoring the winner on his debut against Watford as the Swans continued their charge towards the First Division.

Having arrived in the top flight with such a bang against Leeds, the Swans, and Curtis in particular, carried on as they started.

The Rhondda product scored several truly memorable goals during that season, including a perfectly placed curling shot past Ipswich’s Paul Cooper from the edge of the area at Portman Road and another goal of the month winner against Southampton at the Vetch.

There was also a brilliant individual goal in a 2-0 home league win over Liverpool, when Leighton James also scored with a blistering free-kick.

But Curtis isn’t just known as “Legend” for his exploits on the field. He has filled just about every position at Swansea, doing so with the air of a perfect ambassador for the club where he is now honorary president.

One of his most influential moments after hanging up his boots came as the Swans prepared for that fateful match against Hull City in 2003.

James Thomas will always be feted for scoring the all-important hat-trick to preserve Swansea’s league status, but passionate clubman Curtis’s inspirational speech before the game has been praised by several players who took the field that day.

Curtis left them in no doubt about the importance of the game to the club, the fans and the city.

Had it not been for that victory, the Swans’ seven-year stay in the Premier League, the League Cup triumph and subsequent European campaign would literally have been the stuff of dreams.

Curtis has been involved in just about every significant occasion in the modern history of the club.

All fantastic occasions when Curtis has been influential as a player or member of the off-field staff. But he has also been there in darker times when the club has needed him most.

When Curtis stepped in as caretaker manager during Swansea’s Premier League stay, it wasn’t the first time he had taken the role when the club needed someone it could trust to calm nerves and steady the ship.

When Jan Molby left the club in 1997 Curtis took the managerial reins and he repeated that role in 2004 following the departure of Brian Flynn.

The proud Welshman has even managed to bring some joy to fans during the past six months.

With supporters having to watch matches from afar due to the COVID-19 pandemic, Curtis has been one of the summarisers for Swans TV alongside other club idols such as Lee Trundle and Wyndham Evans.
Their passion for the Swans crackled through the airwaves.

As well as the “ooohs” and “ahhhs” and shouts of “clear it” . . . especially from former defender Evans, fans have been treated to nuggets of football wisdom that can only come from ex-professional players.

There have been moments of absolutely comedy gold when commentator Anthony O’Connell asked Evans what he thought of handshakes being replaced by “elbow bumps” due to the threat of coronavirus infection between players.

Quick as a flash Curtis pointed out the tough-as-teak full-back used to dish out his own uninvited version of “elbow bumps” at regular intervals during matches!

Asked about the introduction of water breaks at the mid-point in each half when football resumed last summer, both players pointed out that the only hydration they were afforded in their day was a half-time and full-time cup of tea “with about 14 sugars”, closely followed by “the first pint of the night”.

It has been like watching matches in the pub with your Swans supporting mates . . . but mates who were actual bona fide Swans heroes.

All of which has helped further enhance Curtis’ already long established reputation as one of the nicest and most humble men in football.

One of my favourite Curtis quotes, which sums up his modesty and humour, came from his association with Swansea and Cardiff.
“I remember being booed by both ends of the ground in one derby game,” recalled Curtis with that trademark smile and twinkle in his eyes.

No one is booing now.

There’s a saying that you should never meet your heroes in case they disappoint you.

I can’t imagine many admirers who have met Alan Curtis being disappointed.

As much a gentleman off the pitch as he was a great player on it.