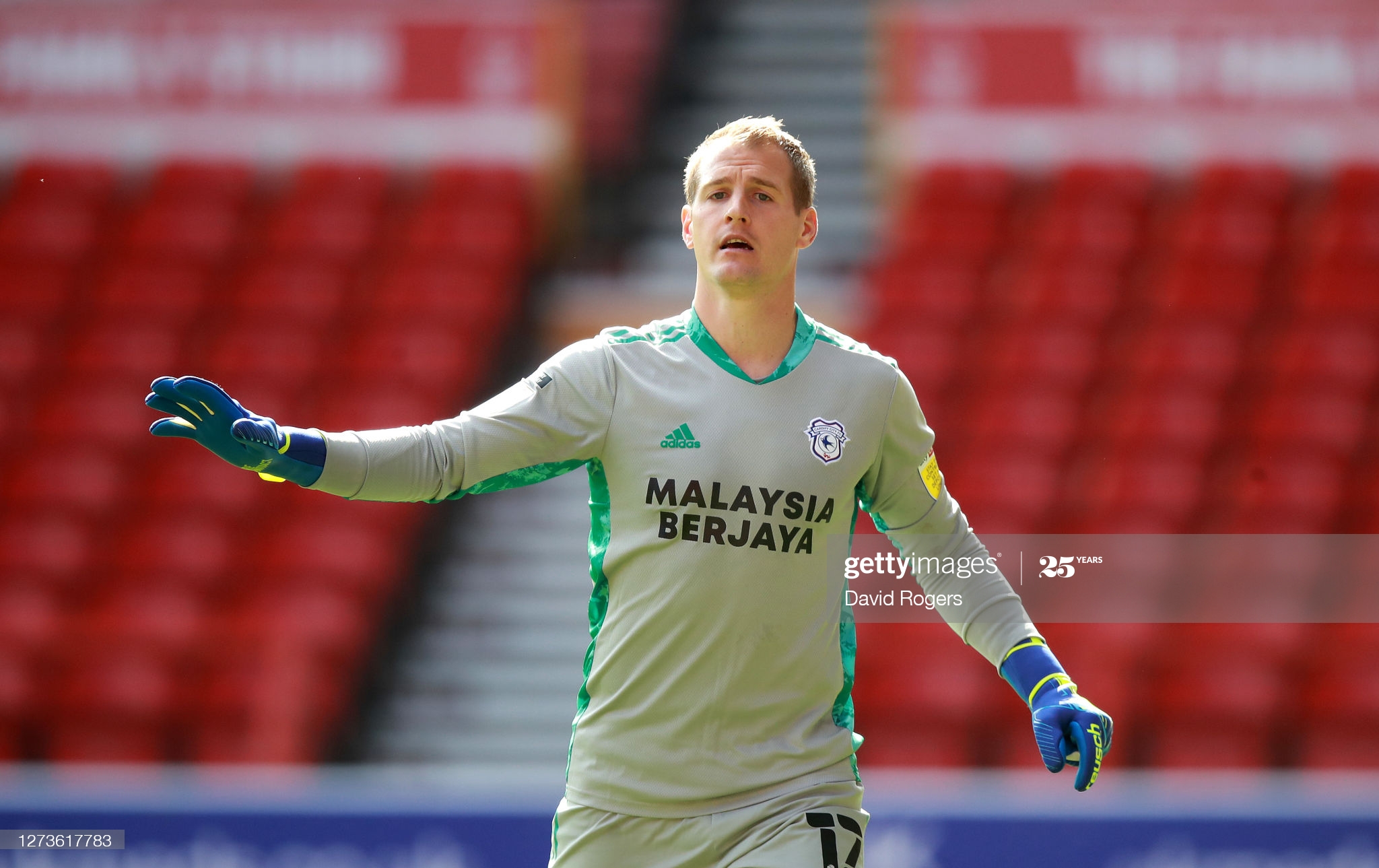 Alex Smithies has proved he is one of best keepers in the Championship. Pic: David Rogers/Getty Images)

Cardiff City keeper Alex Smithies admits even he didn’t know how he pulled off one of the saves of the season.

The Bluebirds stopper’s stunning effort to deny Bournemouth’s Dominic Solanke proved crucial, flinging out a hand to push his point-blank effort onto the bar.

City were trailing 1-0 at the time but soon after Harry Wilson got his first goal for the club with the vital equaliser to give Neil Harris’s side their first home point of the campaign.

“I wondered how I’d saved it immediately after because I just threw an arm out and thankfully the crossbar helped me out and the ball stayed out,” said the 30-year-old.

“I thought it was a really important save. It’s always nice to make a save like that and have some sort of impact on the game and then we went on to score shortly after.”

Smithies, who Harris reckons is one of the best keepers in the Championship,  gives huge praise for his current form to goalkeeper coach Andy Dibble.

The former wales International has been at the club since 2017.

“We have a fantastic relationship, Dibbs seems to know everyone in Cardiff as when you’re walking around the stadium he’s always waving at people in the crowd.

“He must need 100 tickets every game because he seems to know everyone. Everyone knows what a great guy he is, and we have a fantastic relationship.

“I know how pleased he was for me when I made the save because obviously, we spend a lot of time at looking at what we can improve.”

When Smithies signed with City in 2018 he was No 2 to Neil Etheridge whose form helped the Bluebirds get to the premier league under former manager Neil Warnock.

“In the first season Neil did really well he started the season and helped win promotion and I was perfectly fine with that,” he added.

“I had no arguments then but when I had a little run in the team perhaps, I was a little bit disappointed, but Neil was Warnock’s man and sometimes that’s the way it goes he was such a fantastic goalkeeper for this club.”

With the departure of Warnock after City were relegated back into the Championship, Smithies felt he had a fresh start in claiming that number one keeper position.

“It was a fresh start for me because neither me nor Etheridge had worked closely with the new gaffer and I was aware that Neil Harris obviously knew who I was and what I was about.

“It was a fresh start just to show him what I was about.”

Many fans believe with the departure of Etheridge – who has joined Birmingham City – and his recent performance that Smithies is now the nailed on number one at the club despite the arrival of Dillon Phillips on deadline day and Joe Day also an option.

But the former QPR and Huddersfield Town stopper believes he cannot afford to be complacent.

“I think you can be very comfortable thinking like that, and I think that’s a dangerous place to be so I never allow myself to be too comfortable in my position,” added Smithies.

“We’ve got some excellent goalkeepers at the club especially with the addition of Dillon and I think it’s a dangerous place to be as a goalkeeper.

“He (Dillon) seems a fantastic goalkeeper and a fantastic character and a really nice lad.

“I think I will enjoy working with him and I think we will both enjoy the challenge of pushing each other and I’ve certainly got to be on my toes but that’s not taking away from Joe because I think the exact same of him.

Smithies focus now is on Saturday’s visiting of Warnock and Middlesbrough as City look to build some momentum and move up the table.

“I think if we can win the game, we can come out of this week looking at it really positively because seven points out of nine would be a great return.

“Some of us don’t like to admit it but we did have a little hangover from the play-offs.

“It was difficult to get over it as much and as you try to move on quickly it’s not always possible. It’s sometimes human nature to be disappointed.

“I think that definitely showed in the two home games and although we didn’t win the other night, I think the gaffer said it as well. A point at home gets you up and running and we’ll go into the game more confident.”