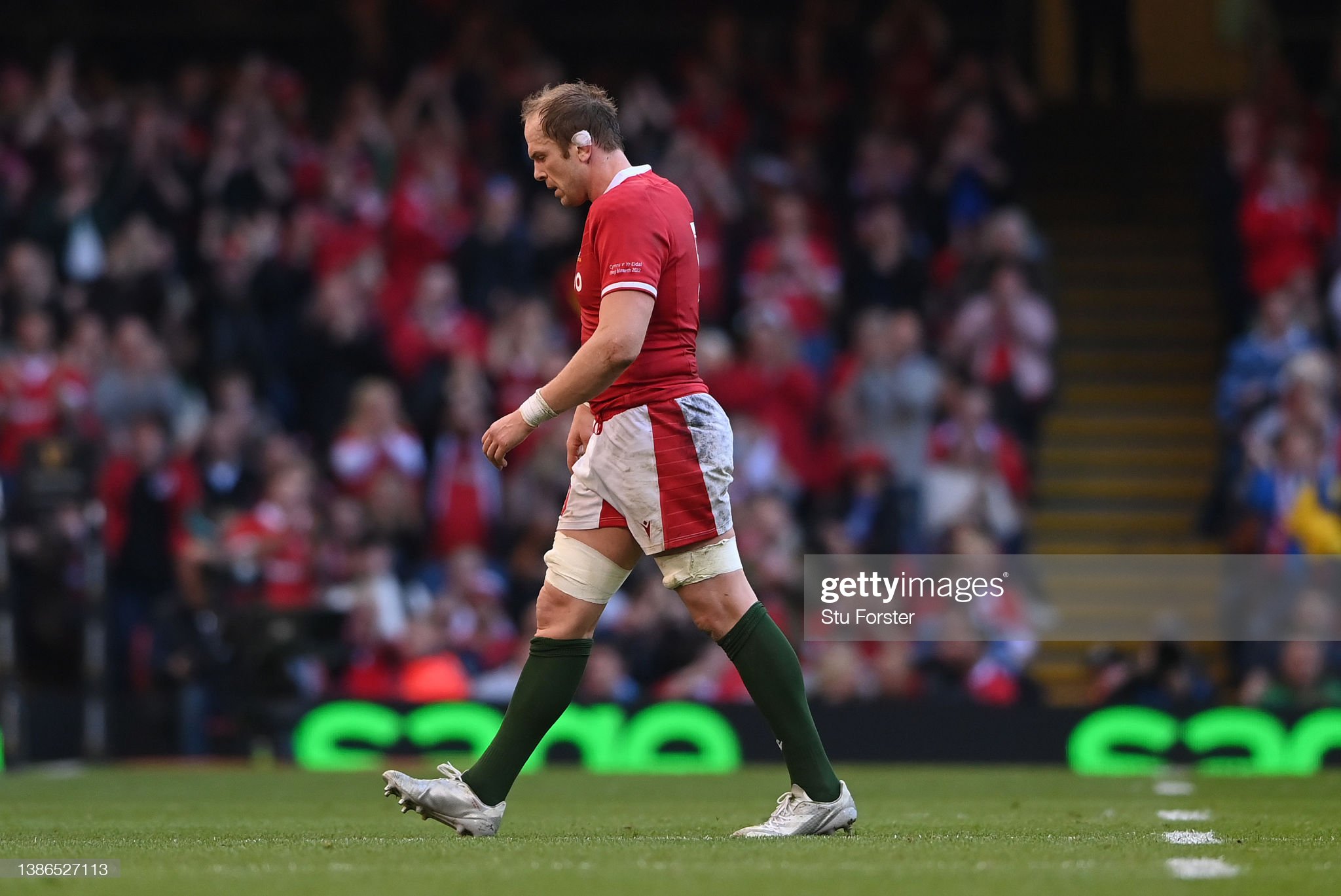 Alun Wyn Jones leaves the field after being replaced on his 150th cap. Pic: Getty Images.

Alun Wyn Jones reckons some Welsh players have been saddled for the final time and are about to be put out to grass – but the old warhorse doesn’t plan to be one of them.

Jones may be the oldest player in the squad and injuries over the past two seasons have disrupted his career, but he appears determined to continue.

The 36-year-old’s landmark 150th cap for his country turned into a nightmare on Saturday as Italy won in Cardiff for the first time to scratch a seven-year losing itch in the Six Nations.

Dan Biggar – who won his 100th cap – claimed afterwards that some teammates had used up their final selection chance and Jones agrees that coach Wayne Pivac is about to get busy sharpening an axe.

But even though Jones will turn 38 during next year’s World Cup in France, he has no intention of being one of those now chopped from the squad.

Wales – whose title defence turned into a fifth-placed finish – face world champions South Africa on tour this summer and Jones admitted: “It will be interesting to see what happens in the summer.

“Wayne has been pretty candid up to this point in the amount of changes he has made.

“I am sure he is going to draw a line in the sand going forward and select a squad that is building towards the World Cup.

Alun Wyn Jones is a Wales legend and special captain, but 150 caps and the end of Six Nations seems right time to go | @delmeparfitt https://t.co/tQhWLhckSx

“We are just 18 months out, so I assume he is going to shave the squad down to people he wants to work with.

“But we can’t be too brazen with that, because we are a small player base. You always have to be conscious of that.

“I have had a plan to get to this point. Because I have been injured, I probably need to adjust that and see what happens this summer.”

The original plan for the Lions skipper was that he would put his feet up in June and rest his ageing bones.

But the fact that this was his first match for four months because of a shoulder injury, means he now wants to go nose-to-nose with the Springboks for a second successive summer.

“It depends whether Wayne wants to take me or not and the relationship between the region and Wales,” added the Ospreys second row.

“If the plan needs to change, I’m sure it will.”

As for his own fitness, he added: “I felt pretty good. I’m sure some people will disagree with that, but I’ll have to have a good look to be more precise about my self-critique.”

Why are Northern Hemisphere fans so aggressive on facebook if you tell them that Alun Wyn Jones had far less talent that Geo Cronje and that only Wales would cap him 150 times?

Is there no place left for truth in this world?

Jones is still valued by Pivac for his contribution as well as his influence and will survive any immediate cull.

But others – such as Johnny McNicholl, Gareth Davies, Willis Halaholo and Dillon Lewis – could find the World Cup road has reached an early exit.

Jones added: “It’s inevitable there will be criticism. That’s what comes with professional rugby in Wales.

“Things can definitely get better. I won’t pull any punches on that. Over the past 12 months, there has been a big thing about giving opportunities to players and getting strength in depth.

“A great number of caps have been awarded, so the melting pot of players is larger. It’s now up to Wayne to get a squad of players to go on the park.

“We won a Championship last year, but that seems to be forgotten pretty quickly. When we were on a for a Grand Slam, we were termed the worst Grand Slam team, ever.

“Admittedly, we didn’t win it, but there is a belief in this player group both individually and collectively.”

Italy looked all booked in for another brave defeat when the goal-kicking of Paolo Garbisi and Edoardo Padovani left them 21-15 behind after Welsh tries from Owen Watkin, Dewi Lake and Josh Adams.

But then young full-back Ange Capuozzo showed why people are comparing him to Welsh great Shane Williams as he dazzlingly set up Padovani for a last-ditch try.

“There was a lot of emotion. Marius Goosen, our defence coach has been there six years and won his first Six Nations game. You’d think we’d won the World Cup!

“But we have to build on this. It cannot be just a one-off.”