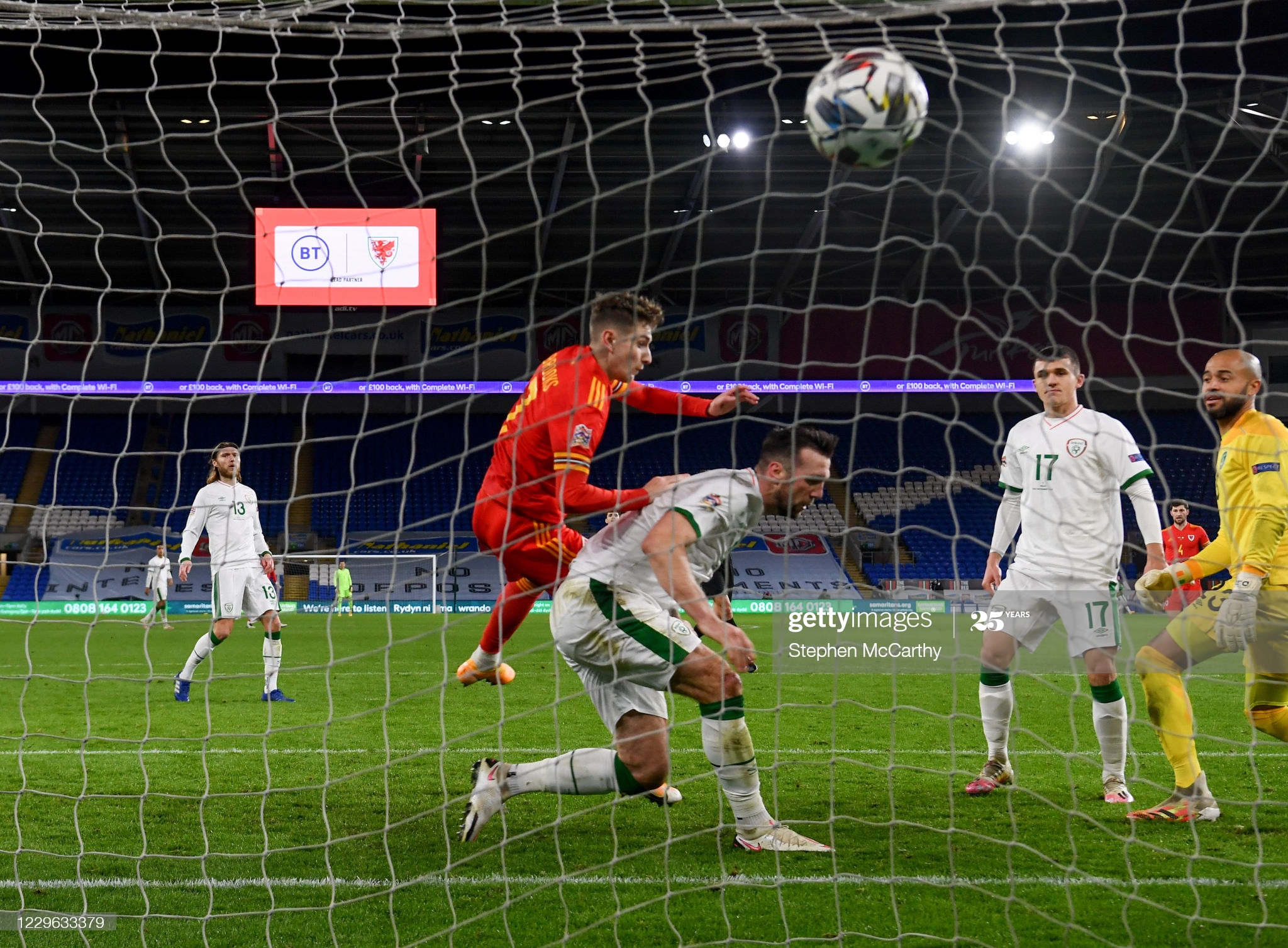 David Brooks scores the only goal of the game for Wales against the Republic of Ireland. Pic: Getty Images.

Robert Page paid tribute to his gritty Wales team after a David Brooks goal cemented their position at the top of their Nations League group and underlined their status as a national side others would now rather avoid.

This was Wales’ fourth 1-0 in Group B4 and the fact they did not concede again means they have now gone 700 minutes without giving up a goal in competitive football.

Brooks headed home from close range after 66 minutes to maintain Wales’ one-point lead over Finland – 2-1 winners in Bulgaria – before the two teams meet in their final Group B4 fixture in Cardiff on Wednesday.

Assistant coach Page – in charge while Ryan Giggs stands aside following his recent arrest – left Kieffer Moore out of the starting line-up, but when the big striker was sent on, Wales’ greater threat in the air eventually brought Brooks’ goal.

“You have to take the positive and that’s to be flexible – you can have different ways of winning,” said Page.

“We’ve always had a plan B in there. So if things aren’t quite going your way or for whatever reason, the game’s not going as planned, we always have a plan B written down. And that was the case again today.

“The boys worked hard for it right throughout the side. It’s not just about the back four, or back five, and then the goalkeeper. That’s as a unit, from front to back.

“They’re well organised. They’re hard working, and hard to break down, They rode their luck a couple of times today, but it’s not always going to go your way.

“The lads deserve a lot of credit for their work rate. So yeah, that’s definitely a positive aspect from tonight.

“I think we gave the ball away cheaply in the first half. It was very frustrating and I said that to the players at half-time.

“We caused ourselves more problems than Ireland if I’m being honest.

“We invited pressure into our box and we gave cheap free-kicks away. That disappointed us a little bit.

“We decided to change the shape late on and it worked for us. We’ll take the clean sheet, the three points and look forward to a big game on Wednesday.”

Page also gave credit to the power and athleticism of Gareth Bale, whose headed pass enabled Brooks to score.

“He is so athletic. There were not many people on that pitch tonight would have got their head to that cross to keep that ball alive and put it back into that area.

“Everybody recognises him for his pace and for his left foot, which can be like a wand, and his free kicks, but his athleticism and his heading ability is second to none.”

It was Wales’ fourth 1-0 win in the group and leaves Ireland – who had Jeff Hendrick sent off in stoppage time for denying Tyler Roberts a goalscoring opportunity – facing a relegation decider against Bulgaria in Dublin on Wednesday.

But Ireland might feel that Wales should have been reduced to 10 men after 37 minutes when Joe Morrell lashed out at Jayson Molumby.

Both men were booked in the incident but many referees may have chosen to show Morrell the red card instead of yellow for reacting to the Irishman’s shove on him with a petulant kick.

Moore’s first contribution was to be booked for what Czech Republic referee Petr Ardeleanu considered a dive in the Ireland penalty area, but Wales were ahead within a minute.

Brooks and Moore were denied by Darren Randolph in the closing stages, but Wales held on to keep a seventh successive clean sheet in competitive football to boost their Nations League promotion hopes.