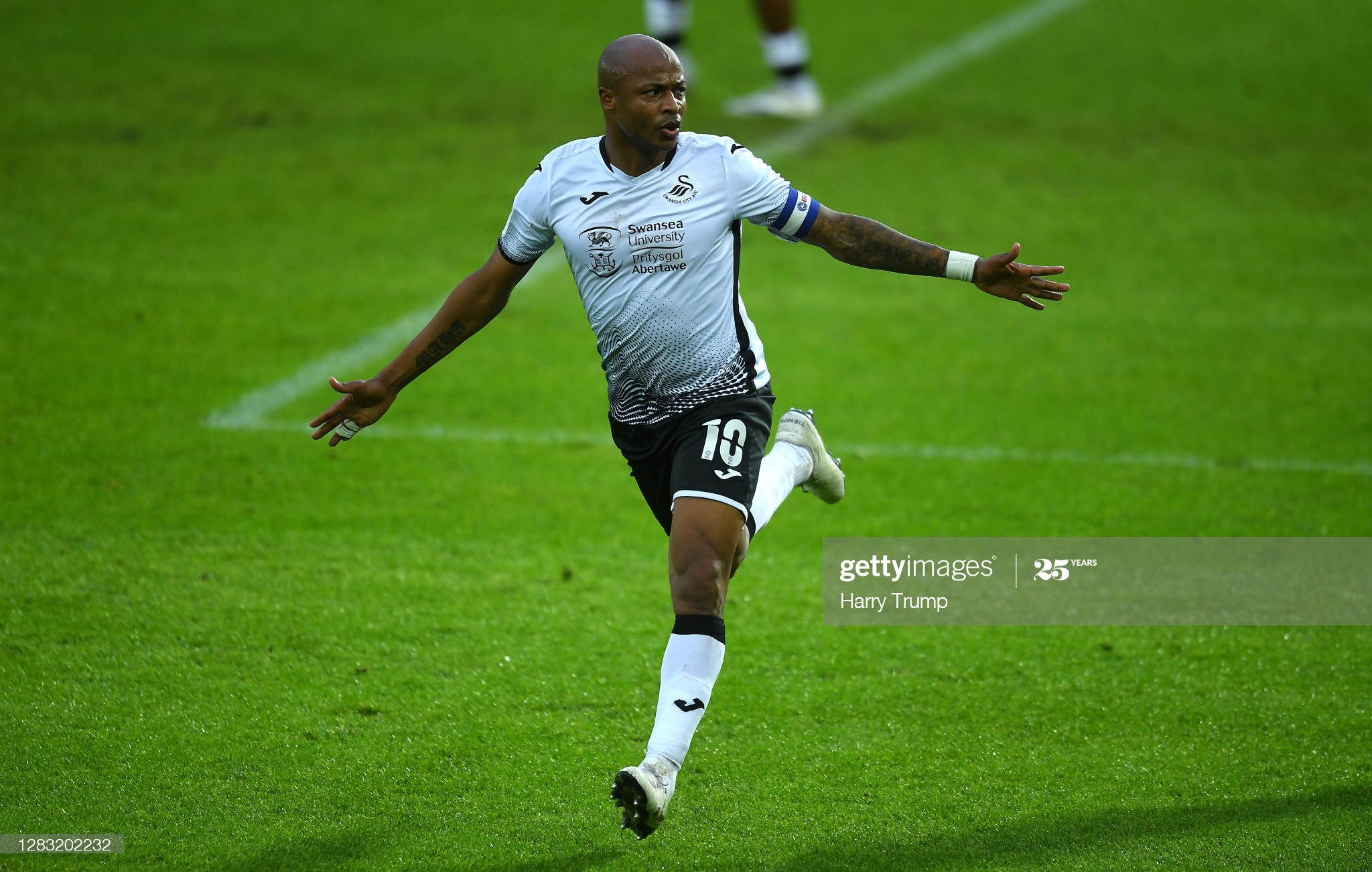 Andre Ayew will always be a threat in the Championship for Swansea City. Pic: Getty Images.

Andre Ayew insists Swansea City can smooth out the wrinkles from a bumpy few days by beating in-form Barnsley today at the Liberty Stadium.

The Swans appeared to be moving along smoothly after their 2-0 derby day victory at Cardiff City a week ago, which had them pushing hard on the heels of the top two in the Championship.

But a midweek 2-0 loss at struggling Derby County was followed by the news that the clubs intends to rip up their rapidly deteriorating pitch and install a brand new one after this weekend.

To do such a measure in mid-December could prove a gamble, but it was considered less damaging that persisting with the muddy surface that head coach Steve Cooper feared was hampering his side’s free-flowing football.

Ayew insists the Swans have the staying power to ride the ups and downs of a compressed season and said: “Overall, it’s been a decent start, but that’s all that it is so far.

“There are so many games to play, even within the space of a week the table can change so much, but that’s the nature of the Championship and it’s what we have to deal with given the congested fixture list due to Covid.

Swansea City And Ghana Hero Andre Ayew Is Happy To Make Others Jealous . . . But Says Most African Stars Have Many Mouths To Feed https://t.co/CRtIM88flD via @Dai_Sport_

“I hope to bring my experience to help the team because, even though you will lose games, it is about how you handle those things.

“I think we have been good at that this season, we have to keep that going and make sure there are more good things than bad.”

This will be Swansea’s ninth game in 28 days since the last international break, with that sequence coming on the back of another long run of consecutive midweek and weekend fixtures.

That form has moved them away from the relegation zone and another victory over the Swans would lift them to the fringe of the play-off places.

“We know Barnsley have had some good wins, and won a lot of games since the change of manager,” said Cooper.

“They have a lot of young players looking to play on the front foot and they have had good returns from that.

“They’ve had an extra day of rest than us, that’s the fourth time for us in this schedule. We have yet to have an extra day’s rest ourselves, but we won’t use that as an excuse although it is an important part of things.

“But we have to be ready as they are an energetic side, and we have to try and match that while putting our stamp on it.

“We will also be focusing on what we do and trying to make sure that is the most important factor in the game.”

Swansea will again be without Morgan Gibbs-White and George Byers, but have no new injury concerns following the midweek defeat at Derby.

Tivonge Rushesha is a long-term absentee after suffering an ACL injury in training.