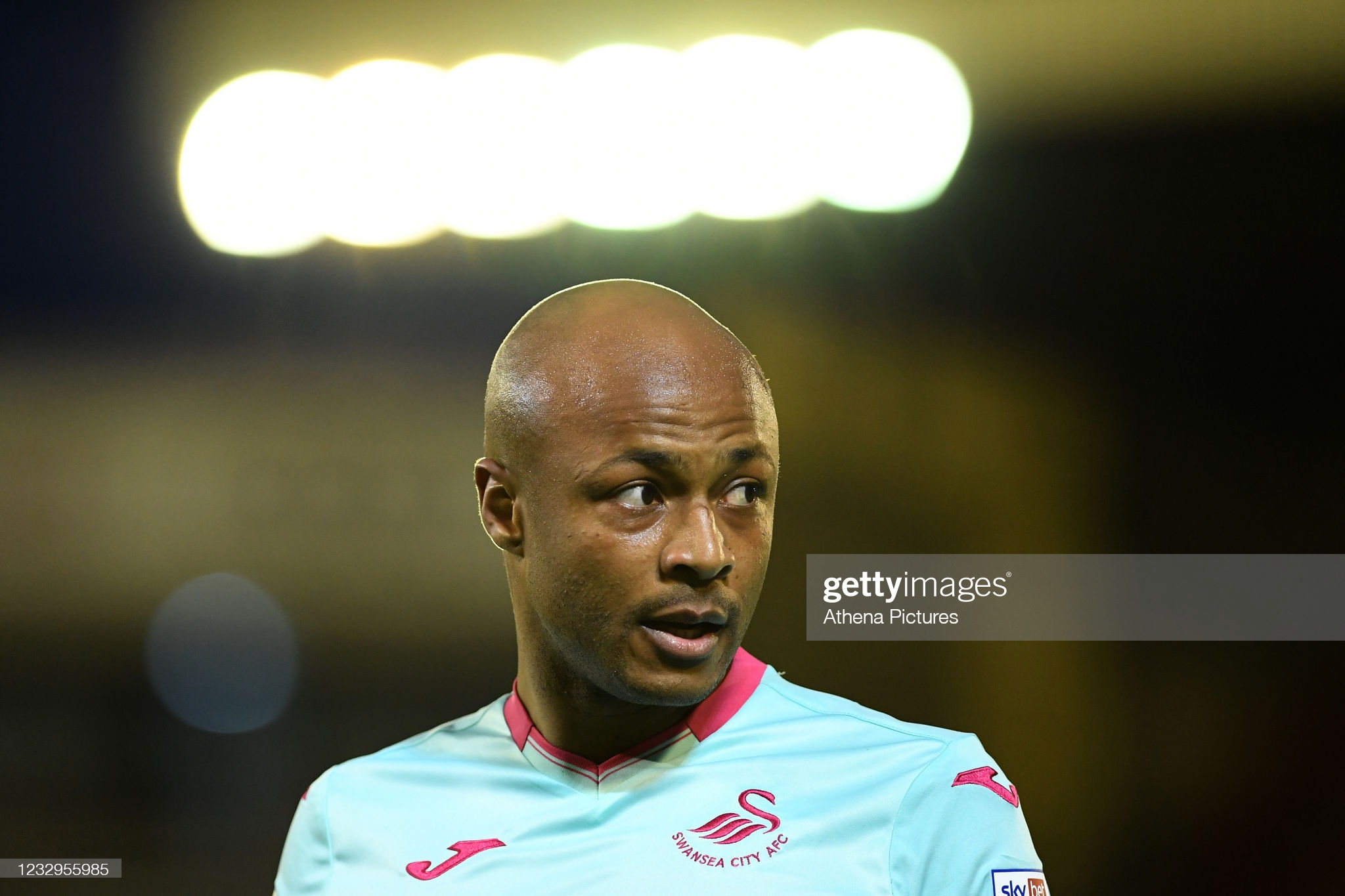 Andre Ayew has now played 139 matches for Swansea City and scored 47 goals, the latest being a vital one that tipped the play-off semi-final against Barnsley in his club’s favour. His talent does not come cheap, but it’s as much about his influence and resourcefulness that impresses Fraser Watson.

With 39 minutes on the clock, Kyle Naughton’s threaded pass found Andre Ayew on the right edge of the penalty area.

From there, Swansea fans knew what was coming. Barnsley defenders Mads Andersen and Michal Helik knew it, too.

As did home keeper Bradley Collins. But such was the quality of the execution – the faint, the glide onto the favoured left foot, the precise far corner finish – that envisaging the obvious didn’t amount to stopping it.

The bland, pragmatic overview is that the strike gave Steve Cooper’s side a slender lead heading into the second leg of their Championship promotion play-off at the Liberty Stadium this Saturday.

Delving deeper, the goal was a synopsis of Ayew elevating Swansea’s season – a moment of Premiership quality to settle a contest that otherwise encapsulated all the stereotypical portrayals of a frenzied, route one dominated, up-and-at-em’ type Championship battle.

Indeed, the third chapter of the Ghanaian’s time in South Wales remains on course to dismiss the hostility that masked the previous two.

There was the colourful arrival in 2015, the debut goal against Chelsea, the header to help beat Manchester United, the free kick past Joe Hart that rounded off a 12-goal debut season.

All that culminated the following summer with an acrimonious exit as West Ham came calling.

Then, a year and a half later, came the ill-fated return. An £18 million mid-season transfer fee born out of desperation overriding logic.

When defeat to Southampton in the penultimate game of the season all but sealed relegation, no sooner was Ayew down the tunnel than he was speeding away from the stadium.

And then came the renaissance. From being on loan at Fenerbahce, one could have been forgiven for not realising he was still on the club’s books when he rocked up for a league cup tie with Northampton Town in August 2019.

Two goals off the bench that night seemingly represented timely publicity before the transfer window closed.

ANDRE AYEW GOAL AGAINST BARNSLEY IN THE 1ST LEG OF THE CHAMPIONSHIP SEMIS. https://t.co/zJHjSw7E2v via @YouTube #WontumiSports

On the contrary, it proved the catalyst for the most unlikely of redemption stories.

Ayew’s contribution these past two campaigns has extended beyond occasional brilliance and a handful of nerveless late penalties.

Work rate, desire, leadership – a willingness to defend as well as attack – all have characterised a figure so imperative to his side that even now his absence in the second leg or potential final would appear too big a blow to overcome.

Cynics may point out that financially, he’s no martyr. He remains the one squad member still on a Premiership style contract, and his wages that reportedly exceed £80,000 a week represent true distortion in comparison to teammates.

Keeping him on the wage bill, has undoubtedly meant others coming off it.

And for good measure, opposition coaches and players could, or in many cases have, sneer about the simulation and shrieks of feigned agony that empty, echoing, stadiums have not served well.

But for the tilt at promotion to remain a reality, Cooper knew he needed him.

And a refusal to go through motions and shrug shoulders at a level arguably beneath his talent, or simply focus on an international career that now nears 100 caps, has all been underpinned by a burning desire to help his club back into the top flight.

Not only has this second return rejuvenated Ayew the player, but after a messy period of botched moves and accusations of greed, it’s resurrected Ayew the man.

Saturday’s second leg is shaping up to be tight again. A final against Brentford or Bournemouth at Wembley, tougher still.

And if Cooper’s side are to prevail in both, a scenario that remains anything but simple, you’d expect his key performer’s class and tenacity to be at the heart of it.

The first chapter of Ayew and Swansea ended in him being labelled a mercenary.

The second, he exited as a supposed flop.

The third, however, may yet see him written into Swansea folklore forever.