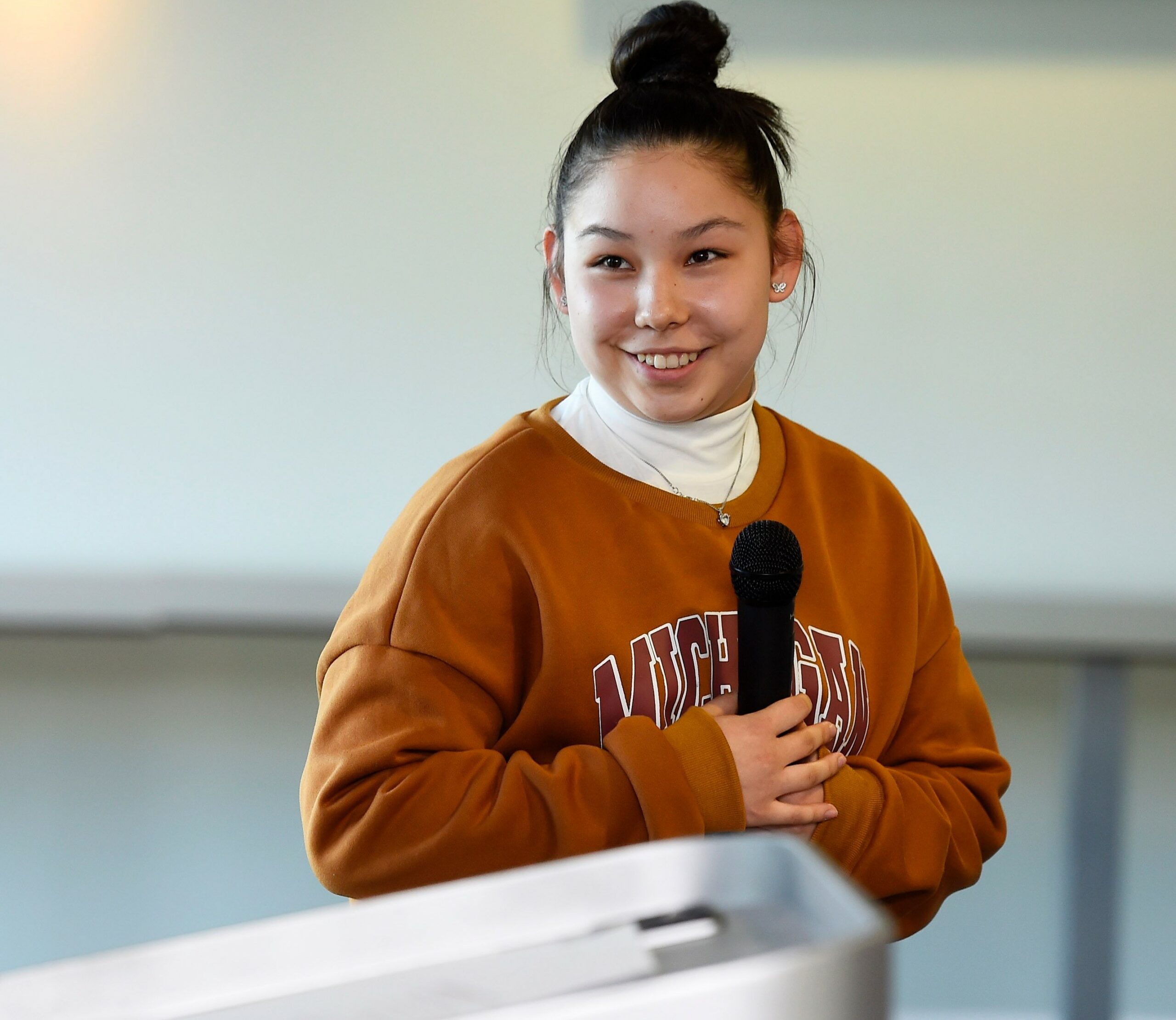 Anna Hursey celebrated being called up for her second Commonwealth Games by winning funding from the Charitable Social Enterprise GLL Sports Foundation.

Hursey, who became Wales’ youngest ever Commonwealth Games athlete four years ago at the Gold Coast Games at the age of 11, has now been named in the 2022 Table Tennis squad.

Hursey won her award at the GLL Sport Foundation event which took place at Sophia Gardens. She has also been named as one of three GLL ambassadors alongside Wales women’s rugby’s Elinor Snowsill and Para-rower Benjamin Pritchard.

The award is part of an overall package of £36,000 fund given to 64 talented young athletes to support their training.

Hursey, now 15, is an experienced athlete in her field, but the support received is crucial for her to continue to compete at the top. Speaking of her happiness of receiving the award and becoming an ambassador for GLL Sports Foundation she said: “I am really happy to get this award. A lot of hard work has gone into training, and this helps a lot. There’s a lot of travelling and playing different countries and I am just enjoying playing table tennis so much.

“Becoming an ambassador has given me a lot of pride and it is important to help inspire other people. It has been great to get support to help me continue to improve and I am excited about what is coming next.

“The last two years have been difficult during Covid, but I competed recently in Portugal and hopefully I will be able to improve my training now and be ready for the Commonwealth Games in Birmingham.”

The Cardiff schoolgirl will be looking to taste more success at the 2022 Birmingham Commonwealth games after being selected for the Welsh team.

Rhian Pearce, Chief executive of Table Tennis Wales said, “Well done to all the players that have been selected and we feel that this is a really strong team that could really perform and improve on our finishing position from the 2018 Games. We are delighted that our Gold Coast team of Charlotte, Chloe and Anna will be reunited and will be joined by Lara, who has played outstandingly this year.”

The 2022 Commonwealth Games will feature more medals for women than men, with 136 opportunities to win a spot on the podium. Birmingham 2022 will have the largest female sports programme in history, which includes Women’s T20 Cricket for the first time.

Chris Jenkins, Commonwealth Games Wales CEO said: “Congratulations to all of the players and the support staff for once again producing a strong Table Tennis team. It’s great to see not only the talent they have as athletes, but the comradery they have as a sport. Preparations are going well for us, and we look forward to sharing further news on selected athletes over the next few weeks.”

Team Wales finished 7th at the last Games in Gold Coast 2018, and with a similar size team going into Birmingham, they are hoping to echo the success of 4 years ago.

The GLL Sport Foundation is committed to providing comprehensive support to young sports people. They aim to help local athletes through their training, with access to training facilities, sports science provisions and medical support.

Peter Bundey, Sport Foundation Chair said “These last 2 years since the arrival of the Covid-19 pandemic have had an unprecedented impact across sport especially with younger emerging talent.

“For young talented athletes, restrictions of their training, travel and competitions appear to have impacted significantly. But these awards offer a welcome boost for athletes to continue the richly diverse sports they love and excel in – allowing us to reach deep into communities across the UK to remove barriers to participation.

Welsh Rugby star Elinor Snowsill, is one of 112 talented young athletes from Cardiff who will benefit from a cumulative £44,800 worth of free gym and swim memberships – thanks to GLL Sport Foundation funding from our partners at social enterprise @Better_Cardiff pic.twitter.com/76JFdYCPq4

“Since the Foundation began, we have now given nearly 20,000 athlete awards, totalling nearly £13million of support. I would like to give heartfelt thank all our sponsors, partners and supporters, who remain the lifeblood of this fantastic GLL initiative. I would also like to thank SportsAid for their continued partnership and the athletes who have continued to support us over the last two years and look forward to being with you for years to come”.

“We are delighted to play our part in supporting the development of sporting talent across the city where GLL operates sports and leisure facilities. The GLL Sport Foundation keeps local communities’ sporting dreams alive after pandemic hiatus and through the cost-of-living crisis.”

The Table Tennis and Para Table Tennis event will be held at Birmingham’s NEC from the first day of competitions on July 29th 2022.

It's a respectable fifth for Welsh rower Benjamin Pritchard at his first #Paralympics.

The 29-year-old was less than four seconds off a medal in the final of the PR1 men's single sculls. pic.twitter.com/mGCmXO7EFd

Check out Dai Sport next week for an in depth interview with Anna Hursey.