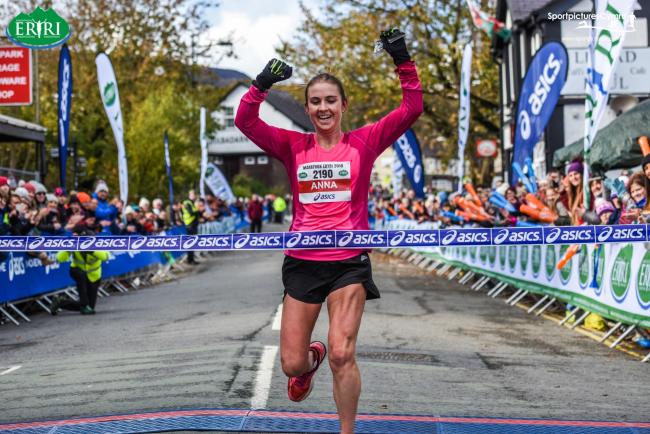 Anna Bracegirdle will be back to defend her Snowdonia Marathon title this year – thanks her to friend’s quick thinking.

Bracegirdle – the laidback, non-club athlete who stormed to a dramatic victory in the women’s race in 2018 – had not even got around to making her entry for this year’s event as she mulled over her next move.

Thankfully, a mate did the admin work for her and so the 26-year-old will be back to try and repeat her stunning victory of 12 months ago in one of the toughest, but most breathtaking races on the UK marathon circuit.

Saturday’s race – highlights of which are on S4C at 6.00pm on Sunday – produced drama worthy of the backdrop last year as Bracegirdle came surging through the field in the final two miles to win the women’s race, after Russell Bentley had taken the men’s title.

“I didn’t actually enter myself this year, one of my friends entered for me,” admitted Bracegirdle, whose maiden marathon victory last year was achieved in a time of 3:05:33.

“Because I won last year, I actually wasn’t sure I wanted to run it again. But one for my friends entered on my behalf and I’m now glad they did. I wouldn’t have wanted to miss it.

“It’s pretty hilly, but it’s a lovely route. This will be my third marathon of the year, but it’s definitely my favourite.”

The demanding 26.2 mile (42km) course includes 2,750ft (838m) of climbs, including the Llanberis Pass – as well as some trail track to go with the tarmac – and is not for the faint-hearted.

In addition to the Pen y Pass, there’s a two-mile downhill farm track section, a steady climb to Beddgelert and then another to Bwlch y Groes, before a downhill finish into Llanberis.

But that didn’t stop Anglesey-born Bracegirdle from storming to victory after only entering because it had been a Christmas present from her sister.

Bracegirdle is a rare thing in women’s distance running – a sub three-hour marathon runner who is neither a member of a club, or even has a coach.

Snowdonia this year will be only her fifth marathon in total – last year’s was only her second – but she already has a personal best of 2:52: 39, run at the Greater Manchester Marathon in April.

“I haven’t run for a club, or even trained with one, for about 13 years,” says the Liverpool-based radiographer.

“I just like to run by myself. I quite like training on my own, although I will sometimes also run with other people.

“I don’t have a coach, either. It’s not really my motivation to win races. I just get a buzz from doing it and never feel that competitive about things.”

Bracegirdle actually spent most of last year’s race chatting with other runners before suddenly realising most of them were struggling to keep pace with her.

“I was just enjoying myself and then noticed that people were shouting out that my place in the race was getting higher and higher.

“I’m not normally a very competitive person, but it just felt like brilliant fun. I had chatted with people most of the way around and made lots of friends on the course who I’m going to see again this year.

“Last year was actually just an excuse to get together with friends and go home for the weekend.

“I knew I must have been fairly high up in the women’s race, but I didn’t actually know what position I was in.

“It was only in the last climb, when I passed a few other girls, and I felt quite strong, that I realised where I was. I’d rather not know where I am in the race, to be honest.

“People were shouting that I was in the lead, but it gets so noisy and you’re feeling so tired, that you tend to zone everything out and just concentrate on trying to run to the finish.

“But it was an amazing feeling at the end of the race to know that I’d won it.”

Newport runner Emma Wookey of Lliswerry Runners had led for 24 miles, but was eventually passed by Bracegirdle and had to settle for the runners-up spot.

Bentley, who runs for Kent AC, but who has also represented Wales at mountain running after re-locating to Beddgelert, will defend the men’s title he won last year in a time of 2:38:21.

Bentley, who has also run Ras y Wyddfa, says: “Snowdonia is an amazing race – so hard – but I absolutely love it.

“Your body feels burned, and in need of a good rest, but it’s totally worth it.”

Marathon Eryri 2019 – Highlights from the legendary race which takes runners along some of Snowdonia’s beautiful roads – 18.00 on Sunday 27 October. (S)