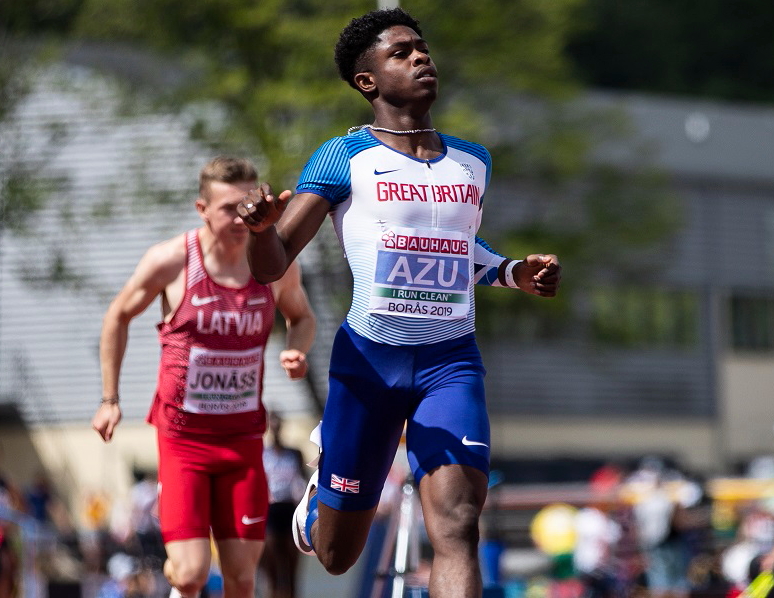 Cardiff's Jeremiah Azu had cruised through his rounds before being hit by a hamstring problem in final. Pic: Maja Hitij/Getty Images for European Athletics.

Jeremiah Azu’s bid to become European Under-20 100m champion ended in agony face down on the Ryavallen Athletics Stadium in Sweden on Friday night.

It was a heartbreaking end to the Cardiff athlete’s challenge following his stratospheric rise to prominence this year.

The 18-year-old was the red hot favourite going into the final in Boras, but pulled up sharply clutching his left hamstring as he led going into the closing stages of the race.

Azu, the fastest teenager in Europe this year having slashed his PB to 10.27, had eased through to the final as the fastest qualifier after winning his first round heat and semi-final comfortably.

And as he blasted out of the blocks it looked as if the final would be a formality as the Welshman reached the half-way mark clear of the field.

But between 60 and 70m metres Azu appeared to tighten up before grabbing his hamstring and collapsing onto the track short of the line.

As he lay on the track, unfancied Italian Lorenzo Paissan surged through the line to take the title in a time of 10.44.

Great Britain’s Chad Miller, who claimed the bronze, immediately returned to his stricken team-mate to console him.

Azu bravely managed to haul himself over the line to register a finish in a time of 13.45.

But he had appeared to have shaken the problem off with his impressive performances in the early rounds in Sweden.