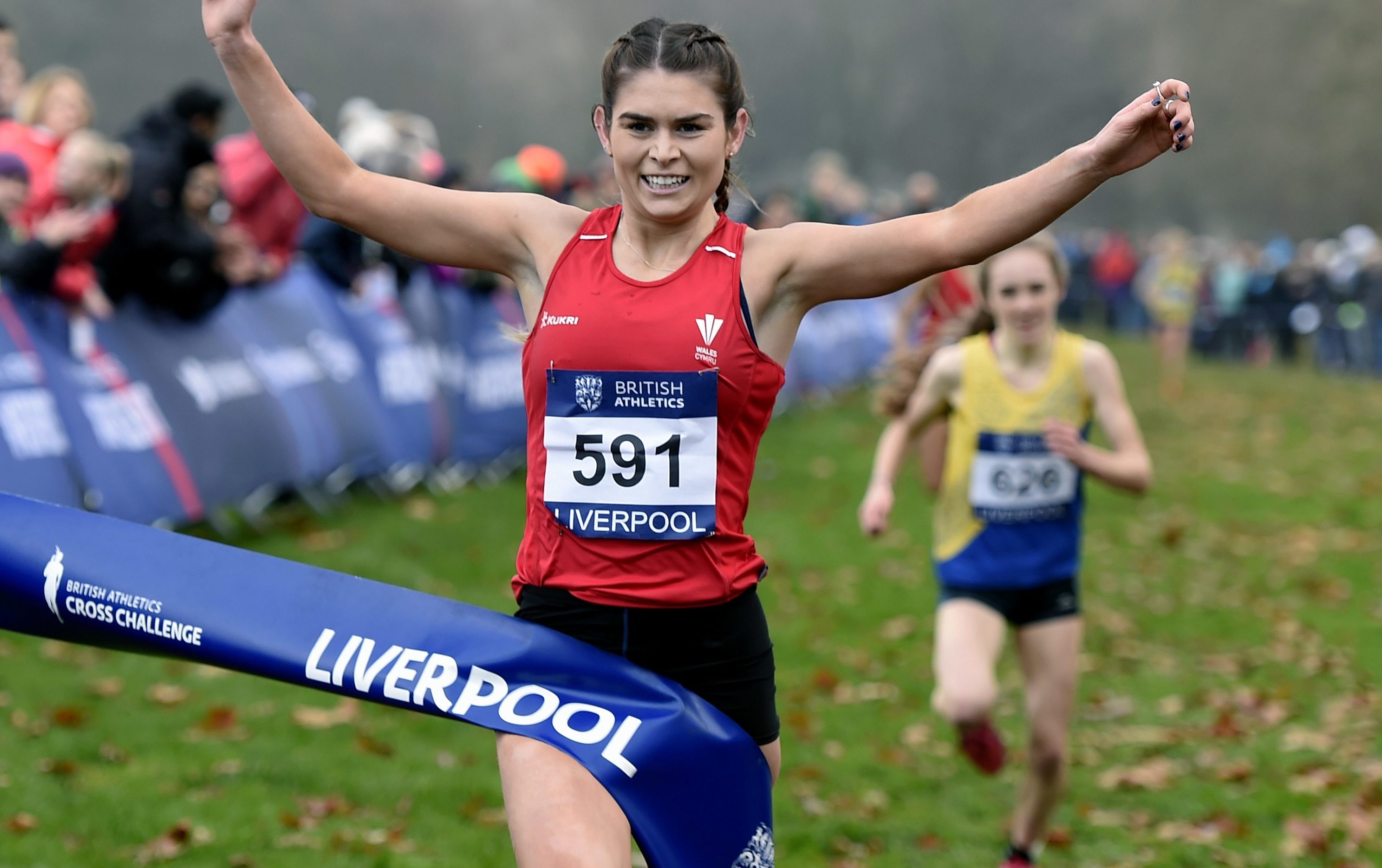 Cari Hughes after her v victory at the trials in Liverpool. Pic: Mark Shearman

Seven Welsh athletes are included in a formidable Great Britain team which travels to the Netherlands for the SPAR European Cross Country Championships on December 9.

The strong contingent is a result of last weekend’s impressive showing at the British Cross Challenge in Liverpool where Welsh athletes won an unprecedented three out of four trial races.

Following confirmation of the 40-strong Great Britain team, a delighted Arter said: “I want to finish as high as possible individually, but Great Britain have a rich history at the Championships, so it would be great to pick up a team medal and get on the podium too.”

Arter will be joined in the senior women’s team by Welsh Commonwealth Games 1500m bronze medallist Melissa Courtney, who finished fourth at Liverpool despite the race being her first cross country outing of the season.

Courtney has an excellent track record at the European Championships having been part of Britain’s gold medal winning senior mixed relay team at last year’s event.

Hughes is another of the Welsh athletes who enjoyed success at last year’s championships, helping GB to the junior women’s team gold by finishing ninth in the individual race despite suffering a fall.

The Great Britain senior men’s team in Tilburg will feature another Swansea Harrier  in the shape of Dewi Griffiths, along with Liverpool AC’s Charlie Hulson, who finished in fifth and fourth places respectively at the Sefton Park trials.

This will be Griffiths’ sixth European Cross Country Championships and the Llanfynydd farmer will be looking to banish the memory of last year’s event when he was forced to withdraw due to injury while leading the senior men’s race at the halfway stage.

Hulson, who won the Cardiff leg of the British Cross Challenge last month, will make his senior debut at the championships having previously competed at the European and World Cross Country Championships at under-23 level.

In the junior races, Heyward, whose win in Liverpool followed impressive victories in Cardiff and at an international event in Spain this season, says he has “unfinished business” at the European Championships.

One of the favourites for a medal in the Netherlands, the 19-year old said: “I feel I have a bit of unfinished business there just because last year I got ill before I went, so my performance didn’t really reflect the shape I was in. It’s my last year as a junior, so I hope to make it count.”

Heyward is joined in the junior men’s team by Matt Willis, who makes his second consecutive appearance at the European Championships after his 14th placed finish in the Junior Men’s race at Samorin, Slovakia last year.

The Wrexham AC man, who is also an outstanding international triathlete, earned his place in the team with fourth place in Liverpool, thanks to a stunning second half of the race which saw him gain over 15 places in the final few kilometres.

Commenting on the European Championship selections, a delighted Welsh Athletics National coach, Chris Jones said: “The performances at the weekend were outstanding. We expected Welsh athletes to secure places on the GB teams, but to get three individual wins was exceptional.

“I think all of our athletes can be scorers for their GB teams, and all the teams are looking strong as challengers for team medals.”

Jones will add to the Welsh flavour of the GB squad as the senior men’s team manager for  the Championships, meanwhile the senior women’s team also features Swansea Harriers’ English athlete Verity Ockenden.

The British team has enjoyed a rich vein of success at these championships, having topped the medal table in 11 of the previous 12 championships.

Team leader, Rob Denmark believes the team is strong enough to continue that record: “We have been fortunate enough to enjoy a great deal of success at these championships in recent years and I’m hoping that this year we will continue to challenge for individual and team medals.”

The full Great Britain team is: