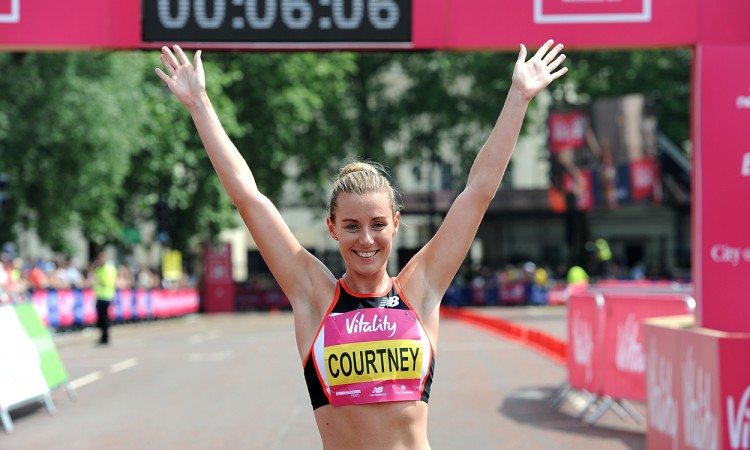 Courtney has just returned from a four week training camp in Arizona and is champing at the bit to get racing again.

The Poole AC athlete said: “I’m really looking forward to it, it’s exciting to go back after last year having won it, but I know it’s going to be really competitive.

“I’m looking forward to doing a shorter distance as well, although it’s going to feel very fast and short for me having been training for 5K.”

During her trip Stateside, Courtney was concentrating on honing her condition over 5K – the distance she hopes to contest at the World Championships in Doha later this year.

However, she feels Sunday’s mile in London is the ideal distance to return to competing having not raced since the indoor season when she won a bronze medal over 3,000m at the European Indoor Championships behind Laura Muir in March.

“It does feel like it’s been a long time, ” says Courtney, “although I did an indoor season, so it hasn’t really been that long.

“It just feels quite late in the year, but this is going to be a long season so we’re not rushing to compete. It’s a nice way to start the year, with a road mile, which is a little bit more relaxed, a little more laid back and quite a fun event. I really loved the atmosphere last year.

“I’d love to try and win it again, it’s a really good meet, and especially this year. Every year it gets bigger and bigger and after last year there are even more people wanting to do it.

“Having seen the start list I know there are lots of girls coming out to race, and there are various distances, so there are 800m runners up to me doing 5K. So it’s quite a good distance on the road to bring all those people together.”

There is certainly a strong field for the race, which will reunite Courtney with European indoor champion Muir.

There is additional Welsh interest in the shape of Swansea Harrier Cari Hughes, who last winter won the British Athletics Cross Challenge event in Liverpool and represented Great Britain at the SPAR European Cross Country Championships. Last week she ran 4:25.19 over 1500m at the Loughborough International.

Bank Holiday Monday will see the running of the Vitality London 10,000m, which boasts a stellar field headed by Sir Mo Farah and featuring another strong Welsh contingent.

The men’s field features Josh Griffiths, who recently recorded a new marathon PB on the streets of London.

The Newport Harrier won the 3000m at this year’s Welsh Athletics Indoor International and finished fourth at the Welsh Cross Country Championships.

The women’s race features Jenny Nesbitt, fresh from being named in the Great Britain squad for the World University Games in Naples.

She will be joined by Cardiff AC team-mates Clara Evans, who last weekend finished a highly impressive ninth at the Simplyhealth Great Manchester Run 10K, and Charlotte Arter, winner of the Brecon Carreg Cardiff Bay 10K in March.