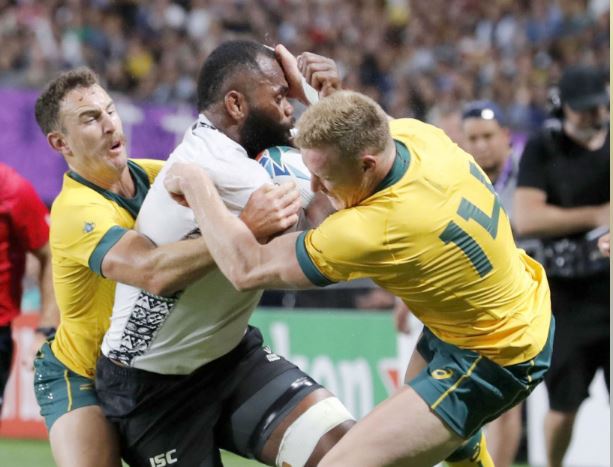 Australia’s media has reacted with fury to the decision to ban Wallabies wing Reece Hodge for three World Cup matches – including Sunday’s clash with Wales – for a dangerous tackle with Sydney’s Daily Telegraph describing it as “farcical”.

Hodge caught Fijian flanker Peceli Yato in the head with a tackle in the 26th minute of the Pool D opener in Sapporo on Saturday, but was cleared of an offence by the match-day officials.

He was cited on Sunday and will now miss Australia’s crunch clash with Wales on Sunday as well as the matches against Uruguay and Georgia.

“In a stunning decision that is sure to draw furious criticism from former players and fans alike who thought the tackle was accidental, the disciplinary committee found Hodge guilty of ‘an act of foul play’,” the Telegraph report said.

In a four-hour disciplinary hearing on Wednesday, the committee decided that Hodge was guilty of a red card offence but they halved the usual six-week punishment to three because of his exemplary record and good conduct.

Rugby Australia, several media outlets reported, argued he had been bracing for contact in the collision and turned his head away from Yato in a bid to avoid a head clash.

It is rare that Clive Woodward, who led England to their World Cup final victory over the Wallabies in 2003, gets much good press in Australia but his criticism of the decision was widely shared.

“Totally wrong decision, will have huge implications for the tournament – for me this is a yellow card and no more,” Woodward wrote on Twitter.

“Has any of those making this decision ever tried stopping someone as powerful as Yato by wrapping their arms around him? Good luck if you try that!”

World Rugby have made much of their campaign to rid the game of high hits and the fact that the match officials did not penalise Hodge even after reference to the TV pictures will be an embarrassment for them.

Without specifically mentioning the Hodge incident but perhaps to clear the ground for it, World Rugby issued a statement on Tuesday admitting the officiating over the opening weekend had not been up to scratch.

Totally wrong decision, will have huge implications for the tournament- for me this is a yellow card and no more @ITVRugby . Has any of those making this decision ever tried stopping someone as powerful as Yato by wrapping their arms around him ?- good luck if you try that ! https://t.co/GdI3rXO0Zr

There might be more embarrassment on the way for World Rugby after Samoans Rey Lee-lo and Motu Matu’u were cited for dangerous high tackles on Wednesday after only being shown yellow cards in their match against Russia.

Hodge can appeal the decision within 48 hours. Rugby Australia have yet to comment on the punishment.

“Players are more than aware of the sanctions, and hopefully we won’t see too many of them during the World Cup,” said McBryde.

“It’s a tough one. Anybody who has played rugby knows that things happen in a split-second.

“The aggressive nature and collision dominance that is spoken about in attack and defence means you have to be bang on the money.

“It’s easier said than done when the fatigue has set in. If the conditions are humid and players are tired, that is when errors are made.

“Things happen very quickly in a game of rugby, and some calls are tough and others are not so hard to make.

“It’s an ever-changing world in rugby with the influence the TMO (television match official) has. Players know they will have to do the utmost to keep their focus and concentration to not make silly errors.”

Wales continued preparations on Thursday for the Wallabies encounter, with centre Hadleigh Parkes and hooker Ken Owens both taking part in training after suffering knocks during a 43-14 victory over Georgia three days ago.

Lock Bradley Davies – replacement for an injured Cory Hill – has arrived in Japan and was also involved in training.

Sunday’s game is set to decide which team wins Pool D, with Wales hoping to back up a win against Australia 10 months ago by claiming another success, although before that result they suffered 13 successive defeats.at the Wallabies’ hands.

McBryde added: “Everybody realises the magnitude of this game.

“We know we can beat them, but other than that, this is a completely different tournament, a different game with a lot more at stake.

“We will take heart from the fact we know we can beat them, but it is different circumstances. It’s going to be a good battle.”

McBryde also rejected any notion that Uruguay’s shock Pool D victory over Fiji on Wednesday might have changed the group’s dynamic.

“It does not change our mindset at all,” he said.

“We are not looking further than the next game, and if we can beat Australia it puts us in a really healthy place.

“The Fiji game (against Wales on October 9) is going to be big, regardless of what has gone on.

“We know Fiji are a dangerous team on their day and will be hurting from that defeat, so if anything it will make them more dangerous.”