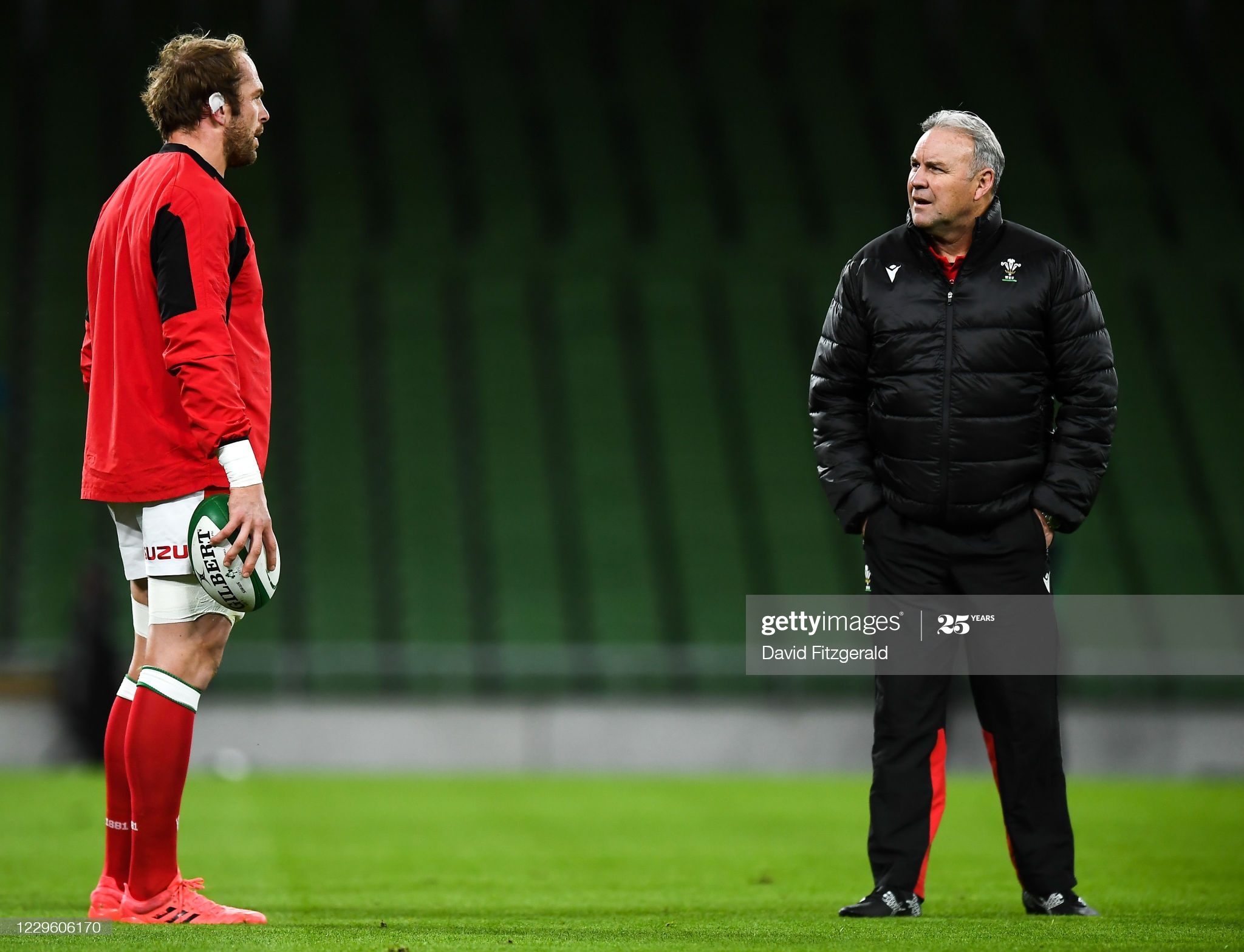 Alun Wyn Jones has jumped to the defence of Wayne Pivac – claiming the under fire Wales coach has steered Wales towards a “watershed moment” despite poor results.

The Wales captain – who leads his team against Italy today – has claimed Pivac has done more in nine months than would have been achieved in two years under Warren Gatland when it comes to blooding new talent.

Jones said: “Eight or nine new caps, previously you would not see that in two years. It could be a watershed moment in the way the new regime does kick on.”

It’s all a far cry from 2019 when Wales, with Gatland as their coach, won a Six Nations Grand Slam and reached a World Cup semi-final before Pivac’s fellow New Zealander stood down following the global showpiece in Japan.

Pivac is contracted to take Wales through to the 2023 World Cup but there is a break clause in the deal that can kick in after two years.

And Wales’ recent run of results has led some observers to wonder if that might be activated if the team don’t return to consistent winning ways anytime soon.

But Jones believes the emergence in recent weeks of a clutch of fledgling Wales players in the likes of Gloucester win Louis Rees-Zammit, Bristol fly-half Callum Sheedy and Cardiff flankers James Botham and Shane Lewis-Hughes will see Pivac vindicated in the long run.

“You have to give credit to Wayne,” Jones said. “I know I am inside the tent, so I can add that element of bias, but when you strip it back and look at the decisions of the management, he has stuck to his guns and continued to give people opportunities.”

Pivac’s hand has partly been forced by injury in some cases, with veteran lock Jones — who will extend an ongoing world record of international appearances with his 152nd Test this weekend — insisting: “It is good when you see young guys coming in and asking the right questions.

“They have not been found wanting.

“From a spectator and an outsider’s point of view, you only see the 80 minutes. I am fortunate to see how they operate and their application.”

The 35-year-old Jones has had plenty of highs and lows as a Wales player, with the Ospreys second row trying to lift the spirits of fans and players alike by saying: “I have the fortune and misfortune of being in similar positions before, and you do come out of it.

“I am comfortable with the fact that if my performances aren’t up to scratch, they will be as scrutinised as anybody else’s.

“Having someone (Pivac) at the head of the ship, who is continuing with a theme and backing what they say, I am comfortable to follow suit with that and support that.”

It all began forPivac with a 42-0 win over Italy in his first competitive international on 1 February and the new Wales head coach will be hoping for a similar result to bring to an end his first year in charge at Parc Y Scarlets today.

Then it was chasing Six Nations glory, now it is a battle to finish fifth in the Autumn Nations Cup. How expectations can change in less than 12 months. But 2020 has been anything but a normal year.

Whereas the Gatland era ended with a fourth place finish at the 2019 Rugby World Cup, and came on the back of a 12th Grand Slam, 2020 has been all about building for the future for his successor. Changes have had to be made, in style and personnel, and nine of today’s matchday 23 will go into the game with four of less caps.

Evolution or revolution? Take your pick. But the fact Pivac is shooting for a third win out of 11 games this year means the approach to date has yet to take off.

Hopefully, today won’t be one of those occasions when you have to watch the game through clenched fingers, but the weather has once again conspired against the free-flowing, running game that Pivac and his coaching team are aspiring to.

But it isn’t time to panic . . . yet! According to the one man who has been there, seen it all before and got every T Shirt, believes things are on the right track.

Jones has suffered the slings and arrow of outrageous fortune that so often comes with a Welsh rugby career, although there have also been many outstanding highlights along the way for the man who currently holds the world rugby cap record.

The calm, calculated appraisal of where the Welsh rugby captain sees his team at the moment should provide some context and support for Pivac. But a win over Italy should be a minimum standard if his side is to move forward with confidence into 2021.

A very, very Alun Wyn Jones moment. Wales have just gone 11-7 behind with seconds until half-time. He bolts after this restart, bullies everyone at the breakdown and eventually – not exactly sure how – talks Romain Poite into a scrum turnover. pic.twitter.com/OO2ZDMbUrA

“In the past it has been said Wales are slow starters in the autumn. That is a fact,” said Jones. “I won’t hide behind it as an excuse, but it has been accentuated more than ever because essentially we had two games, two weeks off, four weeks from a regional perspective and then into the campaign.

“It is frustrating from a professional and personal level, but I’ve had the fortune or misfortune of being through this sort of thing before and I’m aware you can, and will, get out of it.

“The evolution of this team started a long time ago, when Wayne came in for that Baa-Baas game post-World Cup. I think everyone forgets there were some radical selections, or wildcards or however you want to term it, even then.

The performance levels throughout the Nations Cup have certainly picked up as the new-look Welsh side has progressed. That has generally been the way for all Welsh sides and they will be meeting an Italian team in a similar state of transition, desperate not to end 2020 without a single win to their name.

“With regards to our performances, we have seen incremental development steps over the past four months. We have improved in patches, it is just putting it all together,” added Jones.

“It’s quite hard to keep the tide out at times. When you improve in one area something might drop off.

“We will put it together with potentially a more settled selection come the Six Nations. If we put some of those parts together we will get elements of consistency.

Getting a result today would be the perfect ending to Jones’ 143rd Welsh cap in his 14 year as an international player.

It will be his 11th game against Italy and he has nine wins to his credit to date. If the youngsters around him can make it a perfect 10 today then he will be a very happy man.

One thought on “AWJ: Wayne Pivac Has Done More With New Caps In Nine Months Than We Used To Do In Two Years”