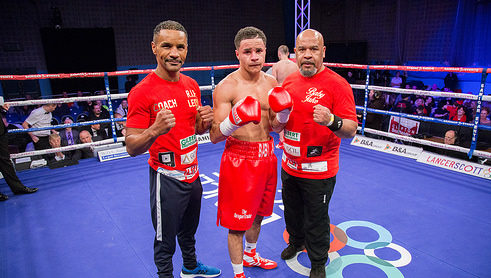 The main event may be Gloucester’s Akeem Ennis Brown defending his IBF European super-lightweight title against Bilal Rehman, of Rochdale, but the 11-bout undercard is full of exciting young home-grown talent.

The Cardiff featherweight said: “I’m really looking forward to getting back in the ring on Friday. I see myself getting the stoppage in this fight.

“I’m strong at the weight and my defence is good, so everything is in my favour. The fans should expect fireworks, because I’m going to put on a show for all of you.

“I’ve sold a lot of tickets for the fight and training has gone really well. We’re into fight week now and my routine is just to stay very relaxed and focused. I’m always on weight so it’s just about sharpening up the tools.”

Gething is back in action less than a month after his Welsh Area super-lightweight title win over Henry Janes.

The man of Gwent is glad to be back in action so soon against Spain’s Damian Esquisabel. “It’s been nice to go straight into another fight as it’s helped to keep my mind in the gym.

“In the past you may be a bit bored in between fights waiting for a date, so this time it’s been good to get focused straight away and back into something.

“I was very pleased with the win in my last fight. He was a good opponent and had a good ranking, so it was a great win for me. It was the first time fighting at that weight too, so I was happy that I won almost every round.

“I picked up the Welsh title, so it felt extra special with it being the first belt of my career. I’m in boxing to win belts, so long may it continue.”

Commonwealth flyweight champ Harris faces Jaba Memishishi on Friday night, buoyed by the news he has been made mandatory challenger for the British title and now the European title.

Harris, from Swansea, said: “I’m really excited for this weekend. All of the training is paying off and I’m fit and on weight. I’m ready to go in 2019, and this year is going to be a massive year for me.

“I’m mandatory for the British and the European titles, and they’re both great titles. I’d like to win both, so it just comes down to which opportunity comes up first. We’ll sit down and see which is best.”

The undercard is littered with Welsh talent including the unbeaten Maerdy middleweight with a 50 per cent knockout record Alex Hughes, who faces experienced Nicaraguan Wilmer Gonzalez.

Tonypandy’s teenage super-featherweight Rhys Edwards will be hoping to make it four fights undefeated against another experienced Nicaraguan Elvis Guillen, who is almost twice his age.

Swansea super-lightweight Jacob Lovell’s second outing sees him up against Plymouth’s Mohamed Mahmoud, who is searching for his first win.

The event will be shown live on iFL TV. Tickets are available on the MTK Global website.