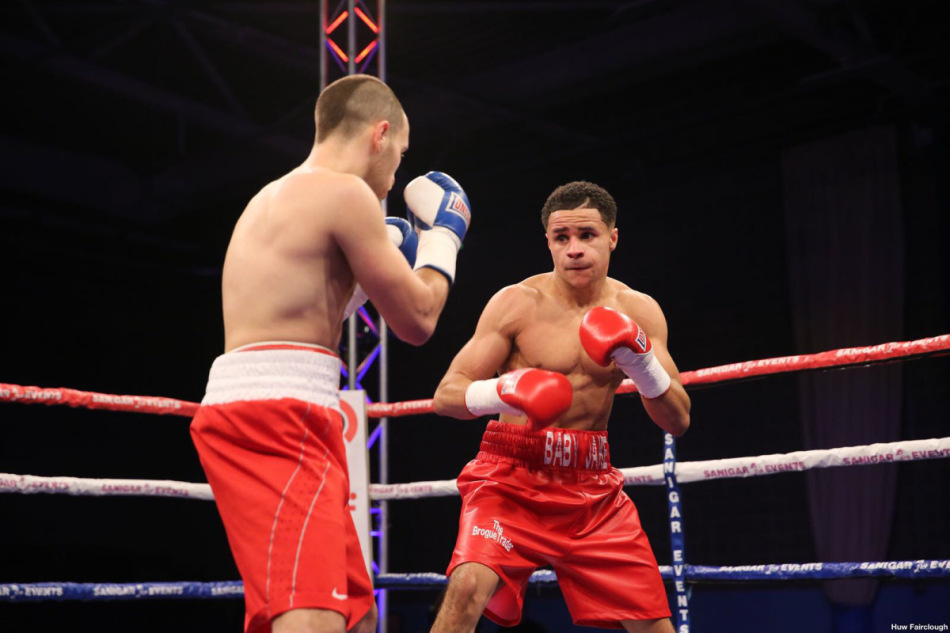 Jacob Robinson made it four wins from four.

Cardiff’s Jacob Robinson continued the unbeaten start to his professional career with a points victory in Neath on Saturday night.

The 24-year-old featherweight, who has a reputation as a dangerous counter puncher, dominated much of the fight to cruise to a points decision.

The 35-year-old Cajina was brought in as a late opponent for the promising southpaw and only really troubled Robinson in the fourth and final round.

The victory keeps Robinson on track for his goal of a Welsh title shot in his home city early next year.

Saturday night’s bout was just one of nine staged by Mark “Mo” Prior and British Warriors Boxing at the Llandarcy Academy of Sport.

The other highlights from the show – organised to showcase Wales’ boxing “young guns” – included Barry’s Maredudd Thomas registering his second knockout in the space of two weeks.

Son Of A Gun . . . Jacob Robinson’s A Chip Off Steve’s Block

The 22-year-old super-lightweight stopped Devon’s Shane Melden in the first round, having also inflicted a first round stoppage on County Durham’s Bradley Harris at the York Hall, Bethnall Green, at the start of the month.

Another super-lightweight, Jacob Lovell, made a winning start to his professional career with a points win over the experienced Michael Mooney.

The 19-year-old from Swansea moved up to the pro-ranks following a successful amateur career which saw him win a Commonwealth Youth Games silver medal in the Bahamas last year.

Maerdy’s Alex Hughes made a spectacular return to action following a 19-month injury absence with a first round stoppage.

The unbeaten middleweight ended the argument with County Durham’s Greg O’Neill thanks to a decisive body shot.