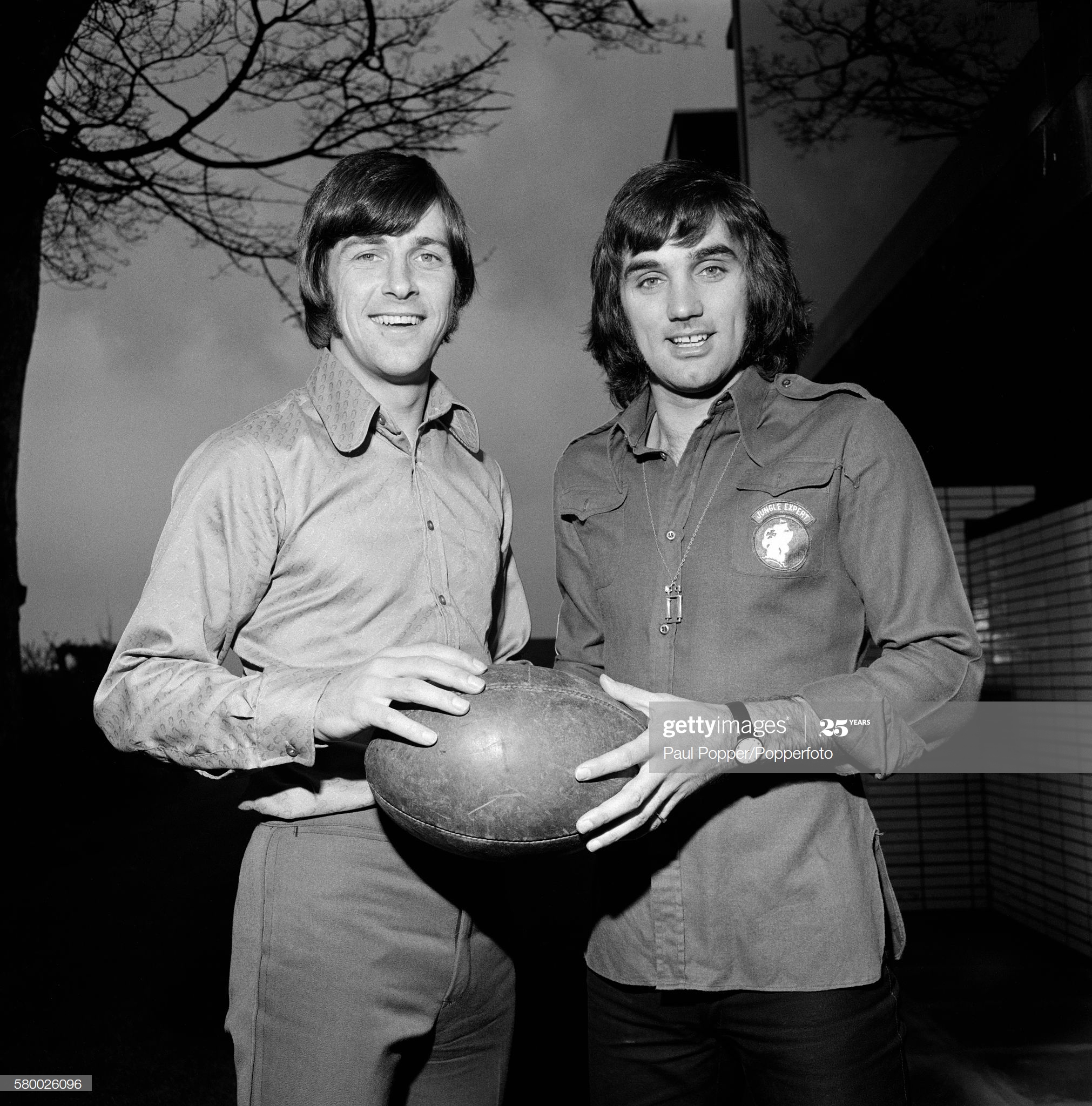 Barry John with George Best in the garden at Best's home in 1972. Pic: Getty Images.

It was meant to be a celebratory match, a feel-good occasion. And for 80 minutes it was. But when Barry John came off the pitch in 1972, he had decided something. He wouldn’t be going back on. Now, S4C have unearthed rare footage from that match which may offer some clues and pointers as Graham Thomas reports.

Barry John’s shock decision to walk away from rugby at the age of just 27 left a nation stunned – but not his one-time young rival, Phil Bennett.

Forty eight years on from one of the biggest sports stories of the 1970s, the dazzling genius of John – the player they called The King – remains accessible through YouTube clips or in the memories of those fortunate enough to see him play.

But it came to a sudden and mostly unexpected end on April 26, 1972, when the sport’s first global superstar played his final game.

That match – a Barry John XV against a Carwyn James XV, played as part of the 50th anniversary celebrations of Urdd Gobaith Cymru – is being replayed by S4C on Tuesday evening after rare footage was recently uncovered.

It may offer a few salient clues as to why a sportsman, who, perhaps, was not even at the peak of his powers, decided to announce his retirement nine days later.

There is a moment near the end when commentator John Evans asks James – who shared the broadcast duties as well selection – if that might be the last time they see John play at the National Stadium, to which the legendary coach gives a characteristically enigmatic reply.

The question proved to be very perceptive and even though most Welsh supporters found the news as perplexing as it was shocking, the man wearing No.10 for the opposition that midweek afternoon was less surprised.

“For the public back then, Barry’s decision was a huge sensation – but I have to admit that it was less of a shock to me,” says Bennett, who was 23 at the time and very much the heir to John’s kingdom.

“He was a huge star, there would be pictures of him and George Best in the newspapers of the day because that was the level of fame he’d had since coming back from New Zealand with the Lions in 1971.

“But Barry wasn’t a film star. He was young guy from a West Wales village and it was already being talked about that he found that side of things quite difficult.

“He’d go for a pint and there would be six blokes queueing up to get an autograph and ask him questions. He would go to some function and no-one would give him a minute’s peace.

“So, there were rumours among the boys that he wasn’t happy. You have to remember this was an amateur game. Barry played for fun, for the enjoyment.

“Yes, he wanted to win every game he played, but it wasn’t life and death to him and it wasn’t his job.”

The game itself was originally scheduled for Cardiff Arms Park, but moved next door when it became clear the demand was huge to see what was, in effect, a game between a Wales XV and a quasi-Lions XV.

In the end, 35,000 fans saw the John XV beat the James XV, 32-28 – a victory for the apprentice over the master in the sense that John had been the playmaking star of the 1971 Lions and James was the string-pulling coach.

In all, 22 of the Lions who had made history in beating the All Blacks less than a year before, took the field on what was a rare spring treat in an era when Wales played as few as three home matches a season.

John scored both the first try and the last try, book-ending the match and adding a neat punctuation stop to his career. Both scores are worth watching.

And then, puff . . . the player who ghosted through spaces others couldn’t even see, was gone. Luckily for Wales, Bennett was on hand to continue the razzle-dazzle for the remainder of the Seventies, but that didn’t soften the sense of loss even for the inheritor of the king’s crown.

“When the news came, I wasn’t shocked,” says Bennett. “I was more saddened by it. Yes, part of me thought it might help my own chances of getting picked to start for Wales, but hand on heart, I wasn’t jumping for joy.

“I was disappointed he was feeling unhappy and felt he had to turn away from the game and his teammates.

“There was talk at the time about commercial opportunities for him and that he could earn money from retiring. You have to remember we were all amateurs and both Barry and Gareth Edwards, for all their fame, were not getting paid to play rugby.

“Without any doubt, Barry was one of the greatest players we had ever produced. Some boys left to go and play rugby league, but Barry stopped because he’d had enough of the attention.

“I don’t recall any talk immediately after the match, but there might have been. If there was, it wouldn’t have been debated for hours. Some of us worked in the steelworks, or were labouring. We had to get up at 6am.”

It was said the final straw for John was when he opened a branch of the Midland Bank, a young woman curtsied before the King.

It was an abdication. And, at least until the Scarlets and the Barbarians played the All Blacks the following season, there was great sadness in the kingdom.