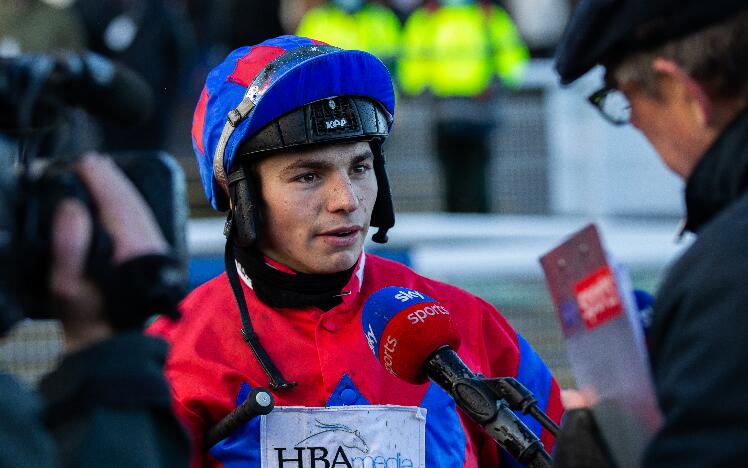 Jockey Ben Jones has admitted he only knew he had reached 100 career wins because his father Dai told him!

Jones Jnr recently celebrated the career milestone when he rode Beau Haze to victory at Chepstow to give him his 37th win of the season.

But the 22-year-old might not have spotted the looming century mark had Dai – Clerk of the Course at Ffos Las Racecourse – not kept a close eye on the rising tally for the young Welsh rider.

“I didn’t really realise I was near the hundredth winner until the old man told me I was one win away from it!” confessed Ben.

“If It wasn’t for him, I might have missed it! To be fair, he normally knows what I’m riding and where I’m off to before I do!

“But he’s played a massive part in my career so far. I wouldn’t be where I am now if it wasn’t for his support and guidance.”

Ben – who has three rides at Chepstow’s Beer and Cider Festival raceday on Saturday April 2 – has reached the century mark in only his third full season in the saddle.

We’ve been speaking to jockey @BenJone04644251 who recently rode his 100th career winner and he’s full of praise for his Dad @DFfoslas – here’s the story – https://t.co/HBYJFbwqQQ pic.twitter.com/a40Row9O1K

But victory on Beau Haze in the Ashcroft Services Handicap Hurdle last week was not the race in which Jones expected to reach his three-figures for winners.

“To be honest, I was going there with a small chance but luckily it paid off. It was a good day.

“It’s taken me two-and-a-half years to get to one hundred winners. It was two seasons to ride out my claim and that went quickly enough, so it’s nice to have the achievement.”

Jones has firmly established himself as one of Wales’ leading young jockeys with a string of highlights, including victory in the Ladbrokes Trophy Chase – formerly the Hennessy Gold Cup – on De Rasher Counter at the end of 2019.

More recently, he came home first on The Galloping Bear in the William Hill Grand National Trial handicap Chase at Haydock in February of this year.

“De Rasher Counter was probably the highlight so far, for me, a season or two ago,” adds Jones.

Well done jockey @BenJone04644251 – today he rode the 100th winner of his relatively short career when Beau Haze was successful in our 6th race for trainer Phillip Dando, the same person who supplied his first ever success in the saddle. pic.twitter.com/jDglGYkaDn

“Then, the Galloping Bear a month ago, which was another good win.

“I probably appreciate The Galloping Bear a bit more, because I was a five pound claimer when I won the Hennessey and I probably didn’t appreciate it as much as I should have done.

“I just thought I could go out and ride a Hennessey winner every year and that’s definitely not the case.

“When I won the big race at Haydock, I took it in a bit more.”

As well as paying tribute to his father Dai, a former Point-to-Point rider, Ben has also given thanks to the guidance of trainer Philip Hobbs and his stables at Sandhill in Somerset.

“I have been based with Philip Hobbs now for five or six seasons and feel part of the furniture. He’s been a great part of my progress so far, as well.

“I was there as an amateur for a couple of season, too, so there has been continuity in my progress.”

Fans of Ben will be able to catch him again at Chepstow on Saturday April 2 at the Beer and Cider Festival raceday, where he is booked to ride Jellicle Jewel, Wayfinder and the Philip Hobbs-trained Great Ocean.