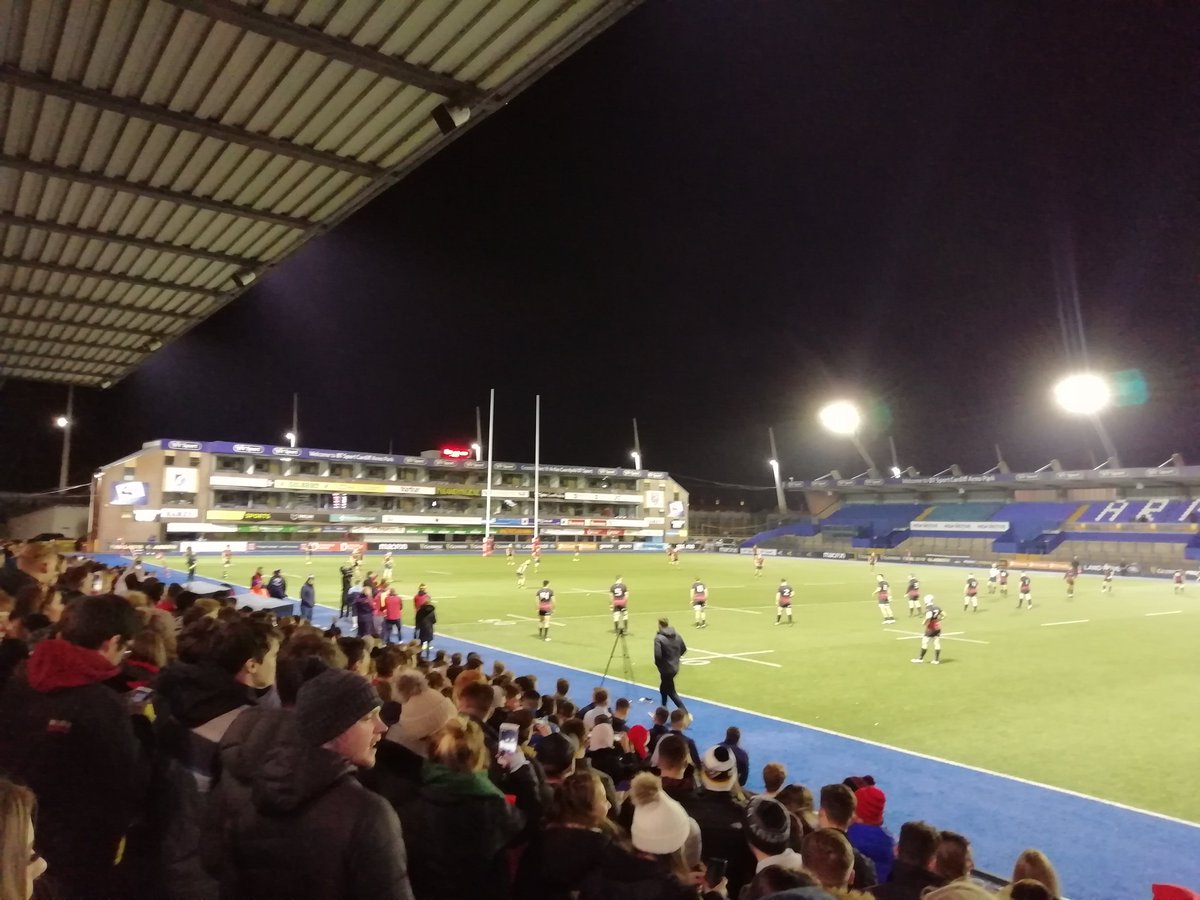 A crowd of 3,000 watched Cardiff Met beat Cardiff University at the Arms Park.

Cardiff Met have maintained their status as the big beasts of student rugby in Wales but coach Danny Milton has admitted they were given a scare by Cardiff University.

The Met’s 34-19 victory may look comfortable enough, but their win at the Arms Park – where 3,000 fans inhaled some festive spirit of one kind of another – was anything but.

Cardiff Uni proved a tough nut to crack in Wednesday night’s BUCS Super Rugby derby, but the result left one side sitting pretty at the top of the table and the other looking up at the rest from the bottom.

On a night when the underdogs dominated the game for long periods, and contributed so much to a wonderful occasion, it was a cruel twist of fate that Cardiff Met stole a bonus point try in the last move of the game to give the scoreline a completely lop-sided feel at 34-19.

“This is a crazy league. We were nervous coming into the game given the improvements Cardiff University have made since we last met them and they should have come away with more than they got from that came,” said Cardiff Met director of rugby Milton.

“They threw the kitchen sink at us in the second half and they really took it to us.

“We got away with a lucky one on Luke Northmore’s first try, but his second score was exceptional and allowed us to leave with a bonus point.”

FULL TIME | All smiles for the boys in maroon as they have control of Cardiff for another year pic.twitter.com/3t8qIdCurz

To make matters worse for Cardiff University, the two teams around them at the bottom of the table both won, leaving them propping up the table just before Christmas.

For 80 minutes they pushed last season’s runners-up to their limits, yet they got nothing out of the game and face a battle for survival in the New Year.

A disappointed Cardiff University director of rugby, Alun Wyn Davies said: “It was a great game, the fans really loved it and their back row played the break down really well.

“We could have tried to put some more width into our game at times because when we got to the edges we caused them problems.”

It was mayhem from the start and it took a 12th minute try from Cardiff Met skipper Aled Ward to calm things down as he picked up from the base of a scrum five metres out to crash through James Davies to score a try that Harry Johnston converted.

The Met outside-half didn’t miss a kick all night as he ended with 14 points to add to his side’s four tries. Having drawn first blood, many expected the more experienced Met team to take firm control of proceedings, but that wasn’t the case.

Cardiff University, with Wales Under 20 cap Ben Thomas at centre and Wales Under 19 international Cam Lewis at hooker, dominated territory and drew level with the try of the match from Thomas.

His centre partner, Man of the Match Rhodri Wall, made the initial running, Lewis supported him up the right touchline and then the front row man off-loaded brilliantly in the tackle to the rapidly approaching Thomas, who veered inside to cross at the posts. Owen Williams converted.

Johnston edged his side ahead with a penalty before the lack of a TMO came into play as the referee awarded a try after consulting with his assistant, even though the TV pictures showed plainly that Northmore had ended his brilliant 40 metre run by knocking-on and losing control of the ball before touching it down. To add insult to injury,

Johnston add the extras off the touchline to make it 17-7 to Cardiff Met at the break.

If the second quarter of the game had belonged to Cardiff University, the third 20 minutes was a similar story – apart from the opening three minutes after the re-start. Met kicked two penalties into the corner and finally came up with a pick-and-go try for tight head prop Harry Seward that helped to extend their lead to 17 points.

Back came Cardiff University and, after hammering away in the Met 22, they finally came up with their second try in the final play before lock Eduardo Balocco returned from the sin-bin. The try went to another of their Wales Under 19 caps, Ioan Davies, who somehow beat four men to score in the left corner.

That try came in the 66th minute and six minutes later the incessant pressure from Cardiff University saw them add a third try. Another quick tap and go at a penalty from livewire scrum half Owen Davies gave his wing Adam Sadbri the chance to charge up to the line and skipper and flanker Tom Wilson came up with the try.

Gutted for the lads last night but a positive performance and another W that got away. Can’t blame External factors so as the old man always told me. “If you have nothing nice to say, say nothing at all” ⚫️@CardiffUni_RFC

The conversion cut the gap to five points with eight minutes to play and at that stage anything seemed possible as, for once, even the ‘Cardiff Met Ultras’ fell momentarily quiet. Everything became fast and furious once again and a penalty 40 metres out allowed Johnston to kick a penalty to stretch the lead to two scores.

Then came the final kick in the teeth for Cardiff University as replacement scrum half Ellis Bevan put Northmore through a gap 35 metres out and the centre made it all the way to the posts to clinch the bonus point.