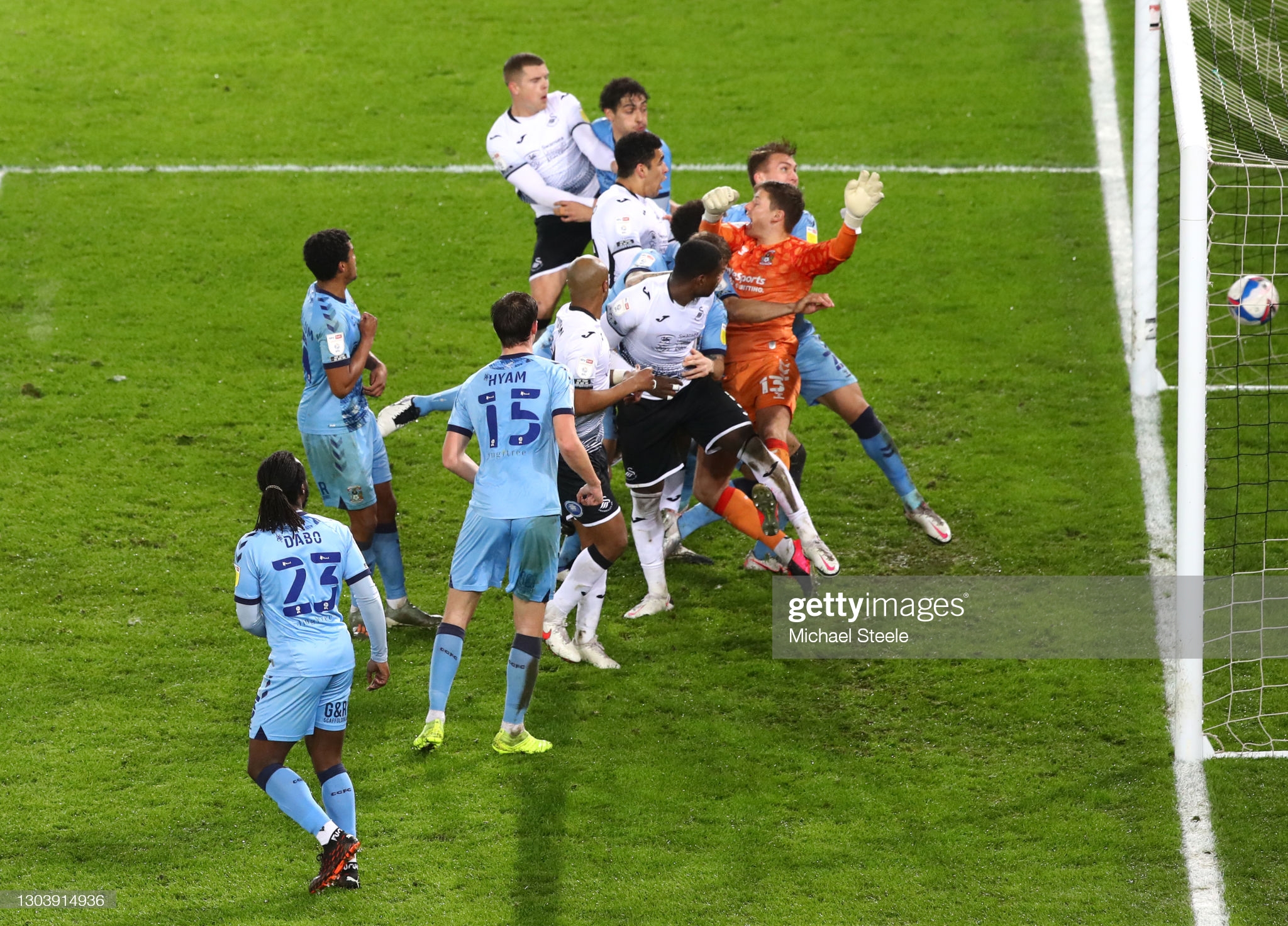 Steve Cooper praised Swansea City’s powers of recovery after they muscled their way to a vital win thanks to the broad shoulders of Ben Cabango.

The young Wales central defender used his strength, determination and imposing physique to get above Coventry’s defenders to head home and earn a 1-0 win over Coventry City at the Liberty Stadium.

It was enough for the Swans to claim a victory that keeps them in fourth place in the Championship, but just a point behind both Brentford and Watford – who also both won – with two games in hand.

For head coach Cooper it was also a welcome return to the tight defensive work that has been the team’s hallmark this season. They followed up their 4-1 hammering away to Huddersfield with their 17th  clean sheet in the league this season.

“I thought we deserved it,” said Cooper. “I thought we were the team who created the real chances in the game.

Best player for the swans tonight no doubt 💪

“Ironically, we scored from a set play, a wonderful delivery from Conor Hourihanne and a good header from Ben that we’ve seen more than once this season.

“I thought we created numerous chances in the game to win it more comfortably in what was a tough game.

“You saw the game at their place, we were quite happy with a point and we knew it was going to be tough. They had an excellent win at the weekend against Brentford and named an unchanged team.

“But I thought we were the superior team, created the clearer chances in the game.

“Freddie’s [Woodman] not really had a save to make, considering we had to defend a lot of long balls late on and set-pieces, we showed a good side of resilience.

“It wasn’t so much about Saturday, we’ll put whatever happens behind us and we’ll look forward.”

Cabango has now scored four goals this season – all headers – and his solid work in the centre of the Swansea defence was one of the main positives of a sometimes edgy performance, where the home side had to absorb a good deal of pressure.

Cooper was quick to praise the 20-year-old and added: “It’s a bonus having a player like that. It’s not a coincidence, that goal, it’s good technique.

“It was a brilliant delivery, one that Alan Tate had highlighted before. It worked to a tee, but it was down to the quality of the delivery from Conor and the desire of Benny to go and win the header.

“When you are creating good chances in a game and you don’t score, then sometimes you do need a different way to win.

“We got it tonight. People might look at the highlights and say they won 1-0 from a set piece, but we played well tonight, created some good chances, and I’m not overlooking that.”

Coventry were bidding to build on their unexpected win against Brentford and created two good opportunities at the bookends of the first half, but were unable to seize either.

Early on, they created space for striker Maxime Biamou but his shot lacked power. Then, just before the interval, the Frenchman had an easier chance but swung a volley wide from six yards.

Swansea took a while to find their own stride, but when they did, they also spurned openings with Jamal Lowe side-footing wide past the post before Andre Ayew inadvertently blocked a goal-bound shot from Jake Bidwell.

It meant a goalless first-half and a nervous opening to the second period for Swansea who struggled to find their normal fluency.

Untypically, they managed to break the deadlock with the most simple of goals from a set-piece in the 54th minute.

A corner from the right by Conor Hourihane dipped into the Coventry six-yard box and when the visitors’ defenders hesitated, Cabango muscled his way forward to plant a header past Ben Wilson.

As the Sky Blues pressed forward, Swansea enjoyed more space on the counter-attack and their lead was almost doubled by Lowe.

The striker was set free down the left, cut inside, and then curled a shot just inches wide of the far post. After a purple patch, the former Wigan forward is without a goal in his last eight games.

Swansea weathered most of what Coventry could whip up after that, although they were fortunate not to concede when Kyle McFadzean was allowed to latch onto a free-kick, only for the defender put the ball wide.

Coventry manager Mark Robins said: “It was a really poor goal and when it comes down to something like that its unforgivable. It was a brilliant ball into the box and Connor Hourihane has got a wand of a left foot. But we all know that.

“He put it into an area where we weren’t strong enough to stop Cabango coming though. He rose above our goalkeeper and it was a really poor goal for us to concede – lamentable.

“We were undoubtedly the better team tonight and I think we have been a bit unfortunate. We have got to be better because we are being punished for things.”